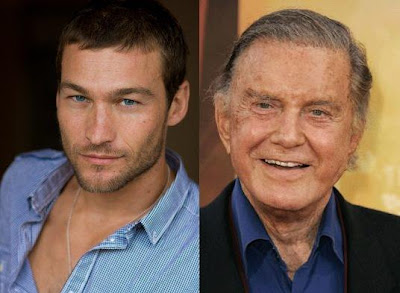 If things weren’t already feeling depressing with the 10th anniversary of 9/11, the day of the anniversary suffered yet another great tragedy to mark this particular date in the entertainment world. British actor and “Spartacus” star Andy Whitfield past away at the age of 39, on Sunday September 11th 2011. Whitfield was diagnosed with non-Hodgkin’s lymphoma in May 2010 and was undergoing treatment in New Zealand. During the 2010 Comic-Con he told Zap2It in a interview that he was feeling “better than ever” and hoped to return for the second season of Starz‘s hit show. But unfortunately the cancer had gotten the better of him, as he was forced to take an indefinite leave of absence in September of that year. Many had still hoped for a speedy recovery for him, but it was with great sadness that he had lost the battle. Whitfield’s wife Vashti said in a statement issued to The Associated Press. “He passed peacefully surrounded by love. Thank you to all his fans whose love and support have help carry him to this point. He will be remembered as the inspiring, courageous and gentle man, father and husband he was.” On the official Gabriel (2007) Facebook page an official statement was released by the production “The entire Gabriel family and community are deeply saddened at our loss of Andy Whitfield. We thank you for all your support over these past few years and know he was grateful for it also. There will never be another like him...”

…and if that news wasn’t depressing enough, Hollywood suffered the lost of another legend earlier in the week. Veteran actor and Academy Award-winner Cliff Robertson passed away of natural causes on Saturday September 10th. at Stony Brook University Medical Center on New York's Long Island, a day after his 88th birthday. Robertson is famously known for such roles as portraying President John F. Kennedy in the 1963 WWII film “PT 109” and for his portrayal of a mentally disabled man in "Charly" in which he won an Oscar for. Robertson never quite achieved reaching the top dog level in Hollywood like some of the other notable stars of his generation, but never once faded from the public eye even the 21st century. According to Evelyn Christel, his personal secretary of over 50 years, said that he died of natural causes. For modern moviegoers Robertson will be remembered as the kind hearted Uncle Ben in the Sony Pictures’ box-office hit Spider-Man films directed by Sam Raimi. Spider-Man 3 is noted down as his last official film appearance.
Posted by Clifford Kiyabu at 6:12 AM