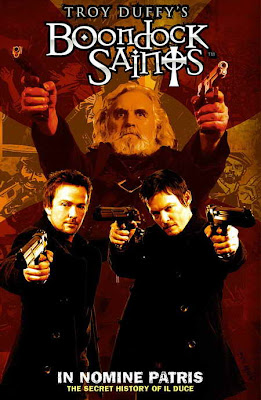 For many fans of the Boondock Saints franchise, there is only one defining moment that will fill them with pure ecstasy, and that’s the day that word comes down the wire that a new sequel is on it’s way. Sadly, that is not today. However, there is a light at the end of the tunnel, so to speak. A bit good news that will no doubt flutter the hearts of Boondock Betties everywhere. And that news comes to us in the form of a comic written by Boondock Saints’ helmer Troy Duffy and will serve as the perfect companion to the film series…

The BOONDOCK SAINTS' initial foray into comics is now available for pre-order in a collected edition chock-full of never before seen bonus material (on sale this November)! TROY DUFFY’s original BOONDOCK SAINTS film is one of the most successful independent movies of all time, with a fiercely loyal and devoted fan base - including 4.5 million social media fans and counting. With the hit comic series "IN NOMINE PATRIS", creator/writer/director TROY DUFFY launched the first "Saints" story to take place outside the iconic films. Written by Duffy and comic scribe J.B. LOVE, the comic series is the perfect companion to the films.

The story masterfully interweaves the events of the BOONDOCK SAINTS II: ALL SAINTS DAY with brand new material to reveal the secret history of the original saint, NOAH MACMANUS (IL DUCE) as he wages a bloody war against 1960's New York's Underground Crime world. The storyline is intercut with brand new adventures of the BROTHERS MACMANUS (The Boondock Saints) doing what they do best; doling out their special brand of justice to those that deserve it. "In Nomine Patris" brings a new chapter of the Saints saga to life while revealing the family legacy that created this trio of "Shepherds".

Featuring a forward by Connor MacManus himself - actor, SEAN PATRICK FLANERY - Join Troy Duffy and his comics team in this thrilling new Saints Adventure by pre-ordering the collected edition. This special trade paperback collects all six comic issues, never before seen art, a cover gallery, behind the scenes sketches and more. This is the collection the fans have been waiting for!

INNFUSION and 12-GAUGE COMICS are proud to announce THE BOONDOCK SAINTS, VOL. 1 TP: “In Nomine Patris”; NOW AVAILABLE FOR PRE-ORDER at Amazon.com, Barnes & Noble, Hastings, and all quality book and comic book stores across North America.

For a comic shop in your area, please visit comicshoplocator.com

Tidbit: Thanks to Wendy Shepherd over at Studio Matrix for sharing this.
Posted by Clifford Kiyabu at 1:38 AM