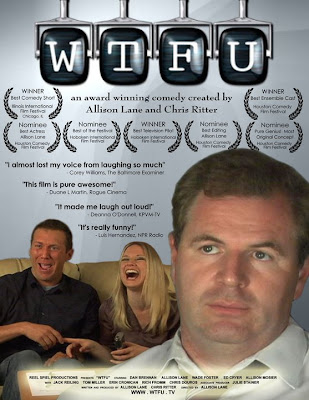 Plot: "The Producers" meets "Good Morning America" in this hilarious (and seriously wrong) 26 minute award winning comedy, based on the hit web series "The Morning Bitch"

The Story is about: based on the hit web series THE MORNING BITCH, WTFU is a hilarious short that focuses on a Long Island talk show producer (Brennan) stuck in a dead end job and wants to seek a more adventurous opportunity, but his boss, the president of the network, won’t let him out of his contract unless he pays back every cent he‘s ever earned from the network, so without many option left to his disposal, he finds a way to get himself fired but replacing the co-hosts of the network’s highly rated talk show and replace them with two rude, Obnoxious and racist individuals you’d ever imagine on morning television, but what happens when his plane begins to back fire on him?

My Thoughts: There’s nothing more undesirable than winding up in a dead end job. You know the type, one that allows little chance for new and existing creativity to happen (basically it‘s the SSDD routine). It’s a pain, having to wake up to such a feeling (or so I‘ve heard) and very often, the person going through it will from time to time question themselves: “Why do I do it?” Well that’s where this delightful indie short WTFU comes into play. WTFU is written by Allison Lane and Chris Ritter and is also directed by Allison Lane whom co-stars in it. 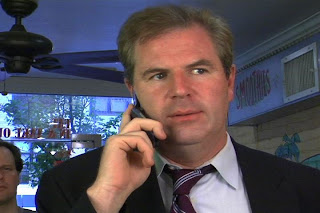 The film follows Dave Grayson (Played by Dan Brennan) a successful morning talk show producer for a Long Island based show called “The Morning Dish”. having worked this job day in, day out, for well over a decade, Dave wants something new, fresh and exciting in his life rather than the same old routine. And when he gets a job offer from a major international news agency, Dave doesn’t waste time contemplating over it and decides he’s going for it, only problem is, the contract he signed (Let this part of the story be a lesson for any one signing a contract, under no circumstances do you sign any contracts unless you and your lawyer has given it a thorough examination before you put pen to paper) with the job he’s currently with dictates that if there is a breach of contract on his end in any way he’ll have to pay back every penny with a percentage of interest added on. So being shit out of luck and jolly well F… well you get the idea, he comes up with the ultimate idea; if he can’t quite or convince the boss to release him of his contract, then maybe he can get himself fired by generating enough complaints into the station regarding the show he runs will be enough grounds to have him released of his contract. This of course leads to him changing his show “The Morning Dish” into “The Morning Bitch” (Yeah you read that last sentence right) and the end result is a slow of edgy humor that some might consider Taboo, but it works very well in this case.

While the film seriously lacks in run time (Sorry folks but it‘s a sort and only runs about 20-something minutes) it makes up for it with very acceptable acting and a slip of the tough sense of humor. This is of course all due to the talented writing by Allison Lane and Chris Ritter. The plot, though short due to run time, is very entertaining and relatable, but the real gem lies in the hilarious dialogue the film shovels out at you, and while the short doesn’t exactly serve as a prequel per se, it does set the viewer up for the source material that is also equally entertaining, as proof of this I had not seen any bit of “The Morning Bitch“ prior to viewing WTFU, but after viewing the short, I curiously enough decided to check out the webisodes which are available online for free and my conclusion is that though the film doesn’t feel like a full blown prequel, it does however, pay homage to the original source material and set’s the viewer up for the loads of shorts that await them online. WTFU may have its flaws, but it’s creativity and raunchy humor will have viewers laughing constantly at some of the most outrageous and edgy moments. 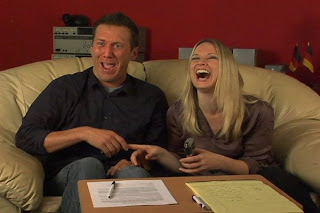 As for the acting: The acting was great, Dan Brennan as always did a fantastic job in his performance, he brought a real charismatic feel to the role that makes it incredibly hard to not like him, from the first frame, you’re already rooting for him. She can deny it all she wants, but it seems painfully obvious that Allison Lane is in fact the writer of this film seeing that her character had many of the best lines in the film, including some of the most memorable jokes I might add, one line in particular takes place in a coffee shop where she tells Grayson (Brennan) that her “Closest friends call me sugar t**s” her talented performance as Patty Foster was unbelievably funny and sometimes outrageous, and add that with her co-star Wade Foster as Hudson Lane and you good sir, have a charismatic duo who’s humor stand out great alone but is amplified tenfold when together on camera [Interesting fact: If you noticed, the last name to Lane‘s character is Foster, and Foster‘s character is Lane, which are the opposites of their real names vice versa]. Ed Cryer did a fine job as Sheamus Goldenblatt. Whats fascinating about Cryer, is that he has a natural presence about him that if comforting and brings a sense of wisdom to the character. Allison Mosier did very well in her supporting role as Shelly Tibbets, also in the supporting role that did extremely well is Jack Reiling who seemed to be the butt of a few sexual jokes in the film and as well as Chris Douros, Douros is no stranger to this film group as he has acted alongside both Brennan and Lane in various other projects which also includes “The Video Guys” and “Maggie Marvel”.

Final Say: WTFU was a highly enjoyable short and while the disappointing fact that it goes by way to quickly looms over it like fog over the surf of a lake, one could argue that it deserves a follow up or even dare I say, a full length adaptation to spring out of it someday. Either way it does execute its prime directive quite nicely, I won’t say it’s a masterpiece that rivals all other comedic short films out there, but it was no doubt a blast of a time to view and I recommend checking it out for what it is.

Copyright 2011 TCWreviews.com
All Rights Reserved
Posted by Clifford Kiyabu at 4:10 AM