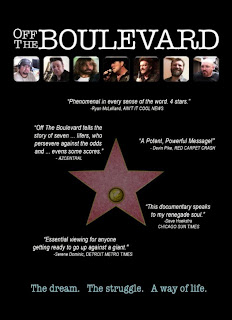 Attention! Calling all Boondock Saints and Boondock Betties! There’s big news regarding Director Troy Duff coming down the wire! First and foremost ,I should clarify with you that it has nothing to do with a Boondock Saints sequel… still here? Alrighty then, on to business shell we.

While this might not be the Troy Duff news you’ve eagerly been awaiting, it’s still interesting news about the filmmaker that should interest a lot of his loyal fans, a new documentary produced by the man himself called “Off The Boulevard” a documentary that is said to contain an inside look into the struggle that is the entertainment business and give viewers a newfound respect for the heart and effort put into making the media we’ve come to love and respect over the years.

Los Angeles - Troy Duffy (Creator of The Boondock Saints franchise) announced the pre-sale availability for the launch of a documentary feature film, “Off The Boulevard,” he executive produced in partnership with Santo Films.

“It’s an interesting and educational behind-the-scenes look at the struggles fellow independent artists go through in pursuit of their dreams,” says Executive Producer Troy Duffy. “It gives us an inside look at the tough lives of some up-and-coming independent artists. As we watch them fight their way through the industries of music and film, we glean words of wisdom from successful veterans of the entertainment business.”

“Off The Boulevards follows seven artists on different paths but with the same goal- to fulfill their dreams,“ says Jeff Santo, Director. “This film transcends the world of entertainment and my hope is it will inspire all who strive to pave their own road.” Ain't It Cool News claims it’s "Phenomenal in every sense of the word. 4 stars." Detroit Metro Times writes it’s "Essential viewing for anyone getting ready to go up against a giant."

Side Note: Interesting fact, this documentary is due out on September 7th which also just so happens to be a very special day for yours truly, awesome huh?
Posted by Clifford Kiyabu at 2:59 AM