First there was the unbelievably awesome pictures that surfaced of Tom Hardy as Bane earlier this week (Or last week depending what part of the world you’re currently on right now) and I guess a higher power heard my pleas for help as my prayers were obviously answered! Yes boys and girls, that’s right I’m talking about the newly released photo by Warner Bros. of the starlet Anne Hathaway in her Catwoman gear for next summer’s blockbuster hit THE DARK KNIGHT RISES. But there might be a motive behind the decision to release this photo in the first place, when you think about it, the magnitude of entertainment sites covering this film’s production is insanely ridiculous, and it’s making it ever more increasingly difficult to avoid being caught by members of the media with cameras, the photos below of miss Hathaway doing what appears to be, jacking Batman’s ride, the Batpod, is a perfect example to what I’m talking about and one cannot help but wonder if WB felt compelled to beat all these fellow bloggers to the punch with the spoilers for a change. Know that before you begin to venture down this post there might be some spoilers in the pics (especially the candid ones) so know that you’ve been warned [SPOILERS AHEAD] 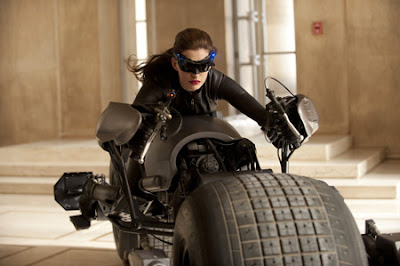 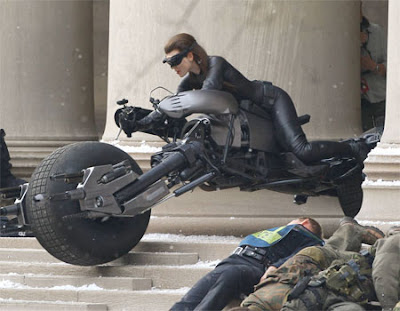 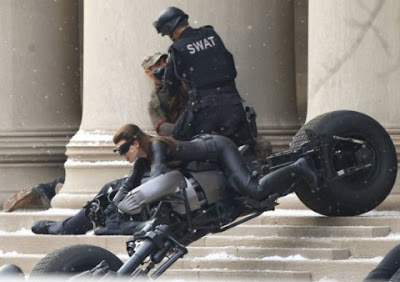 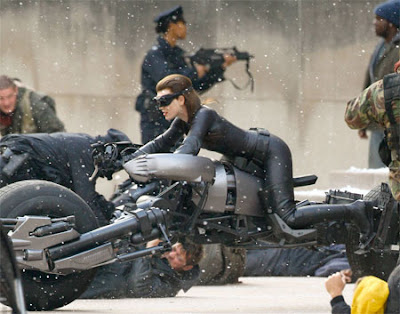 There is a slight debate among Batfans right now over the costume and argue that this might not be her official costume as there might be an entirely different one she’ll wear in the film, much in the same theme of Heath Ledger’s Joker who spotted a jean suit in the beginning of the film The Dark Knight that resembled noting to his official costume later in the film. But to counteract that argument is the fact that Badass Digest did an article about the suit back in June where an ‘insider’ gave a cryptic description of the suit and described it as more of a “Tactical” look then previous incarnations: "Anne's outfit is more tactical, like the comic book, than the previous Batman movies. She will definitely be wearing the goggles and it's going to be less sexy than Halle Berry and Michelle Pfeiffer's Catwoman costumes. She's going to look more like a robber." since the photos have surfaced the web has blown up over it, both in support of the new look and in utter outrage due to a serious lack in catlike features such as missing a tail and or ears to say the least.

Side Note: So what say you Boy and Girls, is Miss Hathaway everything you imagined she’d be as the sexy feline thief?

Extra Side Note: The previous set of photos of TDKR has left me with the conclusion that Lucius Fox better have a damn well good explanation as to why Bane and his goons have soooo many tumblers in their possession or else Bruce Wayne better fire his ass.
Posted by Clifford Kiyabu at 7:30 PM