Review: Before the Devil Knows You're Dead (2007) [Reviewed By Clifford Kiyabu] 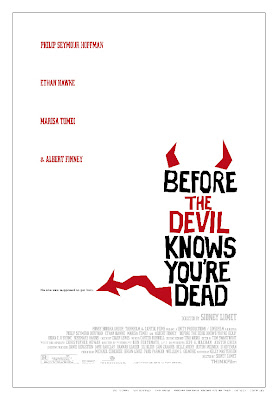 Plot: When two brothers organize the robbery of their parents' jewelery store the job goes horribly wrong, triggering a series of events that sends them, their father and one brother's wife hurtling towards a shattering climax.

My Thoughts: There is an age old question that at one point in your life will be ask of you. What would you be willing to do for money? Some would say they wouldn’t do anything involving braking the law like robbery or doing anything that would endanger someone else’s life for money, because money can’t buy everything and it certainly isn’t worth living with what you did for the rest of your life. Some will say anything so long as it won’t get anyone hurt. But the thing is none of us truly knows until we are pushed to the very edge of our limits, to a point where our very sanity is put to play, to such an edge where we become so desperately hungry for that extra buck that we would be willing to take that leap of faith to a point of no return, many of you that read this may disagree and say that you’d never do that, but in all honesty how do you truly know? How can you know until that moment when you are forced into that tight corner and the only we to get out is to do something you’d never imagine yourself doing, the very thing is what happens to the main characters in Before the Devil Knows You're Dead, they didn’t know what they were getting into, only that as individuals they had burdens to bare and great struggles to fight that had gotten so loud, so controlling that it got the best of them and in that moment of truth they were pushed into a corner and the only way out was simply one thing, one that wouldn’t hurt anyone, one that would easily be forgotten in time and perhaps even laughed about in years to come, or so they thought, what they did suspect was in this plan they had set into motion was a chain reaction of events to occur that would lead to misery, regret, and ultimately their self-destruction.

nothing about the plot or what to expect, only that it starred one of my favorite actors, Philip Seymour Hoffman, so with that said I thought it should be at least pretty decent, well what I got was more than just decent, it was a magnificent ensemble of storytelling, giving you an insight of each and every character and what their role has to offer to the plot, which of course I must point out that some may not like because the films does a great deal of backtracking for each and every one of the main characters, for example the film will focus on one particular character, like Hoffman’s character, “Andy” starting with his point of view on what’s going on, than it will backtrack to that point again, but this time with Ethan Hawke’ character, “Hank” and just like Hoffman’s character it will show his point of view of things until it reaches a certain point and then backtracks to the beginning again, essentially it will continue this cycle until it manages to bring all the main players of this flick from point A to point B, than it will repeat this cycle again but with point C to point D.

r and over again, but some (Like me) will enjoy this quite a lot because it shows us how everyone is affected by the actions of another’s mistakes and how the meaning of loyalty is put to play among family, which in itself embodies the very meaning to be human, after all it is human to want more than you have, and it’s certainly human to quickly have second thoughts about your very loyalties to those you love when something with more meaning to you comes across your path, and in this particular case, it’s a combination of greed and self-preservation, the will of survival outweighs that of family, which is beautifully presented between Philip Hoffman, Ethan Hawke and Albert Finney’s character, with Hoffman and Hawke they have this older brother, little bother love that sometimes falls into bitterness between them that really resembles how most siblings are with each other, Finney and Hoffman has this bitter father, son relationship between them that feels so real that one would think the two were actually related.

The story is about two brothers, Andy (Hoffman) an executive for a corporation who have been secretly stealing thousands of dollars from his company’s payroll to support his drug addiction is in a heap of trouble when the IRS decides to do an audit on his company he soon realizes it’s only a matter of time before they discovers it was him who stole the money, he goes to his brother Hank (Hawke), who is divorced and trying real hard juggling to pay child support, his bills and trying to keep his daughter happy, all with a wage that can hardly pay for just one, so desperate for the cash, he agree to help his brother out in organizing a robbery on their parents suburban jewelry store, for them it would be a helpless crime, one where no one would get hurt, and since the store and all its stock is insured, their parents would be covered. But what they didn’t anticipate was what would accrue on that particular day.

As for the acting; Philip Seymour Hoffman was a sight to see in this one, he steals the show with

an outstanding performance, which of course is what he always does, he’s what you’d call a rare type of actor, one that has the ability to transform himself into whatever role that is needed of him, some actors tend to carry the same personality in all their roles, as where Hoffman becomes the role, you’ll find that in a lot of his films the characters he tends to play are uniquely different for each other, this of course is always an A+ in my book, which is why he is listed down as a favorite of mine. Ethan Hawke was pretty good, although I felt his performance wasn’t up to pare with his previous performances, now don’t get me wrong, he’s a great actor, a fine one indeed, but I felt he just wasn’t giving it his all. Albert Finney was terrific, no matter what movie he’s in, whenever he appears on film he lights up the screen with his performance which is always nothing short of captivating and outstanding.

Marisa Tomei was wonderful, her performance very much up to pare, which was quite

enjoyable, and although I’m going to regret saying this later, I felt there was an overcast of nudity in this film, she spends a good 70% of her screen time naked showing full no nudity, I thought is wasn’t really all that needed, but I guess you could say that that’s what her character was really there for, so you could say that she was bad in all the right ways if you catch my drift. Michael Shannon wasn’t too bad himself, which is saying a lot coming from me; after all I thought his performance in last year’s film Bug (2007) was downright horrible, I do remember calling the film a waste of my money and time, time that was stolen from me and I’d never get back. I had also think the very same of his acting, but despite my thoughts in that lousy film, I found his performance to be less annoying this time, and actually thought he wasn’t too bad, perhaps there’s hope for him after all. And last but certainly not least, Rosemary Harris was delightful, I adored her performance in the Spider-Man films, now more so in this film, the only sad part was she’s not in it enough.

Final Say: I had a great time watching this film, and I think it’s mainly because I had no expectations what so ever, so not knowing what to expect and not wanting to in the first place made me really appreciate this film a lot, but like I said it’s not for everyone and if you easily get confused or can’t stand having to take multiple re-plays with the story that shos a little more each time, than I wouldn’t recommend seeing it, but if you still want to take the dare and see it than I highly recommend it.

Copyright 2008 TCWreviews.com
All Rights Reserved
Posted by Clifford Kiyabu at 6:33 AM