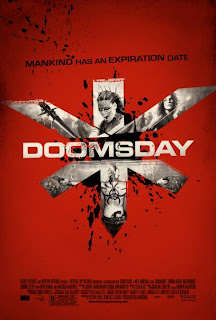 
If I was living in Britain this present day, I think I would have gotten myself a passport and flew myself across the United States to live here by now. Between “V for Vendetta” and the film that I’m reviewing, England has some serious explaining to do to people who actually believe this stuff. “Doomsday,” Neil Marshall’s third film, wasn’t originally intended to be seen by my working eyes. Actually, I was planning on seeing “Stop-Loss” its opening day, but since I couldn’t sneak into that, I walked into this instead. It turns out that I liked this one just a tad bit better than “Stop-Loss,” and got a lot more than what I expected.

What you got to know before watching “Doomsday” is that it is that you shouldn’t expected seeing a lot of plot here. If you’re going to see this movie at all you shouldn’t even worry about the plot first watch. Neil Marshall’s last film, “The Descent,” did stick to me as it did to others, but it doesn’t mean it was a bad film. “Doomsday” will be forgotten by the end of the year, and it is a damn shame. It is entertainment, with a capital E. The only reason it’s not capitalized when I just typed it was because Microsoft Word sucks dick.

“Doomsday” tells the tale of Eden Sinclair. (Rhona Mitra) When she was a little baby, she was shot in the eye due to people trying to get away from the Reaper Virus. Thirty years go by – they get everyone away from the virus by building a wall. But the virus still manages to break out through the wall, and a team led by Sinclair is set to investigate for a cure. Oh, and Malcolm McDowell is in this too. He just magically appears.

Neil Marshall’s “Doomsday” is a lot different from his last two features. While they were horror films, “Doomsday” is an apocalyptic sci-fi action thriller. It is nothing that this man has done before but it is probably his greatest achievement. It’s a lot of fun, the special effects are amazing, and there are heroes to cheer for. I don’t know if you notice this, but the last time I cheered for an action hero was John McClane last summer. Before that… I don’t think I have ever cheered in an action film like this.

From the opening scenes, I soon discovered it was hard not to enjoy this film. I saw it with three other people in the audience, and I realized that I wasn’t alone. The amazing finale totally makes the film. I can’t resist bringing up the fact that the sets are in perfect condition and look real. I also can’t resist to bringing up the fact that the direction and the cinematography are fucking amazing. The film is shot in some shakey-cam. Usually, I have a problem with this, but this follows the same formula as “28 Days Later” and “Cloverfield.” It is supposed to be shakey because we are seeing this from the point of view of these guys. So there are no complaints in my book about that.

The hero, played by Rhona Mitra, is honestly the most badass hero since Seth Gecko in “From Dusk Till Dawn.” With only one eye, she manages to kick some serious ass in every scene. A scene in particular is where she battles a big guy in an arena in front of thousands of people. They, like us, consider this to be entertainment. And we watch once she gets her hands on this guy…

The biggest problem I had with “Doomsday” is that sometimes the plot was hard to follow, but I’ll probably get everything down once I view the film a couple more times. There are a few plot holes here and there also, but I’ll admit – I was too into the movie to even notice them at first watch. Maybe in second watch I can find some of the plot holes.

“Doomsday” is a very enjoyable film. It’s a lot of fun, and not too many films are like this. Although if this was released in the summer-time, I would actually think that this would have made a lot more money. It’s more of a summer blockbuster than “The Happening” will be, and will be better than “Babylon A.D.” after it comes out.
Posted by TonyD at 9:05 AM