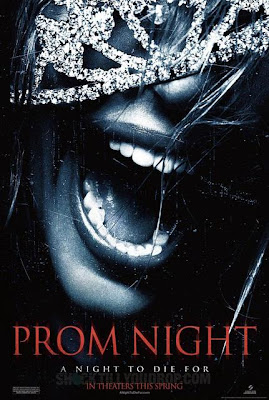 Plot: Donna's senior prom is supposed to be the best night of her life, though a sadistic killer from her past has different plans for her and her friends

My Thoughts: Senior Prom, the night that is supposed to be the best night of your life, enjoying yourself with your friends, your fellow school mates (even the one you hate) and of course your beloved high school crush, all one last time before graduation, frankly I think of it as all Bull S**. Yes, you heard me right, I was never found of Proms, never was and never will, the only thing I remotely like about a prom was a little known movie that came out in the 80’s called Prom Night (1980, ever heard of it?, no? will you should, it only starred Jamie Lee Curtis and Leslie Nielsen. It was an incredibly cheesy horror flick set in the late 70’s early 80’s with a total disco setting, hell even the killers mask had sparkles on it, and as cheesy as it I was, I still liked it, because it did what it set out to do, not like what Prom Night (2008) does, with the remake, well I hardly can call it a remake, because pretty much everything that was the original and been altered and re-written so much that there isn’t much left that resembles the 1980’s classic. What first off the part that made the killer in the original so fun to watch was the mystery, you never knew who was behind the mask until the very end, and it keep you guessing, with the remake, the killer identity is reviled to you within the first five minutes of the film, also they changed the killers background from being someone from the main character’s past, into one of her former teachers who was so obsessed with her, he went crazy.

Plus the killer doesn’t even carry the signature mask or axe like in the original. I always say

when making a movie with an iconic slasher such like this, the killers appearances is always important, He /She must wear something that will have them outstand to others such like; Michael Myers, Freddy Kruger, Jason Voorhees, when creating such a character they must bear some kind fashion statement, something that will keep them in your mind long after the film has finished, but with the killer in the remake doesn’t wear anything special or worthy of remembrance, in fact what I did find was as soon as the film was over I had quickly begin to forget the killer, it isn’t that he wasn’t psychotic enough or cold blooded enough, no, it’s just he seemed too regular and not stand out enough like other psycho killers, I found more chills and thrills (if any) in the bad acting the actors provided on screen, and speaking about chills, the other problem this film suffers is it spends too much time building you up with anticipation for a good scare but never arrives with the goods, and while I’m on the subject, I must say; the killer spend just about all his screen time popping out of nowhere stabbing people up with random objects, and yet, there is not a drop of blood to be seen anywhere on screen!

This ether means that someone on set didn’t think anyone would notices such a thing like this or he’s got to be the cleanest killer I’ve ever seen n my life. It’s obvious they did this intentionally

for a PG-13 rating from the MPAA so they could get a bigger audience (Teenage viewers) which only stirs up another question to mind; if they planned it to be made PG-13with hardly any bad language and little or no blood with zero nudity, than why the heck did every actor playing a teenager have to be over the age of 18? I mean I can’t say for sure, but all the actors whose ages are listed on their IMDB are 21 and older. So again I ask why adults must continue to play the roles of children. I mean if there isn’t anything involving breaking any laws than a kid should play the role as a kid, right? Well apparently I’m wrong according to the filmmakers and the bigwigs in Hollywood. And lastly, if you plan to make a horror film don’t go shy on the blood, a horror film with no blood is certainly not a horror film I’ll enjoy, the whole point is to see gore, to see blood, to see the unspeakable happen to someone because it’s what we the moviegoers want, and isn’t making something that will please the moviegoer the whole point of making a film in the first place.

with her friends only to see her whole family killed by her high school teacher Mr. Fenton (Schaech) a sickly obsessive man who’ll do anything in his power to have her all to himself, fortunately for Donna he is caught by the police and put behind bars before he could do her any physical harm, now fast-forward three years, Donna now 17 is slowly returning to a somewhat normal life living with her aunt (Gilsig) and uncle (Ashby) and getting ready to have fun with her friends at her senior prom, it may have been three years but Mr. Fenton hasn’t forgotten her and wants her even more now that he’s been locked away from her for so long, and unfortunately for Donna, he’s broken out of prison for this special evening and has plans of his own with her and her friends. Senior prom will never be the same after this.

As for the acting; I can’t stress enough how badly done the acting it, never have I seen actors give such sloppy and lazy performances in my life, Brittany Snow,

an actress who I thought was going places, after seeing “Hairspray (2007)” I said “wow, this girl’s going places” but obviously I was wrong, her acting was badly off key to the moments that demanded strength and power, but instead what was given on screen was rather weak, but then again the character she played wasn’t exactly anything worthy of offering something up ether, just like her role, she was simply unlikable. Scott Porter was much ether; I expected a lot more from a guy who acts in a NBC hit show like “Friday Night Lights” but now I can’t see what others see in him, I mean he’s supposed to be portraying a loving kind boyfriend to Brittany Snow’s character, but what I got was this unlikable, and somewhat annoying character, his acting was poor, and no matter how much he tried to get you to see him as the good honest dude, I keep seeing a douche bag jock who’s only dating her so he can get into her pants, so not the knight in shining armor he was trying to be.

Dana Davis was alright, but I felt she was just way too old for the part (Age 24) and that I

thought she could have done a much better job than what she did, but hey the film sucked to begin with so it doesn’t really matter right. Collins Pennie was somewhats entertaining, but still lacking in his performances, I felt that 70% of the time he was just reading lines and not trying to act them out. Idris Elba (the only real talent here) was surprisingly good. It’s just sad that his talent is wasted here. And lastly; Johnathon Schaech was not so bad in his performance, he just didn’t stand out as I hoped he would as the killer, it’s not that he’s a bad actor, it’s more like he was trying too hard to be scary than actually being scary, I mean I would have gotten more chills out of watching a monkey walk around with a loaded gun then seeing him trying to scare you… than again a monkey with a loaded gun does sound kind of scary [Laughs] .Hmmm, note to self write screenplay about monkey with a loaded gun.

Final Say: This has got to be one of the worst Horror remakes I’ve seen so far (and remember I’ve seen House of Wax (2005)) the thing that makes this film so bad is the poor acting fallowed by poor plot line, which wraps it all up with bad editing and audio, over all, don’t see this movie, save your money and the Hour twenty-eight minutes of your life doing something more meaningful like reading a book or watching flies F***, or reading a book on flies F****ing, you pick. But as always if that Curiosity of your is still picking away at you than watch at your own risk.