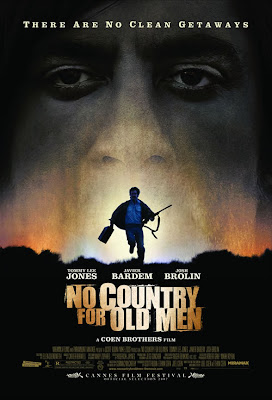 Plot: Violence and mayhem ensue after a hunter stumbles upon some dead bodies, a stash of heroin and more than $2 million in cash near the Rio Grande

My Thoughts: The legendary Coen brothers have yet again brought us another masterpiece with, No

Country for Old Men which is probably one of the best films in its genre I have seen in over the last ten years or so, and believe me I’ve seen a lot of films over that time, some more than once, well I can tell you that the story alone is something that had me at the edge of my seat from the very start, it is downright breath taking and had me yearning for more each and every minute of it, the thing I liked mostly about and the story is how Coen brothers handled it, unlike other films it is hard and coldblooded, not afraid to tell it like it is even though you may not want to hear it, with it’s in your face suspense and insane action that is without a doubt guaranteed to leave you with a awe on your face, now for most of you who don’t know who the Coen brothers are, they are Ethan Coen and Joel Coen, the same guys who brought you such magnificent films like The Ladykillers (Reamke), O Brother, Where Art Thou?, The Big Lebowski and of course how can I forget one of their biggest films of them all, Fargo. But out these are nowhere near to that of No Country for Old Men, because with No Country there is no good and evil. Just men, men fight for what’s there’s, men who running for their own survival, and men who kill for the sake of principals. There is a great deal of depth to the plot, for some this will be a golden ticket to a wonderful film that’s not afraid to be just what it is and not something it isn’t, this is most certainly something some won’t be able to fully understand because a film like so is more so than just another run of the mile movie, no, it is purely poetic in its message which reads clearly as daylight, “There Are No Clean Getaways” everyone must face their demons one way or another, and it will come to pass rather you like it or not, or more so rather you’re prepared for it or not. The film falls in a somewhat rather gray area, one that most people would have a hard time to define. I mean what would you do if a day came where you stumbled across a drug deal that went horribly wrong leaving everyone dead and two million dollars in untraceable bills left ripe for the picking? Some would say “oh no I would turn it in to the authorities”, but aside from what you would say, and with all honesty you know that deep down in your heart you’d keep it, I know because I’d probably do the very same thing without hesitation, it’s a flow in your very nature to do so or at times to think it, no doubt, but it is human to be flowed naturally? Greed is in all of us, even the ones who deny it.

Now I’m going to be completely honest with you here, I did not in fact read the book this film is

based off of, however I did do research on it, I felt it would be unfair to write a review on a film I know nothing of what it was based off of, so to what I’ve learned is the movies leaves some things out, for those of you who read the book you wont need to see it because you already know the answers, but for those of us who didn’t see it, it will leave you somewhat hanging with only your imagination to answer what may or may not have happened, so I suggest you pick up a copy of the book and give it a read, even if you want to see the film first, read the book after and you’ll be able to picture the actors as the faces to the characters in the book and you’ll at least understand the full story including everything they left out, which I might add isn’t much at all because the Coen brothers combined most of the book into film quite beautifully, especially the ending which I believe some people will not be able to stomach. Now I’m not saying it’s extremely gory or anything, well actually the film itself is pretty gory, but the ending is in a way somewhat negative that some may not like at all, but those who don’t, obviously have missed the overall big picture which in itself is quite negative and like I’ve said, poetic, so take it as a love it or hate it type of films, for me, it was a love it film that has me agreeing with the Oscars that it deserved the best picture win it got this year.

The story is about a local Texas hunter named Llewelyn Moss (Brolin) stumbles across a drug deal that went horribly wrong, noticing that two million dollars in cash and none of the drug

dealers are left alive but one man who is barely alive he decides to take the money and leave, however he has a change of heart and decides to help the poor guy out if he is still alive, only to find gunmen arriving to the scene looking for the money, he quickly goes on the run for his life as they are hot on his trail. Meanwhile the other a man who goes but the name Anton Chigurh (Bardem) a man who is hired to find the man who took the money and bring it back, thing is Chigurh does not kill for the money, no he kills for the principal of killing and the thrill of it all, and when he makes a promise to kill he intends to keep it, now Moss finds himself mixed in a game of cat and mouse with Chigurh, a game he might not win. And while all this is going down, a county sheriff named Ed Tom Bell (Jones) is not too far behind both of the men the whole way just trying to figure it all out before it’s too late.

As for the acting, well I can tell you this Tommy Lee Jones was

fantastic, his acting and his accent was extremely authentic to the people of Texas which really show how much a great actor he really is. Javier Bardem was brilliant, when I saw him in Goya's Ghosts I thought his acting wasn’t all that good, and I knew he acted in 2004’s Collateral but to be honest I don’t really remember who he played, so I must have not been impressed with it ether, but after seeing him in No Country, I was deeply impressed with what I saw, he embodies the very evil that is in this would without even say much of a word, to do that demands a great deal of talent with body language, which is what he gives. Just seeing him on screen brought shivers down my spine that made want to know what was going to happen next and at the same time feel sorry to whoever was going to be getting it, I look forward now to Bardem next film. Josh Brolin was spot on, he gave a spectacular performance, which has a funny back story to it, you see one of the things I love to do when I’m writing a review is doing a little research on the film I saw, and what I learned was this little bit, Joel Coen and Ethan Coen refused to give Josh Brolin an audition for the movie, so he asked director Robert Rodriguez to help him shoot an audition tape while Brolin was filming his Grindhouse (2007) segment (Planet Terror (2007)) for Rodriguez. Rodriguez shot and Quentin Tarantino directed the tape, which was shot in a $950,000 digital camera. Marley Shelton, who was playing Brolin's character's wife in Grindhouse, agreed to read the lines for Llewelyn's wife Carla Jean (eventually played by 'Kelly Macdonald) so when I read this I thought wow, he was really determined to play the role Llewelyn Moss, and after seeing it I can’t imagine anyone else ever playing the role now. One of the few flaws I saw in this was Woody Harrelson being underappreciated, such a talented actor who gives it his all and he’s barley in the film, it’s just a shame if you ask me, but like I said, it a small flaw in the movie, one of very few. Kelly Macdonald was wonderful she really became the role in this one which I was very happy to see.

Final Say: I just fell in love with this movie; it exceeded my expectations to such a level I never thought I’d be this satisfied, it is more than just worth the watch, it (in my opinion) is worth buying, and it is by far worthy of being called best picture of 2008. I highly recommend it.