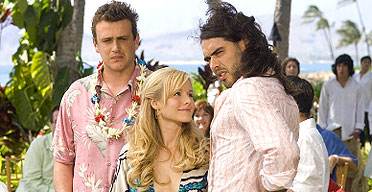 We are now in the midst of a treacherous tidal wave of new cinema: the lewd, crude and highly sexual cinema. It's the kind that produces movies that really hone in on the sexual world that we are a part of today; in a comedic way. With each film that comes along in this genre it's always the newest film pushing the envelope farther and farther from its predecessors. Just refer to "40-year-old Virgin," "Knocked Up" and "Superbad." Now we can add "Forgetting Sarah Marshall," a sexual breakup comedy, to this infamous list. All of these sexual comedies, especially the latter, make past movies of the same genre ("American Pie") look like child's play.
What's so cool and special about these raunchy comedies are the fact that they're made possible by the same group of people. This group of people all answers to writer-director-producer Judd Apatow. He has the knack of putting movies out to the public that involve his favorite people to work with. He gives the director here, Nicholas Stoller, his first crack at success. It shows he's a virgin to directing when the film looses its mirth in the second act.
When you look at the cast of "Forgetting Sarah Marshall" it can be the cast of any of the movies that I recently stated above. You know you're in store for something daring and lewdness so crude that it makes you not want to watch their films with anybody except for your friends.
Each of the films that Apatow is at helm at, there's always an involvement of such a simple plot and a mediocre looking guy surrounded by unexplainably hot and sexy woman. Peter Bretter (Jason Segel, who wrote the script full of hilarity and current event references) is the mediocre looking guy who has the dream of creating a puppet musical version of "Dracula." He has the job of writing "ominous and dark" tones for the hit show "Crime Scene," of which his girlfriend Sarah Marshall (Kirsten Bell) is star of opposite of William Baldwin's character.

We learn Sarah and Peter's relationship through ways of flashback scenes because as the movie opens she comes to his messy apartment to break up with him. This is when we receive the 'etched in your mind' moment of Peter's penis. Segel (known from the series "Freaks and Geeks"), by doing this scene, shows his balls in a different way, reacting as if his world has just collapsed from under his feet and no clue where to turn next in life.
His stepbrother (Bill Hader) has the idea for Peter to get away on a vacation to Hawaii to get away from the situation. Here he cries himself to sleep but also finds new life in a smoldering receptionist of the resort Rachel Jansen (Mila Kunis). She let's him use a $6,000 condo until it's rented out by Dakota Fanning. Soon he finds Sara here with her new beau, British singing sensation Aldous Snow (Russell Brand). This sets up the bulk of the movie in Hawaii where the two couples endure late night dinners, bonfires, arguments and of course sex.
It's Brand's character who is the glue to the film. He's discharging a state of tranquility throughout the entire film even when tension is at its highest. He's trying to befriend Peter instead, like other movies would depict, of crushing him like a little bug. The two are polar opposites from looks to occupation (he's a star singer and he's a struggling one).
Along the way and around the corners of this Hawaiian resort are the familiar faces of Paul Rudd who plays a stoned surfer instructor and Jonah Hill as restaurant waiter obsessed with Aldous and also selling drugs.
All of Apatow's movies focus on men, who are really boys at heart, being dragged away from their comfort level and into a world where they feel awkward and vulnerable and how they deal with such situations distinguishes them from the norm. He has the aptitude of creating such sloppy and kiddish men and turning them into such hunks, who have the luxury to bang gorgeous woman at the drop of a hat, who occupy such deep feelings. Now Mr. Apatow lets turn the tables and focus on a mediocre looking woman who's swamped with handsome men.
Posted by David Dominic DiMichele at 5:58 AM