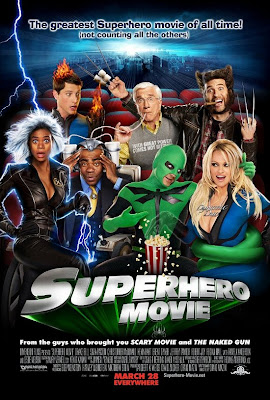 Plot: A Comedy that spoofs superhero films, from Batman Begins to Fantastic Four.

My Thoughts: You know there once was a time when a Parody film meant something to moviegoers, yes boys and girls, I’m talking about the good old days. A time when people like Mel Brooks, Jim Abrahams and David Zucker and the original Monty Python crew could make us laugh so much we’d leave the theaters in tears from laughing so hard and maybe wetting ourselves just a little from the comedy they projected to the audience [Laughs], this of course was a time when we had such magnificent films like; Blazing Saddles (1974), Monty Python and the Holy Grail (1975), Monty Python's Life of Brian (1979), Airplane! (1980), History of the World, Part I (1981), Airplane II: The Sequel (1982), Monty Python's The Meaning of Life (1983), Spaceballs (1987), The Naked Gun: From the Files of Police Squad! (1988), Robin Hood: Men in Tights (1993), they had made films that wasn’t just funny, no they made comedies that was intelligent, that they could get the viewer using their brains while laughing, this was back whenever you’d heard star names like; Dom DeLuise or Leslie Nielsen. You would be out the door heading to your nearest theater near you without thinking twice. Oh yes this was defiantly the golden years for spoof films, when I, and people like me who enjoy the true art of Parody films we remember those fine gentlemen as GODS of the genre.

And yes a Parody film isn’t just something dumb to laugh at, it’s an art, one that hasn’t been

treated the way it should be treat and has been bastardized by today films who try to hold clam to the title Parody. I cannot stress how much it kills me to hear young people say how good Date Movie or Epic Movie was. Or how they rolled on the floor laughing while watching Meet the Spartans. I look at people like this and can’t help but roll my eyes at them and want to say “What The F*** did you just say to me?” Because obviously they do not know what real spoofing is, before whenever such a film was made, it was made to mock a specific time, place or entity within the pop culture region, which no matter how idiotic or outrageously silly it may be, it still came off as funny and had the viewer using their mind alone the way, making them come up with the conclusion to what they are spoofing and not having to explain it to you as if you’re a 4 year old which I’ve found to be very irritating in now days films and often I find myself somewhat humiliated watching such, even when I’m alone, but I do it because I’m just an informative king of guy who likes to make sure no one else has to endure the pain and suffering that is modern Parody.

c Movie. Superhero proves to have (well I shouldn’t say “have” because that would imply that it has something worth watching when it doesn’t) some potential to it, a few moments here and there that maybe prove to be somewhat humorous, the bad art is that all it ever is, a few moments and nothing else, which of course is sad because just like the other films it had the opportunity to be great, it had a decent concept to its plot written down, but failed horrible in bringing it to film. The problem that it suffered is the very same thing that all other films in its genre suffers in this new millennium, and that is it focuses too much on contemporary pop culture with it including every celebrity screw up that happened within the last few months, I mean come on, I don’t want to see a joke about something a crazy celebrity did just a month ago! No sir , if I want to see that I’d just go the main source and see the real thing, but it seems that these mainstream filmmakers don’t see that and continue to make crap after crap film, now with Superhero Movie what I mean by it had the potential to be good was because the idea of spoofing all these Comic book films coming out every years isn’t a bad idea so long as it is made right, which this movie fails to do, instead of spoofing all the comic book films with their own brand of originality they decide to go and not only re-enact exact scenes from films like Spider-Man, Spider-Man 2, Fantastic Four, X-Men, Batman Begins, they go and also include the superheroes by name and costume design in the film which is by far the most lamest, saddest and unoriginal thing I’ve ever seen.

couldn’t they make this Parody without having to stoop so low as to rip these movies off?” because there are so many ways they could have spoof these films without having to include the characters from these fine films, but then again I should have seen this coming, after all this is written and directed by none other than Craig Mazin, the man who was behind writing and Producing such horrible spoof films like; Scary Movie 3 and Scary Movie 4. Normally I wouldn’t attack the director like this because the film directors are always under constant stress when in pre-production, during filming and during post- production, so I usually give these guys a little break, but with Craig Mazin because the man has yet to show me he’s worth a damn, anyone who’s seen his past film know all he’s good at is ripping-off other films with jokes a four year old could have done, and his work as a screen writer hasn’t been very impressive ether with the third and fourth Scary Movie films on his record as Writer/ Producer is nothing to smile about, after all it was the Wayans brothers comedy crew who made it funny and after he took over as one of the writers it fell hard down to so ridiculously dumb, which was direct mockery to what the Wayans brothers originally set up for the films. Well that’s what we get for this film, Superhero Movie, instead of taking it in a new more original direction than the past Parodies, he just does the same thing with a different name attached to it is all.

The story is about a young boy named, Rick Riker (Bell) who lives with his aunt (Ross) and uncle (Nielsen) and after being bitten by a genetically altered dragonfly, Rick Riker develop superhuman abilities like incredible strength and armored skin. Rick decides to use his new powers for good and becomes a costumed crime fighter known as "The Dragonfly." However, standing in the way of his destiny is the villainous Lou Landers. After an experiment gone wrong, Lou develops the power to steal a person's life force and in a dastardly quest for immortality becomes the super villain, "The Hourglass." With unimaginable strength, unbelievable speed and deeply uncomfortable tights, will the Dragonfly be able to stop the sands of The Hourglass and save the world?

Now as for the acting; back whenever I hear Leslie Nielsen was in a film I would go nuts and

want to see it because after all he is the man when it comes to Parodies, well at least that’s what I use to think, back in the day when great Parodies were made, now whenever I hear his name the only thing that comes to mind is “oh boy here we go again with another bad film”, which is sad really, because I grow up seeing him as one of the greats, one of a legends when it came to acting in spoof films. Not only was his acting fantastic, but his choice in films where nothing short of outstanding, but like I said, that was then and this is now. And it’s depressing to see that his legacy will be the horrible films he is in these days, and not for what he was back in the day, his acting was somewhat okay, nothing worth seeing like before. Drake Bell was not too bad, but his acting still needs a lot of work if he ever wants to make his mark in the film industry, you could see that he was really trying his best, but his best just wasn’t good enough. Christopher McDonald was fantastic, I must say as bad a role as he was given to play ‘The Hourglass’ he still pulled it off quite nicely, it’s just sad that he’s in such horrible films like this, because he’s (in my opinion) probably one of the most talented actors in Hollywood.

Sara Paxton was okay, I like her acting in this a lot more than I did in Sydney White, which was

nothing short of a bad headache. Marion Ross was lovely on screen, even though the film wasn’t good, it was nice seeing her on the big screen again, god I remember staying up past 1 am in the morning just so I want watch two episodes of Happy Days on Nick At Night and when I saw her in this I was wowed at seeing a friendly face from my late night T.V. childhood days back from the past, even though the film sucked [Laughs]. Regina Hall was not so bad is this, she has been known as a a queen of modern day Parody films acting in all four Scary Movie films and now Superhero Movie, and as much as I think her acting stinks, I must say her short cameo in this was not so bad, Pamela Anderson makes a somewhat small cameo as the Invisible woman, which was obviously eye candy for all these teenage boys and their raging hormones, and why is it in all these Parodies now days I’m always seeing ether Pamela Anderson, Carmen Electra or Jenny McCarthy? Seriously, the first two times it was funny and pretty nice to see these fines looking women in these types of films, but to have it done in every single film? It’s getting old real fast and not even funny anymore, and I for one am getting tired of it already. And last but not least Tracy Morgan was quite funny, he’s a great comedian who always land the right jokes at the right moment, sadly enough I can’t say the same for his career, he’s acted so man horrible films I lost count, and frankly I don’t want to. If only he could start acting good comedies his career would be on the right track to greatness.

Final Say: this movie have been great and possibly even a hit, but unfortunately like all modern day films in its genre it misses, and on quite a big scale. It’s so unfortunate I had hope that it would be somewhat good but it didn’t turned out that way, perhaps one day we’ll get a great spoof film again, but until that day comes I’d recommend you stay clear from film like these, watch at your own risk!.