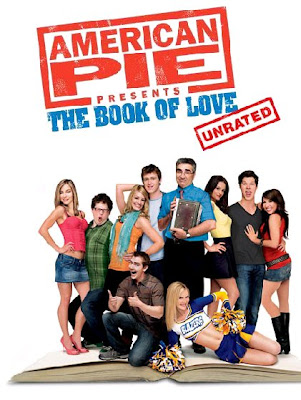 Plot: three friend who are helpless virgins: Rob (Bug Hall), Nathan (Kevin M. Horton) and Lube (Brandon Hardesty). accidentally finds the legendary "Bible" and decides to use it’s knowledge to teach them how to get laid.

The Story is about: Ten years after the first American Pie movie, three new hapless virgins discover the Bible hidden in the school library at East Great Falls High. Unfortunately for them, the book is ruined, and with incomplete advice, this leads the boys down a hilarious journey to hunt down those who wrote in the bible and repair so that they can learn it’s knowledge to lose their virginity and possibly find love in the process.

My Thoughts: Raunchy comedies have always been a guilty pleasure of mine, manly because their usually the type of film you’d never watch with another person for a number of many reason, a few of course can range from the humor being too obscene and lewd to watch with loved ones, or simply because the film is beyond the level of cheesiness for you to view with your friends without feeling like a totally A** for having such a film in your library, you know the type of film I’m talking about, too much cheese for anyone one person to handle in front of others, and believe me, we’ve all got at least one of those guilty pleasures laying around.

Which brings me to one of my all time guilty pleasures, American P

ie (1999), the franchise which has gone from being just a trilogy has turned itself into an entity quite similar to that of the National Lampoon series, and gone on to make two sequels and four direct-to-DVD spin-offs. Now I’ve argued in the past that the quality and integrity of the franchise diminished after the release of American Wedding (2003) I mean lets face it folks, the Jim and Michelle saga ended on a rather low key note compared to it’s predecessor, which made AW feel like a PG-13 romantic chick flick. Now Band Camp (2005) was a huge improvement in salvaging what respect the film series had left, but that success was unfortunately short lived when a year later American Pie Presents The Naked Mile (2006) was released, suddenly two things became very clear, 1. The writers and the studios felt that trading up decent writing and quality humor for cheep thrills was worth it if it meant more bang for their buck, and 2. Giving the viewing audience needless and uncalled for nudity was the perfect cover for the fact that the acting was a total disaster, and don’t get me started on that soft-core porn rip-off (the plot of Animal House keeps coming to mind when watching it) they called Beta House (2007), that film pretty much buried the franchise under six feet of dirt for me, and left me utterly disgusted in disappointment with the way the franchise was treated and had me hopping that this was going to be the last we’d ever see the title ‘American Pie Presents’ on the cover of a another title in the raunchy genre.

But low and behold I was mistaken, and in some strange turn of events, right for it

. I originally had no intention what-so-ever in viewing than alone reviewing American Pie Presents: The Book of Love (2009) because if I’ve learned anything it’s that you can’t teach an old dog new tricks anymore than you can turn the town slut into a saint. But don’t scratch The Book of Love off your list just yet! Despite my deep criticism towards this franchise for it’s lackluster performance in the past, it’s newest installment has in fact manage to do the unimaginable by breathing new life into a series that was once unredeemable until now. The Book of Love takes the entire franchise back to it’s original grass roots of wild teenage adolescence and raging hormones, or in other words, it’s returned back to basics, but don’t think that because it’s gone back to it’s roots doesn’t mean it’s not as raunchy enough for the times, the film still maintains a raunchy title but does so in a more tasteful manner, meaning the eye candy isn’t thrown out there on screen for no apparent reason, much like the original American Pie, The Book of Love is more character driven than it’s predecessor that mainly revolved around senseless humor and over the top nudity everywhere. This time around the film’s main plot focuses on what got the subplot to the very first American Pie film going, the legendry ‘Bible’ which has been sought after by many but only few had been chosen to learn of it’s knowledge to become the ultimate lover.

who haven’t seen the first film and don ‘t know exactly what I’m talking about, in the fist American Pie, one of the main characters inherits the bible from his older brother after expressing that he wanted to please his girlfriend in the bedroom, but little is ever explained about this mysterious book and it’s origin. In this new spin-off we learn of the origin of the elusive book and who’s it’s true creator, The story takes place at East Great Falls High, ten years after the first American Pie film, with the protagonists of the film being three hapless virgins: Rob (Bug Hall), Nathan (Kevin M. Horton) and Lube (Brandon Hardesty). After Rob accidentally sets fire to the school library he discovers the book, but sadly for him and his buddies, the book is damaged beyond repair, now it’s up to the three of them to hunt down the creator of the book and it’s contributors over the years so they can re-print it. Unlike the last film the viewers can actually relate to the atmosphere surrounding the main characters and for a change the female leads aren’t just gorgeous bodies flaunting themselves on screen with no talent to show for it. Though I greatly enjoyed the film, it doesn’t go without flaws. Despite the film having some pretty big plot holes, the major problem with the film lays in the fact that the main plot doesn’t truly pick up and take off until about the mid point of the film, making the viewer question weather or not the filmmakers couldn’t decade what the film’s main focus was going to be. On the upside I’m glad to see that the Stifler name has rightly returned to it’s roots of being the antagonist of the film and NOT the hero.

As for the acting: as standard for films like this, the acting comes off rather medio

cre as usual, but it’s a huge step up from the last film which was so terribly delivered that it wasn’t even passable for the standards of an alcoholic on his second case of beer. But in The Book of Love the acting is very much enjoyable now that it’s returned it’s focus it’s delivery the story and not bare breasts bouncing around. Bug Hall was fairly okay as the film’s lead protagonist, giving a performance that makes you feel for his character (Rob) who seems to have the worst of luck by having all of his embarrassing antics broadcasted on the internet by his younger brother, it’s nice to see such a familiar face like Hall stepping out of his innocent childhood days of acting and into something more fitting his age. Beth Behrs did fairly okay for a film like this, but I think she could have done a lot better, it’s not that she wasn’t the best she could be, but rather holding back on what could have been a fantastic performance. Kevin M. Horton was not very impressive, I mean aside from the fact his character was side tracked early on in the film to provide a bigger part for the other characters, his performance came off very un-impressive and easily forgettable.

Brandon Hardesty is not your traditional style actor, I mean let’s face it people, posting YouTube videos of yourself hardly merits being called an ‘Actor’ in my book, and though he had something going well with his character, it just seemed way too unoriginal in that seen it a million time sense, I’m also starting to get tired seeing al these web-actors popping out of the wood works thinking they can call themselves actors just because they can read lines in front of a camera (But to be fair, I can’t really judge because I’m no better, I call myself a critic just because I write a review on the internet [Laughs]). John Patrick Jordan who plays the latest member of the ever so growing Stifler family, though I appreciated the fact the Stifler name has returned to being the antagonist of the series I was not however happy with Jordan’s performance, which seems like a lousy rip-off of Seann William Scott’s performance of Steve Stifler in the first three American Pie films. Eugene Levy is a real decent actor, who’ve been quite the number of comedic hits over the years, and I respect his style as an actor, I really do, but I cannot be the only one who’s getting just a little sick and tired of him playing a character that shouldn’t even be a part of the storyline anymore, and yet here he is, playing Jim’s Dad in every damn spin-off film in the series. Melanie Papalia, Jennifer Holland and Louisa Lytton, who plays the other leading ladies of the film do fairly decent aside from looking without a doubt stunning, the only disappointment was they weren’t given a good enough development in the story for you to après heat. Aside for the rest of the cast the film is filled with a slew of well known former child stars now grown up which was amusing to see.


Final Say: After sitting with my train of thought over the film I’ve come to realize that, the Book of Love is probably the most soft-core slice of pie in the entire series, trading most of the eye candy opportunities for more comic driven set ups, thus making this film more in tune with the beginning of the series than any other film before it. Though the film has it’s rough spots and slight disappointments I still found the film to be very enjoyable and wouldn’t mind diving back into it again someday. I recommend it!

Copyright 2010 TCWreviews.com
All Rights Reserved
Posted by Clifford Kiyabu at 10:38 AM