Review: The Book of Eli (2010) [Reviewed By Clifford Kiyabu] 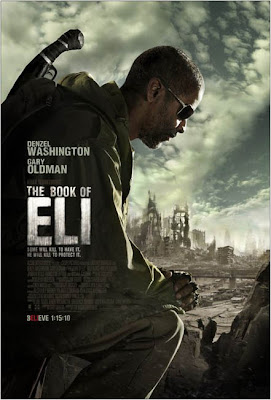 Plot: A lone hero must fight his way across the wasteland of post-apocalyptic America to protect a sacred book that holds the key to saving the future of humanity.

The Story is about: Eli (Washington) has been on a journey for 30 years, walking west across America after a cataclysmic war that turned the earth into a total wasteland. The world has become a lawless civilization where people must kill or be killed. The barren roads belong to gangs of cutthroats who rob and kill for whatever goods they find. Eli is a peaceful man who only acts in self defense, and becomes a warrior with unbelievable killing skills when he is challenged. After the war, Eli was guided by a higher power to a hidden book and given the task of protecting the book and taking it to its final destination. Eli guards the book with his life, because he knows that the book is the only hope that humanity has for its future.

My Thoughts: In our world today we take so much for granted, we waste food and water likes it’s going out of style because these necessities hold no value to many of us, or the fact that the warmth of respect and kindness seems to be demising on a rapid rate and being replace with pointless panther over who’s right and who’s wrong, everyone wants to be victor no matter the cost, it’s these very principles that push us closer than ever before to the edge of oblivion. The question is, what will become of us after the great plunge?

takes a leap of faith into the post-apocalyptic Action Sci-Fi The Book of Eli. The film focus on Washington’s character, Eli, a man who’s been walking the doomed wastelands for little over 30 years since the end of a great war the devastated the globe crushed all known sense of social governing, in his possession is the only known remaining copy of the King James Bible. He’s protecting it because he believes that God led him to discover it so that he may deliver it’s knowledge to someone who’ll preserve it for the future of mankind, but in the wake of his journey there are those trying to get their hands on it specifically to use it as a weapon. The film is an epic new take on the post-apocalyptic genre, and I must stress the word EPIC here, because the film will without a doubt blow your mind on an epic proportion, with stylish and memorizing cinematography that is visually stunning to say the least, and the score, oh how moving it is, Atticus Ross composes a score for the Book of Eli that honestly tells a story all on it‘s on within it’s notes, filled with emotionally charged sounds the score for this film is a must listen to. Now I want to fully say here and now, if you are not a person of faith I would step back from wanting to see this film, because you’ll only become filled with aggravation from watching this film, yes it’s heavily religious based, and yes the journey this film goes through is in itself a testament to Faith in a higher power, so if you don’t believe in a faith of some sort don’t waist your money by watching something that will leave you fully frustrated by the end of the film. Now if you’re a person of faith or at least open minded to a film with a faith based concept and morals, than the Book of Eli is defiantly a film that will not disappoint.

o rules to live by other than surviving, it’s ether kill or get killed, people! And the faster you learn this the better off you‘ll be. The film’s plot is defiantly not an original one I can tell you that, but what it does is show you is that; even in man’s most darkest hour hope still loves on. The film is jammed packed with pulse pounding action that is both extremely gory and stylish almost on the near level of a graphic novel. What makes it so interesting is that most of it comes to you unexpectedly and leaves you breathless. The plot in itself is like a splice between a post Apocalyptic version of the classic Clint Eastwood western ‘Unforgiven’ and Japan’s legendary film series ‘Zatoichi‘, mixing awesome martial arts and blade welding fights with classic style gun slinging action. It also works pretty well on the motion that we are giving very little information on how exactly the war started or who launched nukes onto who first, the only thing the viewer get is a mild hint at what might have caused society to go so wrong, also it doesn’t give much as to why humanity’s survivors decided to destroy all know surviving bibles, only that man blamed religion and felt if everything that made us civil was gone so should it. This of course gives the viewers and excellent sense of control that allows the individual decide what the real caused motives might have been behind the war. The movie however doesn’t go with out a few cons I might add, while I enjoyed the mass majority of the plot, I felt the story ran it’s course quite fast towards the end, almost like the ending was rushed to reach it’s ultimate message, which in turn is revealed as a final and major twist in the end, which itself is a play at having faith in a higher power to guide you through the storm of life, I strongly feel the there was more to the story that could have been told before reaching that point, like a little more back story behind our mysterious hero Eli, we know almost nothing about his life before the story take place other than the fact he’s been roaming the earth for 30 something years, thus leaving him as a 2-demantional character in the film. Other than that the film was a real pleasure to view and a worthy contender for being a top film for this year.

: Viewers are treated with nothing short of top notch performances by the whole cast here. For starters, Denzel Washington really stands out in this for giving one of the most memorable and unique of performance’s in his career. For those of you, like myself, who’ve closely watched his career over the years would notice that he’s always stuck close to playing very talkative characters, may it be any one of the many different genres he’s crossed into as an actor he’s shown that his best attributes on screen has been good looks and the ability to deliver slick smooth talking dialogue and lots of it, no matter how horrible the film may be, once you got him talking some of that dislike will just melt away. However it seems that this time around while in the role of Eli, he take a leap out of the norm and plays a character that has very little say, but much to express. Not only does this prove to be very affective on screen, but it shows that he can evolve into new roles and exciting possibilities. I’m a long time Gary Oldman fan, he simply can’t do any wrong when it comes to acting in my opinion, and in the book of eli he shows just that playing in the role of Carnegie, by proving that no matter what type of a role you put him in he’ll shine in it, though he does great playing the good guy from time to time his best has always been playing the antagonist, and it’s nice to see him return to the role of the antagonist in this, he gives the character this perfect blend of dark jaded cynicism and near psychotic greed, that he’ll do anything to get what he wants even if it means destroying everything in the process. I’ve really become impressed with the way Mila Kunis’s career has developed over the last few years, she’s gone from being just ‘That’ girl you see on the side lines to being a real heavy hitter, and does so graciously in the leading female role, and give us a little taste at the end at what a film at this magnitude would be like with her in the leading role. Ray Stevenson does a magnificent job in his performance as Redridge, because though he’s Carnegie’s second in command and most of the time just the scum of the earth, you can’t help but feel something for his character, because it’s like he does mean well most of the time, but like the main villain, he often put his own selfish greed before others. Last but certainly not least, actress Jennifer Beals does a wonderful performance in the role of Claudia had perfect chemistry alongside actress Mila Kunis playing as mother and daughter.

Final Say: The Book of Eli was a powerful and engaging film from start to finish, and makes the viewers question themselves if all this arrogance we show towards each other is worth in, when the possible outcome could one day result in something like this, it also makes you value the more simpler things in life, like food, water and the kindness and companionship towards our fellow man. It doesn’t matter if you’re a Christian or not, but a believer of faith in general or at least open minded to it, you’ll defiantly want to see The Book of Eli. I highly recommend it!

Copyright 2010 TCWreviews.com
All Rights Reserved
Posted by Clifford Kiyabu at 1:40 AM