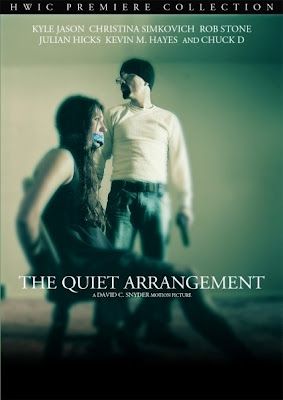 Plot: When the wife of prominent lawyer Walter Briggs is kidnapped, he decides to take matters into his own hands. But things are not really what they seem and the abduction becomes more complicated for everyone involved.

The Story is about: a group of individuals surrounding a kidnapping get more than any of them bargained for when the perfect crime get‘s complicated. One crime told from various point of views

My Thoughts: There are so many films now days where a group of misfit individuals gather together to commit the perfect crime, and it always seems like they get away with it, but in reality is there really such a thing as a flawless plan? Some will argue that with the right amount of planning and the right people with skills put together, is the perfect formula for a flawless getaway. You see it in movies, you read about in books, and you hear about ’em in stories, but what many of those movies, books, and stories don’t tell you enough is that even with the right people, the skills or the perfect amount of planning, everything can come crashing down in flames over the element human nature. You see, a person can live life on a daily routine set of rules and schedules down to the letter, some of you who read this know exactly what I’m talking about. For some, it’s something as innocently small as having their cup coffee first thing in the morning, for others, it’s checking their email religiously throughout the day, while for others their habits can be a little more edgy, but no matter how well someone thinks they have you mapped down, what they can’t anticipate out of you is the unexpected will of human nature that allows us to change our entire routine in an instant, that little marble of disaster that fate throws down onto the track and allows everything to derail.

And as the saying goes, sometimes things are as easy as pie, and

sometimes, things get complicated. And when things to get complicated the line between right and wrong become as blurred as the line between doing your job and taking your job personally. Call me a cynical man but I can’t help but feel a certain sense appeal towards the negativity of humanity, because it’s in our darkest moments where we show our true self, the unsavory side of ourselves that neither you or those around you want to see which, because it’s the side of us that shows the true nature of our inner agenda which may not always be as heroic as we lead people on to be, which proves to be one of the prime reasons I was so captivated by Writer/Director David C. Snyder’s latest film, The Quiet Arrangement, a film which projects precisely what happens when a simple plan can get very complicated very quickly, or how the most good and honest of people can wind up surprising us, and that even in the most shadiest of characters lays a shear glimmer of good. The film takes a gripping look into the lives of multiple individuals surrounding the kidnapping of a prominent criminal attorney’s wife, who just so happens to also be mixed up in dirty dealings of his own. The film follows a time period of about 72 hours showcasing the events of the kidnapping, the events before hand leading up to it, and after, taking completely from different points of views all of which gives a small puzzle piece to the whole story. What I found interesting is that each bit paints it’s own light over the situation as it slowly unveils itself, and where one story may demonize certain individuals, another will turn the tables and show a different take.

My only disappointment though, is that the film leaves a few questions un-answe

red as well as some major plot holes. I get the idea that the filmmaker probably did this intentionally as to leave a form of unsolved mystery to the story, I mean I can perfectly understand the idea of not wanting every single detail thrown to the viewer and that some things are best left to the unknown, whiter if that was the case or not I felt certain things really did need answering for closure as a viewer and weren’t. However, aside from this little upset towards the film I urge you to look past this little bump in the road, and see the memorizing thrills this film has to offer. The film’s plot is a truly thought provoking piece that will keep you guessing until the very end. Aside from what I’ve already said about the film, what I found to be one of the film’s best attributes is the grim atmospheric world that Director Snyder created around his characters, and I must stress the word atmospheric here, because it’s really captivating in that rear sense that, weather you love it or hate it you can’t deny that the film’s cinematic feel is on it’s own unique level that is nothing short of sear brilliance.

for the acting: as a critic, observation of the actor’s performance is single handedly one of the most important things in being a film critic, because a good performance can turn a bad film good, and a bad performance can turn the tides against a good film. As for as the acting goes, the performances were pretty good. Kyle Jason give an outstanding performance, through his performance he managed to pulled off being one of the most peculiar characters in the whole film, making you wonder about him in one scene and than route for him in the next. I enjoyed Kevin M. Hayes performance a great deal because his presence onscreen commanded the focus of the viewer almost entirely while onscreen, which is seen as somewhat of a rarity for most actors. Rob Stone and Julian Hicks did a fine job portraying the undercover cops in the film, their chemistry worked really well. John Delserone was great in his odd but good performance, I say odd because, well, it‘s something you just have to see for yourself to understand, but know you‘ve been warned! Christina Simkovich was very impressive, I found her acting to be very gratifying for giving the film a sense of realism, and the fact this is her first film (according to her IMDB profile) this makes it all the more impressive, because she mange to pull off a performance that was more believable as a lightweight actress than some longtime heavy hitters. The rest of they cast that I may have not mention here, did very well, if not for them this film probably wouldn’t have been as enjoyable.

Final Say: As many of you who’ve been following my critiques for some time now know, I’m a tough as knells critic who isn’t ashamed to down talk a film to it’s very filmmakers, I’ve done it before and I’ll do it again, but you also know that when I hold high praise to a film it’s out of my honest sincerity, I’m not going to blow smoke up your windpipe here; the film does have it’s faults, but to that same respect the film makes up for many of those faults in smart and cleaver storytelling that will guessing what will happen next, and for that it’s forgiven for it’s flows. I highly recommend it!

Copyright 2010 TCWreviews.com
All Rights Reserved
Posted by Clifford Kiyabu at 2:57 AM