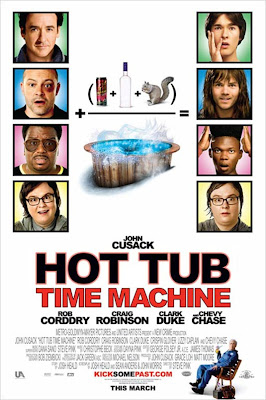 Given the name Hot Tub Time Machine, going in to the movie you know it’s going to be goofy and fun with plenty of retro vs. modern laughs. Our characters have more recent familiarity with the modern world but find themselves back in the past. Three out of the four of them are re-living the trip they had years ago. Hot Tub Time Machine is just about everything you would expect it to be given the premise. Of course you have to suspend your belief, but this isn’t really the type of movie you should be analyzing that much. A foreign energy drink spilling on an old rusted hot tub takes them back to 1986 and transforms the resort to the happening Winterfest. Sure, they could have had some elaborate scientific gadget that transported them back in time, but it’s so nonsensical and outside of the realm of possibility that something as small as a spilled energy drink seems to fit. Really this is the type of movie where you just go with the flow and see where it takes you.

Adam (Cusack) has just been left by his girlfriend who took a great deal of his belongings with her. His 20 year-old nephew, Jacob (Duke), is currently living in his basement. He spends all of his time on the computer creating a “second life” where he’s a prisoner serving his time, which he shows much more concern for than anything in his first life. Adam hasn’t been close or had much contact with his friends in awhile until he gets a call from his high school buddy, Nick (Robinson). Their friend and “asshole of the group”, Lou (Corddry), has survived a suicide attempt but is recovering in the hospital. They know his family doesn’t really like him and no one else will be there for him If they aren’t. They decide to take a trip to go to a ski resort where Nick, Adam, and Lou had some of the best times of their youth. 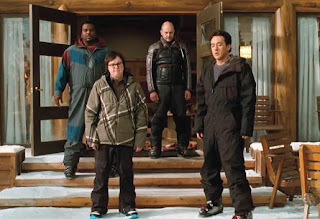 hen they get there they find it isn’t quite the same place that it used to be. It’s completely run down and the one-armed bellboy is rude and destructively throws their bags around. The place is pretty deserted and even when they find a hot tub they find a dead animal in it. Just as they get desperate to get the night going in this slump the hot tub seems to go through some transformation, bubbling and brightening. The guys jump in and begin to start the night off right. Lou’s foreign energy drink spills on the hot tub, making it static as electro bolts surge through it. The hot tub begins swirling, taking them away through a vortex. Suddenly they find themselves back in the 80s. When they look in the mirror they see the 1986 versions of themselves. They’re surrounded by leg warmers, ALF, humongous portable phones, and they even see a live broadcast by Ronald Reagan.

They are warned by a quirky repairman played by Chevy Chase that they have to do things exactly the same. They realize that since they are playing with the past they have to or it will trigger one change after the other and skew the future. This means that Adam has to break up with an incredibly attractive girlfriend who he believes was the last really good girl in his life. Lou has to repeatedly get beaten up and Jacob has to drag him away from a threesome because that’s not what happened before. Jacob flickers and fades since in this world he doesn’t or shouldn’t exist. He does run in to his young partying mother, which quickly turns his stomach. Seeing her though clues him in that it is exactly 9 months since he was born, meaning that he could have quite possibly have been conceived this weekend. 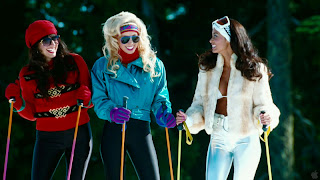 ches. If you have seen Better Off Dead you will really appreciate John Cusack here. The atmosphere really reminded me all of those 80s ski trip movies. Cusack makes a good transition in characters between the cynical and selfish, but still somewhat likable grown Adam, and the youthful Adam that he finds again when he gets caught up in the prospect of second chances. Cusack shows great energy in these moments and has a lot of charisma.

Clark Duke did pretty well as his nephew. You could make the argument that he has a flat character as he is essentially a computer/sci-fi nerd without much of a social life outside of the world of the internet. Personally, I thought his character worked pretty well. Duke added the appropriate geeky and loner aspect of the character without overdoing it and still seeming like a likeable enough guy. He does really represent our generation very well by not knowing how to connect with others when cell phones and internet aren’t even in existence yet. Duke has great reactions, as he is really the only one experiencing all of this for the first time, constantly reminding himself that all of the technology and pop culture references he has grown up with are essentially gibberish. Duke also had good comedic timing with the other characters as well, insulting others right back and actually being more witty.

Craig Robinson is hilarious throughout the movie, even adding a bit of his personal comedic flair such as including the “It must be some sort of hot tub time machine” line that he speaks directly in to the camera. The young Nick has great moments of youthful spark as well, performing 80s numbers and giving the audience a taste of the future. One of his funniest moments though is when cussing out the 9 year-old version of his wife for cheating on him in the future. Rob Corddry does well as the asshole of the group, eager to exploit the future and everything else in the process. Corddry still manages to play this without making us hate him and even adds a bit of depth in realistically to the character. Lizzy Caplan does well as the charming, interesting, and elegant April, a music journalist Adam meets who might do a lot more to change the future than his high school fling ever did. Chevy Chase also was a joy to watch, portraying the oddball repairman who seemed to have a sly nature to him. 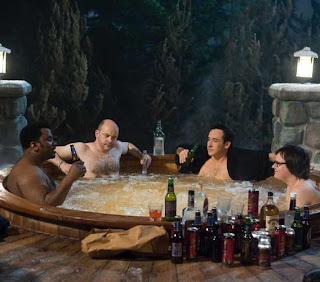 e isn’t an incredible movie and you could find holes if you really tried, but why even bother? It’s a pretty solid film for a goofy time traveling movie. All of the principle characters, particularly the main 3 characters have back stories, well-developed personalities and energy between them, and a certain amount of depth without seeming forced. The 80s energy is great and there is a lot of comedy through the past and present pop culture references. The rival pretty boys think the energy drink must be some sort of Russian bomb and since they are different and seem to have foreign unknown items they must be Russian spies. Yes, we even have the typical “king of the mountain skiers” that always served as funny rivals in 80s ski comedies. Their first clue that these guys must be up to no good is that one of them is riding some odd plank thing (a snowboard). I also liked that the film went a slightly less formulaic and more fun route with how they dealt with the butterfly effect. Instead of them having a blast just for things to slowly blow up in the face they actually try to prevent a major catastrophe from the beginning so the guys vow to do things exactly the way they did before. Of course, everything isn’t neat and perfect or we wouldn’t have much of a movie. The film plays with the idea of the inevitable and second chances, questioning how much control you have over your own successes and happiness even early on before these actions really play out.
Posted by Kelsey Zukowski at 2:48 PM