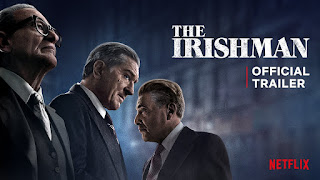 Review: Netflix’s The Irishman is a depressingly beautiful film about the hard choices we make in life. And the price we pay with those hard choices. The movie has an atmosphere about it that is both deep and impactful. It’s probably one of Scorsese’s best work in years. It also shows that Scorsese has not declined in quality as he ages, but rather improved. Some may argue and debate on who is the true antagonist of The Irishman. But the truth is, time itself is the real villain of this story, as it is in life itself. Death comes for us all sooner or later. There is no avoiding it. What The Irishman leaves us with is, the most importance is what we do with the time we are given, and how it effects those around us.

The new de-aging tech used in this film is a true marvel to behold. It most certainly will open the door for many in Hollywood continue to obtain oppatunities with age. and the acting is phenomenal and top notch. The runtime may be a bit lengthy for some to stomach. And I certainly can understand why some may find it tiring and repetitive. But with a story like this, anything below 3 hours would do the source material a great disservice. I really enjoyed every minute of The Irishman. It’s definitely worth a repeat viewing.