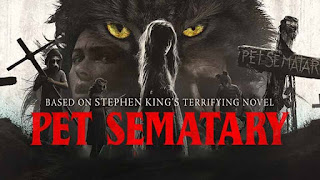 Review: From the moment I heard John Lithgow say “Sometimes death is better” in the trailer, I knew I was going to have issues with the 2019 remake. Which I found very disappointing considering it’s been 30 years since the orginal Pet Sematary was released, and was well within justification for an update. It seemed so promising with the potential of being on the same level of greatness as the IT remake. But alas, the finished product sacrificed everything that made the novel great in the name of cheap jump scares. What made the novel such a great book is that it’s more than your average run of the mill horror, it’s also a tragedy that hit’s you where it counts, and leaves you with questions of morality if put in similar circumstances. This is something lacking in the 2019 remake. It lacks the ability to invest any sort of emotional bond with it’s viewer and thus feels heartless. This, of course could not be more true than in the film’s big twist... By shifting the tragic death of Gage to Ellie, the film robs us of her grief, and how she copes with the loss of a sibling. And turns her into a genric killing machine. This leads me to the other issue. In the novel the series of tragic events is largely due to Louis’s inability to accept the finality of death, and instead continues repeating the vicious cycle out of desperation and hope things will differ this time around. Except they don’t. The story of Pet Sematary is every bit as much a tragedy as it is a horror. And yet, in the 2019 remake, we are deprived of some of the most key elements.