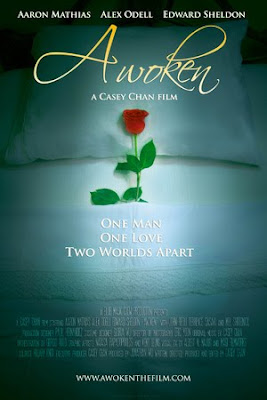 Awoken is a short film that follows a mourning husband, Owin (Mathias), who struggles with losing his wife. She’s in a coma and is now getting to the point where her body is giving up and she is slowly dying. Owin has been researching ways to communicate with coma patients while they are under; to try to reach them and guide them back. His research concludes that their brains are still functioning; they’re just living in another world rather than this one. Owin’s wife was a big believer in different realms. If she can’t come to his realm then he just might have to come to hers. With the help of another researcher who lost his wife, Dr. Albert Kane (Sheldon), he tries the impossible, unwilling to let his wife die.

The ending really frustrated me. It is extremely anti-climatic and the audience is left without ever having any type of satisfaction. Other things could have been cut down, but the essential ending is what should have been concentrated on more. We are given no clue as to what happens next in what should have been the climax. Even beyond that, what lied ahead of our character, one way or another, could have made for the most intriguing material. I’m assuming it wasn’t dealt with because they didn’t have the budget to pull off an “other realm” look, which is a shame.

At moments the film’s low budget shows. The effects are extremely cheesy and some of the acting is very over the top. Edward Sheldon was the worst case of this. His acting was atrocious, which distanced me from the film in the heavily emotional scenes he was in. It was just a reminder that none of this was real and he was simply playing a character, and a poor portrayal of one at that. Luckily, our lead, Aaron Mathias, dealt with the material far better. In fact, he’s probably the best thing this film has going for it. I believed his character and felt for him. He showed a good range and helped keep the audience involved when they might have been losing patience with the film.

Awoken is so melodramatic at times it’s hard to take it very seriously. It has an interesting enough premise, but once it finally gets to the more compelling material, it is quickly cut short. The over-the-top tone certainly doesn’t help. Aaron Mathias’ performance helps keep us there, with his character, but by the end of it, even he can’t override the lackluster content and production values.
Posted by Kelsey Zukowski at 10:04 AM