Review: Death of The Dead (2011) [Reviewed By Clifford Kiyabu] 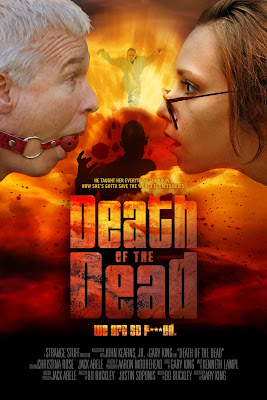 Plot: When a toxic chemical is accidentally released, a zombie outbreak plague a small town, when Wanda , a geeky young girl with her karate trainer finds out that a rival karate dojo has been infect with the virus turning them into Zombie Ninjas it’s up to Wanda and her overly perverted teacher to save the day before the infection spreads beyond containment.

The Story is about: Wanda is an uber-nerd with the coordination of a seizure victim. Her karate trainer is an aging pervert with a penchant for ball gags and various sex toys. When a bus from a rival karate school accidentally runs over a couple scientists dumping a toxic chemical down the sewer, the entire class is turned into high flying, flesh eating baddies! As they wreak havoc on the town turning others into zombie ninjas, Wanda and her instructor must save the planet with the help of a magic karate belt.

My Thoughts: A few years ago I had the pleasure of reviewing director Gary King’s début film, New York Lately (2009), from the start of the film I was instantly taken in by how wonderful his directing style was and how well he was able to captured the life and essence of the east cost lifestyle revolving around a group of individuals who‘s lives take hold of the viewer watching from star to finished. I spent the better part of writing my review for that film trying to figure out what I didn‘t like about the film, any shred of a fault would be suffice, but alas there was none great enough. His cinematography was visually captivating and I eagerly awaited to see what would he come up with next. I had heard he worked on various different projects other then his own but it was later on that I learned of a feature he was working called “Death of The Dead”, to which I found very interesting despite my not knowing much about the project other then it being a comedy of some kind (the title was also a dead giveaway to this) so without having any know-how on what to expect out of a title like that seeing that the filmmaker’s résumé paints a different story about him, one that reads “art-house” filmmaker! but I went into watching this film anyway putting aside all that I had originally thought about him and felt pretty optimistic about it too… but sadly if left me with somewhat mixed feelings with how the end result turned out.

don’t like to pride myself as a parody buff but I am a fairly decent fan of the genre, and like all good fans I enjoy seeking out a good parody film if that makes any sense, but believe me when I say that there are ways to find the perfect parody if you look hard enough, along the journey of finding perfection you will indeed frequently come across the not so desirable ones in the process, you know, the unsavory comedies you wished you hadn‘t seen or for a lack of a better word, un-see. When I watched Death of The Dead which was directed by Gary King and is written by Bo Buckley, my first reaction to witnessing the first act of the film unfold was like watching what I like to call something that somewhat resemble something in line of if Aaron Seltzer and Jason Friedberg got together to write up a script that would be directed by Lloyd Kaufman as a Troma film, then, my boy Death of The Dead would seemingly be the end result (see where I‘m going with this? Though a Kaufman film isn‘t entirely a bad thing however) but I digress, let me elaborate as to why I feel this way. For a parody such as this to work there needs to be a sense of guidelines that keeps stability for the film and to properly set the jokes up in the right motion, of course the manner in which they are executed need to be timed just right as well or else it will face the inevitable fate of falling short. It doesn’t matter how ridiculous the plot is, or how cheesy the jokes are (the 1980 classic Airplane! Was complete proof of this being so), but what is impotent is to know when to go all in on the joke, and sadly it’s the timing where this films fails short on.

en humorous, and what jokes that are delivered on key aren’t as comedic due to the joke not, as they say ‘going there’ enough, the film obviously wanted to be as explicitly raunchy as possible like any Troma themed film would want (the beginning locker room scene and the ball-nunchucks is evident of this) but didn’t quite take it all the way there, while some of the film’s aspects do in fact retain hard R rated atmospheric themes with a few decent mature attire humor and sexual themes such as adult sex toys and such featured in it, the problem with it not going there as previously mention is that if there was so much themed material featured in the film why wasn‘t some of it used at their disposal? One that easily comes to mind (Pardon my French) why wasn‘t there a dildo sword fight scene featured in it!?!?!. Because of lack of such usefulness of jokes like this makes a lot of the film come off feeling as if there was a lot being held back. leavening some of the film’s more humorous moments feeling as if it was conflicted between a age range war to gain a wider audience vs. going all out. But with that being said the film did in fact have it’s moments in which I managed to let off a chuckle here and there. There’s isn’t much of a solid plotline going for it other then a group of karate teens get infected by a zombie virus of some sort and faces off against a small town nerdy girl who’s sole purpose is to save the town and hopefully the world. Though that isn’t much to go on with you can’t really hate on it for that on the bases it’s a parody film which means a strong storyline isn’t truly warranted (though it still would have been appreciated). The upside to the film really comes at the closing moment of the film when the director himself redeems the film a little by letting the viewers know that he’s in on the joke and not to take Death of The Dead so seriously and to enjoy it for what it is and nothing else. I may not have initially liked the end product that resulted with this film but I respect the filmmaker and writer for doing this.

: Well what can I say, the acting here was not one of the film’s strong suits, usually when a film suffers from too many faults you can always breath a sigh of relief over the fact that there’s at least one good aspect, but this is not the case as it was difficult to find any good in the performance either, which is giving me more reason to believe the strong show of ‘Eye candy’ (Which is much appreciated, guys) at the film‘s beginning was placed to masked what lied ahead. Now I don’t mean to be mean here but I’ve seen a better performance deliverance in a daytime soap opera then I did with Death of The Dead which is saying a lot seeing that I don’t care for soap operas one bit. But on the Brightside it’s not all bad. The leading star Christina Rose, gave a fairly decent performance as Wanda, she played the nerdy girl part well and to a degree won me over with the expression on her face as she yanked out a pair of balls off of a Zombie in one scene in the film. Jack Abele and William Lee gave a somewhat humorous performance as the overly perverted Master Sensei and the Evil Sensei. The pair seemed to work well and would have had high praise on my part had it not been for a few bumps on the road with their performance. Sadly though the film’s bad apple falls flat on Michael Blaustein part in my opinion. I tried to like his performance in this seeing that he’s appeared in ‘New York Lately‘, which is a film I greatly enjoyed, but sadly his performance as Donnie felt too forceful and not organic enough for me to get into the character as one of the film’s main antagonists. All in all the cast proved to be disappointing with the exception of a few.

Final Say: Death of the Dead wasn’t all that it was banged up to be in the end, it had it’s moments and could have been a shining example of a great indie parody, but ended with more cons on it’s check list then pros, but in hindsight to everything I said I will say that I respect the filmmakers for at least attempting to making something that had great potential. Which at the end of the day you’ve got to give kudos for at least trying. So for that I say; Nice try guys, but better luck next time.

Copyright 2011 TCWreviews.com
All Rights Reserved
Posted by Clifford Kiyabu at 3:24 AM