Back during the 2010 comic-con director Joe Johnston promised fans that we were going to get a glimpse of America’s original super solder which hinted at the idea of a trailer by year’s end, sadly we were mistaken. But as promised folks, It’s finally here! after countless months of promises by the studios of clips of Capt in action, we’re finally graced with the first official footage of Captain America: The First Avenger, and what better time then any other then airing it during the commercial break of Super Bowl XLV! Though it’s only 30 seconds long and fans have been aching for a full trailer, the footage was more then enough to wet the whistles of some of the industry’s most loyal fans.

Sure it was very brief, but keep in mind to some of the things this 30 seconds showed; first it gave us a glimpse at what to expect out of this film, which I might had doesn’t look too shabby if I may say so, and we get to see how Chris Evans looked in action as the first Avenger himself. And as a bonus if you pause the commercial at just the right moment you’ll get to see what appears to be Hugo Weaving donning the Red Skull face which you can see for yourself by looking at the still below. So all in all it was worth the wait in my opinion. 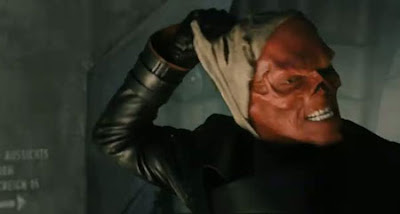 Side Note: So who’d you cheer on at this year’s Super Bowl? I myself have never been a hardcore sports fan, but I do on occasion catch a game here and there, and I have to say I wasn’t expecting the Packers to take home the trophy this year. But then again I’ve never been a stealers fan either. Here’s hoping to the Cowboys having a better shot at making it to the big game next season.
Posted by Clifford Kiyabu at 2:53 PM