SAMUEL L. JACKSON TO APPEAR IN THOR AND CAPTAIN AMERICA WITH A NEW FEMALE SIDE KICK! 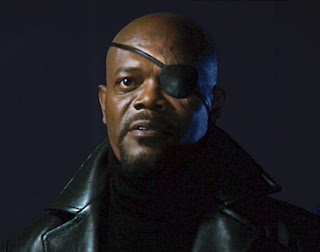 Who’s the bad mother from a another, who get’s all the bad guys and pleases all the ladies? It sure ain’t shaft, you dig? Since his appearance in 2008’s Iron Man it’s become something of a regular thing that Samuel L. “The Man” Jackson must give us a dose of awesomeness as none other then bad-ass super spy Nick Fury but fan were a little let down when they heard the S.H.E.L.D agent wasn’t going to appear in this summer’s upcoming blockbuster’s THOR and CAPTAIN AMERICA: THE FIRST AVENGER. But now that all seems to be a thing of the past since news about the actor appearing in both films will in fact happen after came from none other then the actor himself who revealed on Late Night with Jimmy Fallon that he will indeed be making cameo’s in both film’s this year.

“In the next month or so, I have to do one day on Thor, and I gotta do another day on Captain America , and in April we start The Avengers — the big deal with everybody. Thor and Captain America are pretty much done, but I haven’t done my part in them yet. I’m just connective tissue for them to join The Avengers.”

But wait, There’s more! He also stated that he will be getting a new female side kick in addiction to Scarlett Johansson reprising her role as Natasha Romanoff AKA The Black Widow and has said that he’s got to do screen testing with a number of actresses "I gotta screen test like five actresses on Friday. They have this new character that’s my sidekick or something, that’s with me all the time." While Jackson didn't exactly reveal any names as to whom these actresses are the Hollywood Reporter reported that actresses Jessica Lucas, Morena Baccarin, Mary Elizabeth Winstead and Cobie Smuthers are set to come in and try out for the yet to be named role.

Side Note: Making one of Marvel comic’s greatest iconic super spies even more bad-ass by having the role played by Samuel L. Jackson was probably the smartest and best decision Marvel has done thus far
Posted by Clifford Kiyabu at 7:31 PM