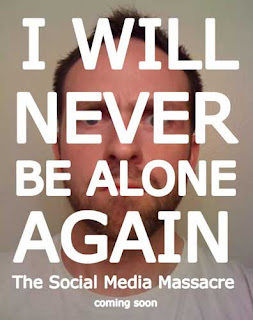 Indie web-projects have quickly become the new “in style” for getting your story told or your idea out there, and why not seeing most of these projects can be made on a micro budget and isn’t restricted by anyone on the medium, had someone say a few years ago that web-entertainment could become a real contender in the entertainment business you’d be cussed out for being a loony.

And with that being said I was greatly impressed with viewing the latest webisode of the new indie web series “The Social Media Massacre: Im Streaming Death” directed by Ron Purtee, and starring Heather Dorff and TCWreviews’ very own, Kelsey Zukowski. The web series is created by Twisted Central Productions and They Call Me Ron Productions. The story follows what can happen when bullying goes too far and things get settled live on the web!

What makes this series even more so startling and disturbing is that the concept behind it is very real and highly possible in our world today with bullying and cyber bullying being a hot topic in the news today. Heather Dorff plays a young woman named Samantha, the typical popular girl in school who wakes up tied to a chare being confounded by her assailant, Angela, played by Kelsey Zukowski, displays a heartless attitude towards her victim as she torments Samantha for her popularity and tortures and belittles her in her final moments before the highly disturbing climax ending which no doubt will have some feeling morbid over what they’ve just witnessed.

The show’s creator Ron Purtee had this to say about the project: The Social Media Massacre began with a short of the same name in late 2010, and grew into a critically acclaimed web anthology! said Purtee in a press release sent out this week. With that being said, the series has already received positive feedback by many movies sites for it’s originality and addictive story telling which is being praised for by such sites as Dread Central, Horrormovies.ca and much more.

Though I’m not the worlds biggest fan for web series, I recognizes when to dish out credit when credit is due. And I’m impressed with how this series is turning out so far and both Heather and Kelsey preformed their parts very well. I am certainly looking forward to the next episode in this new web series as it has a very intriguing premise.

To learn more about the series and view it’s latest episode visit theycallmeron.com
Posted by Clifford Kiyabu at 7:55 PM