Review: Across the Universe (2007) [Reviewed By Clifford Kiyabu] 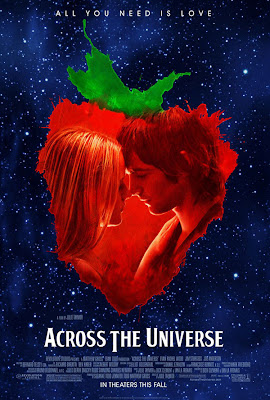 
Plot: A romantic musical told mainly through numerous Beatles songs performed by the characters. A young man from Liverpool comes to America during the Vietnam War to find his father. He winds up in Greenwich Village, where he falls in love with an American girl who has grown up sheltered in the suburbs. Together they experience the sweeping changes of America in the late 60's.

generation who was fed up with the way their country was being run, because of how the people weren’t being heard, it was a time of opening doors to new frontiers, and the film Across the Universe is a marvelous musicale that pays homage to the Vietnam-war era through the music of The Beatles, and fantastically done if I may say so, and remember I the same guy who doesn’t like musicales okay, so that should show you that if I liked it and it being a musicale than it most be good to some degree, so what I find to be most unique and loved about this film is the fact that most musicale are made as a story first with the music written in later, but this movie is a series of astounding songs that when combined with an amazing screenplay is turned into a psychedelic experience, that will have you flying in it’s wonder drug for hours long after the movie is over, also I love how the music in the film tells the story, rather than the story telling the music like so many other musicale in the pass that has done so, and I will admit that I didn’t think it was going to be a great film, maybe an okay movie at the most, but not the powerful masterpiece that it turned out to be, I was shocked and awed at this movie, because it takes the greatest songs by the greatest band of the planet and makes something on an entirely new level of greatness that will be remembered for many years to come.

Now I will say that this movie isn’t for everyone, it’s more like a Love it or Hate it type of film, so

before just running out to the nearest best buy or wherever else you go be sure to look up info on the film first, because the last thing I want is people saying I lied it sucked. [Laughs] so what I loved was the film takes you back to a more innocent time and does so in it’s own authentic way through it’s expressing the hurt young people where feeling during this hard time of war, I also loved the way the movie equally tells the different problems of these individuals like in the closet homosexuality, anti war protesting, trying to survive in a war you never wanted to be a part of, falling out of love, and trying to make dissections between love or fame. Things that people today are still dealing with are presented in such a beautiful way in this film which I normally would say wont work for a two hours and eleven minute film, but in this case it did and in such a way that emotionally moved me, now I’m not saying that all these thing conquer the over all love story between Jude and Lucy, no it in fact helps it bridge the gaps between and makes it all the more magical, I also loved the cameos by Joe Cocker, Bono, Eddie Izzard, and Salma Hayek, oh and all you Salma Hayek lovers out there let me point out that there is this particular song number in the film where Joe Anderson’s character Max is in the hospital and being taken cared by almost a dozen Salma Hayeks in skimpy nurse outfits, yes you read it right I said almost a dozen, have you ever thought you ever see almost a dozen Salma Hayeks at once? No? well just thought I should let you all know in case you might want to check that out, and I can tell you now by the end of this film you will feel a little different from before watching it.

The story is about a young man name, Jude (Sturgess) who lived in Liverpool England his hole

life with just his mother and is a dock worker always who always dreamed of one day finding his father and when he gets lucky he decides to jump ship in America to find his father, but to his discovery he learns that his father isn’t everything he thought he’d be, now with nothing to do he befriends a young collage student named, Max Carrigan (Anderson) and his sister Lucy Carrigan (Wood) together Jude and Max travel to New York and live together in a shared apartment with Sadie (Fuchs) a rocking singer, alone with the arrival of Lucy comes new found friends JoJo (Luther) and Prudence (Carpio) the five of them embark of a wonderful adventure of new friendships new experiences new loves and all the hardships that come along with it.

As for the acting; it was simple magnificent, Jim Sturgess was dead on for the part of Jude giving

the character great emotional power that matches both his voice and the songs he sings, make simpler he was quite stunning, as for Evan Rachel Wood she was remarkable in the role of Lucy, I first seen her on camera in one 2003’s most controversial films “Thirteen” and than again in in yet another risky role in “Down in the Valley” which was also fantastic and just when I thought she couldn’t be any greater she goes and does “King of California” and now I was blowned away with her magnificent performance in this film, now I can’t wait to see what she makes next. As for Joe Anderson this is the first film I have seen him in and I liked his performance a lot, I’ll sure be looking forward to his work in the near further, Dana Fuchs was quite nice in this though her acting was a off key her wonderful voice however made up for it, Martin Luther also did a quite impressive performance for a newcomer in the movie industry, T.V. Carpio did a pretty good job in both acting and in singing, lastly I also like say that actors Dylan Baker, Robert Clohessy, Linda Emond, Joe Cocker, Bono, Salma Hayek, and Eddie Izzard, all do wonderful jobs and even though they have small roles init they manage making this film just a little more special.

Final Say: This is probably one the best musicals I have ever seen in my life and as I‘ve told you before I don‘t like musicals so for me this was really something, I put this right next to The Sound Of Music in my book. I highly recommend it.

Copyright 2008 TCWreviews.com
All Rights Reserved
Posted by Clifford Kiyabu at 6:19 AM