Review: The Assassination of Jesse James by the Coward Robert Ford (2007) [Reviewed By Clifford Kiyabu] 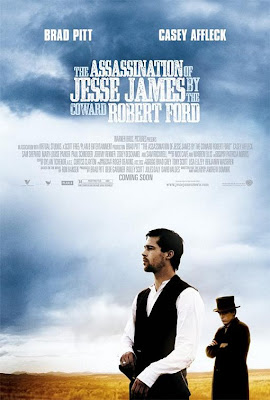 Plot: Robert Ford, who's idolized Jesse James since childhood, tries hard to join the reforming gang of the Missouri outlaw, but gradually becomes resentful of the bandit leader.
Review: 9/10

My Thoughts: Jesse James, one of the most famous American outlaws is history, to some he was a cold

hearted thieving killer, but to others he was known as a modern day robin hood of his time who stole from the rich and did good by is common man and was cowardly assassination by the hand of Robert Ford, but what about the man who killed him? Little is really known to public about him, other than the fact he killed a legend in the most cowardliness of way is the only thing we really remember or at least want to. The Assassination of Jesse James by the Coward Robert Ford takes a deep look into the man behind the gun, and shows us what kind of man Robert Ford really was, how he wanted to be a somebody in life, and respected by the James Younger gang, and his deep obsession of Jesse James that would soon become bitter resentment and eventually doing something he never thought he would ever do, but to say that would be getting ahead of myself.

The movie is emotionally charged, both Jesse James (Pitt) and his killer Robert Ford (Affleck)

are so nicely done portrayed in this that it will make your heart go out to them, and even make you feel a little uneasy at times when you shouldn’t, but strongly enough it works brilliantly, for one thing the film takes off seven months before Jesse James is killed during their last ride as the James Younger Gang and showing Robert Ford first meeting Jesse and befriending him, but it also shows that not long after the gang splits Jesse falls into a deep frame of depression while also suffering from insomnia which slowly puts him into a state of paranoia with unpredictable mood swings, one minute he’s having a good old laugh with you and the other he’s got a knife to you’re throat, while it also shows how a young and bright man like Robert Ford so greatly wanting to be like his idle he ended up killing for it, but with such things also comes regret and for him regret would be something he’d live with for the rest of his life, or at least until his very own assignation of course, which he is forever remembered in history as a coward, this is clearly a message to how the news media spins the evince around to the public by making a simple outlaw a bright and pure hero which he will live on as a legend, and a good man who regrets what he did remembered as a shameful coward,

ultimately it’s the antidote or the answer if you will to what comes to all cowboys after they ride into that big sunset, which is a sad story with a statement saying no happy ending to those who are remember, because after all would we even want to remember someone in history who had a happy ending? The answer is no, because none wants (Or at least admit it) to see others have a happy ending, and yet when you look at these sad stories of tragedy and unfortunate lose, it is also beautifully poetic in a way, I also must add that the cinematography was magnificent beautiful, well done if you ask me, and the score which I will say is greatly moving, it matches the film dead on with the same amount of power that equals to the films plot and performance, overall it is truly remarkable score that goes great with a remarkable film.

The story is about a young nineteen year old skittish man named Robert Ford who aims to be great, and during the last train robbery by none other than the James Younger Gang lead by Jesse and Frank James, Robert befriends Jesse and rides with his gang in hopes that he’ll gain fame, and after the last job the gang permanently disband, but soon after Jesse reforms a new gang with Robert and his brother Charley Ford, but as time goes by and Jesse showing signs of becoming somewhat violently unpredictable, Robert soon realizes he will never be nothing more than a lackey, or a joke to that of the great Jesse James, and what once was a harmless obsession, now is a bitterness that runs deep, and if he can’t get fame through being by Jesse side, he’ll kill for it.

Now as for the acting, I most say that Casey Affleck was fantastic as Robert Ford, making his

character someone who is quite uneasy to watch and sometimes shy, plus I was shocked when I saw his performance because he has always stayed in the shadows of other actors in pretty much every film he’s been in, but he sure made a believer out of me while watching this, showing he has the determination, the skill, and most of all the heart to be Oscar worthy. As for Brad Pitt, the man can do no wrong, it seems that as an actor is somewhat like a fine wine who’s quality only gets better with age. As for actor Sam Shepard though his role in this film is incredibly short, he still pulled of a fantastic performance, and Paul Schneider, Garret Dillahunt, Sam Rockwell, Mary-Louise Parker just to name a few, all do great jobs in making this film wonderful, but to say only them made this film great would be an understatement, as the hole cast was truly a perfect cast down to the last man and woman.

Final Say: I really enjoyed watching this film much much more than I expected, but I most warn you that this movie is not for everyone, You ether really love it or really hate it, but I personally loved it greatly and I highly recommend it.
Copyright 2008 TCWreviews.com
All Rights Reserved
Posted by Clifford Kiyabu at 3:45 AM