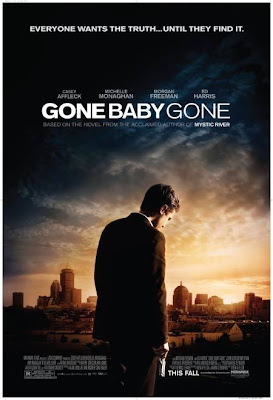 Plot: Two young private detectives are hired to take a closer look at the mysterious disappearance of a little girl and soon discover that nothing is what it seems. Ultimately, they will have to risk everything -- their relationship, their sanity, and even their lives -- to find a little girl-lost.

My Thoughts: When ever I hear the name Ben Affleck. I tend to feel like I’m going to be sick, why you may ask? because as an actor he is horrible, just

horrible and everything he‘s done in his career (including Jennifer Lopez) has been one mistake after another, so when I heard about a little known film called ”Gone Baby Gone” I thought oh no hear comes another piece of garbage from a man who doesn’t relies nobody thinks he’s good, but than I heard he wasn’t even starring init but directing with his brother Casey Affleck starring in it so I thought hey this could be interesting, I mean after all Casey hasn‘t disappointed me yet. But after about the first five minutes into the film all the harsh feeling I ever had towards Ben just suddenly melted away, if a single moment

can change ones prospective towards one individual, than this was my moment towards actor, or should I say director Ben Affleck, I can see that this movie was filmed with the utmost care, with an almost flawless screenplay which was written by Ben Affleck and his good friend and screenwriter Aaron Stockard, the movie is a high tension adrenaline rush that takes you on a rollercoaster ride of twists and turns that never let up not to the very end, I will say that the film is not your typical everyday run of the mill cop drama, it‘s dark it‘s gritty, and it’s not afraid to tell it like it is even though you may not want to hear it, it also shows you the hard risks some individuals must take to ensure the safety of others, the story alone is emotionally nerve racking and will have you at the edge of your seat the hole way, and will question your morals in life and ask you; if you had the opportunity to kill a bad person knowing that this world would be one less scumbag living init, would you do it? Or better yet, would you be willing to do something wrong knowing it is right?

Hollywood machine that only pumps out popcorn flicks for a buck year in year out, but no by casting every part for no names made this great on a magical and person level for both the filmmakers and the moviegoers, not to mention unlike most movies this one takes a more down to earth take with it’s setting, showing you the people of Boston and the streets they walk and the places they live, showing you both the good and the bad, which is more to real life than any other film I’ve seen in a long time, also I loved the cinematography, it was wonderful, simply wonderful, it gives the film this feeling that made it felt real like this really happened and that this wasn’t a movie but we ourselves were voyeurs looking into a real life situation going down, and I promise you’ll have this film still in your mind days after watching it with the constant thought of what if, and what would you have done in the same situation as the characters were put into, and I guarantee you’ll keep re-playing it around and around in your head about it trying to think what would you have done and ultimately you’ll conclude that the answers will always fall into a gray area, also one of the most important things I loved was the score which is done by Harry Gregson-Williams, it is extremely powerful while at the same time remaining humble, I tell you as I write this I am listening to it and never have I been so inspired by a soundtrack since the Crash soundtrack by Mark Isham.

The story is about during the hype of a child kidnapping, a Boston area privet detective named, Patrick Kenzie (Affleck) is hired by the family of the kidnapped child to assist the police in their investigation because he knows the tough neighborhood and the right people who might know who took the kid, but the more and more he looks into it the more he is finding it hard to find this child and he is put in a moral dilemma that is tearing him apart.

As for the acting; Casey Affleck is downright terrific, first he did a fantastic performance as

Robert Ford in The Assassination of Jesse James by the Coward Robert Ford and now he does it yet again in Gone Baby Gone, I honestly can say I’m starting to see a pattern here, one I hope he sticks too, Michelle Monaghan’s performance was as stunning as she is beautiful, her performance played out quite perfectly, Morgan Freeman as always does a magnificent pro performance, I swear the man has not disappointed me in any of the films he’s ever acted in, Ed Harris was fantastic, his performance was sinister, and yet touching, it was also nice to see John Ashton acting in this because the last time he was in something I can remember worth watching was the Beverly Hills Cop films so it was nice seeing him do something worth watching for a change, Amy Ryan did an outstanding performance which I agree is very much disserving of the Oscar nomination she has gotten for her role in this film.

Final Say: Gone Baby Gone was truly a worth watching film and I was greatly disappointed to find out the Oscars skipped it for the best picture nomination this year because it deserves it. I highly recommend it.

Copyright 2008 TCWreviews.com
All Rights Reserved
Posted by Clifford Kiyabu at 3:47 AM