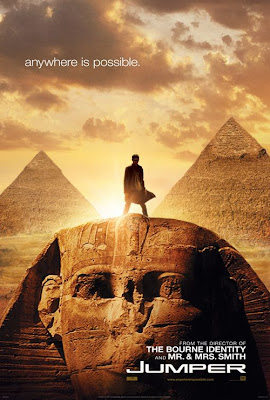 Plot: A genetic anomaly allows a young man to teleport himself anywhere. He discovers this gift has existed for centuries and finds himself in a war that has been raging for thousands of years between "Jumpers" and those who have sworn to kill them.

My Thoughts: If you could go anywhere you wanted in the world at the speed of thought, where would you go? Or better yet what would you do with

your gift? These are the things that is broth froth in Jumper the movie it’s self is a bit of a mixed bag for me, I’m not saying it’s bad, but I’m not saying it’s good ether, just a mix bag, you see visually it is a spectacle wonder for the all seeing eyes and of course the idea of being able go from one place to the other just by thinking it is down right magnificent, but there is some problems with what director Doug Liman the man who brought us such hits like Swingers, The Bourne Identity and even 2005’s smash hit Mr. & Mrs. Smith. So you’d think with a track record like this he could go no where but up, but what I saw was somewhat of a downgrade from that of his previous works, now again I say this is in no way a bad movie, just not what I hoped it would be, I felt the films origins was rather rushed when there was so much yet to be explored like how are the “Jumpers” capable of teleportation, or how did the paladins learn of people with such gifts and why are they damned in the name of god, you see all of this is left out which should have if not all explained, at least a little.

For starters, we could always learn more in Jumper 2 (If there ever is one) which I do hope 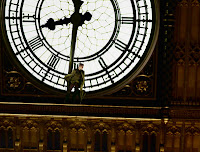 there is they do a great deal explaining to do, also there was a bit of holes here and there, like for example; who runs the paladins? Are they still under the command of the Roman Catholic Church? or have they gone rouge and if so who is giving them the orders to continue the killings of such people with special abilities? It’s certainly not Roland (Jackson) he is just a high-ranking commander among the foot solders which was unofficially confirmed in the film itself which obviously means there is a big boss or bosses out there, and yet we don’t see nor even hear of the slightest hint, which if they do make a part two like how it looks like they are trying to do than they better make sense of all this if they do make a sequel.

Another problem I had with the film was the narration at the beginning of the film done by Hayden Christensen, why? Because he lacks the proper vocal capacity to do such of a thing like

narrating, it would have been better suiting if someone like Morgan Freeman or even James Earl Jones was the narrator because both of them have a strong and powerful voice that has the ability to move someone in almost any film. But than again having someone like James Earl Jones doing the narration would be a bad idea now that I think of it, why? Well because this movie already stars two Star Wars actors init, and putting another in there would only further the idea that the filmmakers are trying to pay homage to the Star Wars films or something through this film, also I thought there was way to little development for the villains, see what most of these filmmakers like Mr. Liman don’t understand is in this day and age people don’t care about the hero of the story but the villain, I mean yeah sure we all know the villain loses in the end but it’s the bad guy that attracts us to the film because the bad guy goes where we cannot or do the things we only dreamed of doing, so when you look at it most people (I included of course) identify with the wrongdoer more than the do-gooder, so if they are to make a sequel I very much would like to see more on the villains behalf.

experiences as a boy, and just moments before he is about to drowns he somehow is teleported into a library away from harm now learning of his new found ability he runs away leaven behind his dad his friends and his long time crush, Millie (Bilson), far from home to start new life with his ability as a bank robber, now fast forward eight years to the present day he is now a young adult with a big penthouse in New York with all the money he could ever want, any woman he’s ever desired and go where ever he wishes at just a thought, but his perfect world soon comes crashing down around him when a man named, Roland (Jackson) tries to kill him, now he comes to realizes that he is not the only Jumper, and that his has stumbled into a holy war that has been going on for centuries, and everyone he’s ever known may very well be in danger including those he left behind.

As for acting, I have been in a debate with a few people over the last day or so about rather or not Hayden Christensen’s acting is somewhat reasonable or not, and in my opinion he isn’t bad

but he’s definitely not good ether, some have debated with me that watching a fly fake an orgasm would be somewhat more believable than Hayden Christensen’s acting, seriously though he has got to do better, and it can‘t be blamed on his young age because I have seen much younger and newer stars come to the big screen with better quality in acting (and much less or some even no experience) than what he brings to the table, Now I’m not saying I dislike the guy, no far from it, I think he’s a pretty cool dude, just not cool in the acting department and trust me when I say I have seen a lot of bad performances and his is nearing to be among them if he doesn‘t do something soon, furthermore I would strongly advise Mr. Christensen that he go back to whichever acting school he attended and get more proper acting lessons or at least ask for his money back, because it’s pretty obvious that he did not get his moneys worth,

As Rachel Bilson I honestly have no idea what her part was even in this movie for, other than 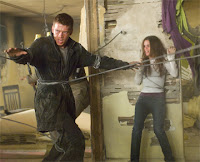 showing us a little soft-core T&A there was nothing to her character at all, in fact I found every minute she was on camera was a minute wasted when it could have been used to better the plot and the development of the main characters, as for Diane Lane her role was a tad to small to even be called a role, I mean it’s not a cameo, but it’s not a role ether her role should have been worked on more than just four minutes of screen time because that is just an embarrassment for a talented actress such as herself, also Jamie Bell did a nice job in his performance, but lust like Diane Lane his screen time is rather short, especially for someone his has been equally advertised in all the commercials along side Hayden Christensen, and yet he has such a small role which is greatly misleading from that of the ads. Also Michael Rooker did an okay performance, but I’m going to be honest with you here I felt his character didn‘t need all the screen time he was given, and of course last but defiantly not least the man himself, Samuel L. Jackson who was a downright bad motherfucker as the villain (when isn‘t he fantastic) as usual he manages to pull of another stunning performance as the bad but yet cool villain in this movie and can honestly say it was his performance and his alone made this all the more worth wild to watch.

Final Say: Like I’ve said this in no way a bad movie, but it’s not entirely a good one ether because for every good thing there was a bad, I wont recommend this to watch in theaters, but I will however recommend it to see on DVD when it does come out.