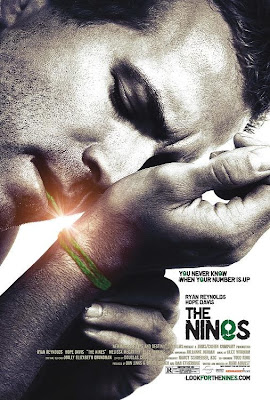 Plot: A troubled actor, a television show runner, and an acclaimed videogame designer find their lives intertwining in mysterious and unsettling ways.


My Thoughts: So the other night I had the pleasure of watching The Nines, and I must say I was

greatly impressed with what I saw, first off let me say I knew nothing about the film other than funny man Ryan Reynolds stared in it, so my expectations wasn’t too high as I had assumed this was yet another comedy with little or no intelligence, as most of you know Reynolds is not known for serious roles so I did think it to be anything special, but what I saw just blow me away and had me warped into the movie 100%. What got me so into it was the complexity of the film, and how it keeps you guessing until the very end as well as giving you a little puzzle piece to the overall big picture little by little and also the direction the movie takes the viewer, for one thing the movie is made up on three short stories involving the same cast playing different roles, which are much different from the last one while at the same time connected to each other as a bigger story.

bizarre and strange things are happening to these people and it is all surrounded around the number nine, the question here is what does it mean, and what does it have to do with them, the answer however is not in the story, but behind it, hidden from the viewing eye and you most pay close attention in between the lines to fully understand what is really amiss. also each of the three stories have a significantly different feel and style in it’s cinematography, like for example; the first story has a bright and vibrantly colorful feel to it that seems like you’re watching a nice and easy going film, but as the story continues you slowly see that this is no where near as the happy go lucky film, in fact it will give some light chills and thrills along the way that will ultimately be the set up for you to be sucked into the rest of the story, now the second story has a much different take from the first one with the exact same cast and even a some very similar settings from the last story but the cast now playing different people with a different storyline, and the feel and style to it is in a reality style with some of the cast actually playing their real selves, and again the story gives yet another puzzle piece to the story, than finally the third act comes into play now with a darker and very grim look to it, here is where the viewer will see the story’s final puzzle unveiled which will ultimately conclude to it’s reveling the true answer behind the mystery that is the nines.

The first is about three short stories, first being about a young actor named, Gary (Reynolds)

after braking up with his girlfriend and accidentally burning down his own house due to being high at the time, his publicist, Margaret (McCarthy) manages to have all charges dropped under the condition he is put under house arrest in the home of one of her clients, while away for six weeks. While he’s there he encounters strange noises at night and odd phone calls and a next door neighbor that might be a little too friendly, but most of all is everything he encounters around him seems to be connected to the nines, the second story is about a screenwriter named, Gavin (Reynolds) who is being taped for a reality TV show of him working on his new show while he is away from his home for six weeks while trying to get his new show off the ground, he cast longtime friend actress Melissa McCarthy (Herself ) for the lead role, only problem is every turn he make something bad keeps happening and more and more his new show is starting to show signs of never getting off the ground, the third story is about a videogame designer named, Gabriel (Reynolds) who is camping out with his wife, Mary (McCarthy) and daughter, Noelle (Fanning) after camping trip is coming to it’s end and it’s time to back it all up they realize that their care battery is dead and they need help. While trying to hitchhike his way back to the nearest town to get some help, but be doing so he encounters some problems that may very well be the end of the world around him.

As for the acting; well like I’ve said earlier Ryan Reynolds is not an actor I take seriously, manly

because as an actor he sticks to the same kind of movies with roles that are way to similar (Van Wilder, Waiting, Just Friends) even his role in ”Blade: Trinity” was somewhat comedic, however I will say that his roles in The “Amityville Horror” and “Smokin' Aces” was fantastic even though I didn’t care for the films all that much, but when you look at his track record you’ll see more comedic roles than serious ones so I thought oh this is going to be just another one of those films where he just acts funny the hole time, but wow, he manages to pull off doing this complex film with fantastic performance, not to mention he acts in each of the three roles significantly from each other, which showed that there’s hope for Mr. Reynolds yet, as for Melissa McCarthy well I can honestly say she did great, she a magnificent actress that is never appreciated manly because of her weight. See for some reason in today’s time that it’s cool to be thin, and un-cool to be on the heavy side, well the thing I mostly respect about Melissa McCarthy is the fact she doesn’t care what other people think about her being overweight, plus if you’ve seen her in “Gilmore Girls” you’ll know she’s great, and also little Elle Fanning was great, I can see she is fallowing in her sister’s (Dakota Fanning) footsteps, who knows she might just become the next big child star, she sure has the talent, and last but not least, actress Hope Davis was magnificent, she pulled off doing all three of her roles fantastically, I loved her acting in this as much as I love her in “American Splendor” and now this.

Final Say: I really enjoyed this movie, which was essentially something I was not expecting, though I will say however that The Nines is not for everyone as some will like it and others will, you get the picture right?, Love it or Hate it I highly recommend it.