Review: The Brave One (2007) [ReviewReviewed By Kelsey Zukowski] 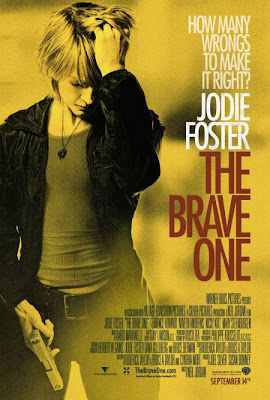 The Brave One
Review By: Kelsey Zukowski
Starring: Jodie Foster, Terrance Howard
Directed By: Neil Jordan
Written By: Roderick Taylor, Bruce A. Taylor
Released: 2007
Grade: B+
The Brave One is a very effective revenge film that doesn’t stick to the norms of the genre. It actually started out as more of a genre film just with a female vigilante rather than the typical male role. Other changes were than made to make this a battle of body and mind. It shows us that revenge doesn’t always have to be directed at one person, it can be towards violence in general. However, when you fight violence with violence you may not like the person you become; the person you are stuck with.

Erica Bain (Foster) is a radio broadcasting on a talk radio show. She is happily anticipating the wedding she is planning with her fiancé. One day they are taking their dog for a walk. The dog runs off and they aren’t the first ones to find it. A group of guys have the dog in custody, taunting it in front of Erica. They are trying to get some money out of the situation, which just leads to further trouble. These strangers attack them until Erica is blacked out. She goes in to a coma and she doesn’t wake up until 3 weeks later. It was assumed that she wasn’t going to come back in to conscious. Erica wakes up to find out that her fiancé didn’t survive, he was beaten to death.
Erica completely breaks done from hearing this news and she is only left with th

e horrible memories of that attack. The fear, hate, and rage is overloading and she simply can’t handle it anymore. Erica attempts to buy a gun, but needs a license in order to and wouldn’t be able to get it for 30 days anyway. She doubts that she will be alive in 30 days without protection. So she buys one illegally and it isn’t long before she uses it. Erica finds herself at a convenient store robbery. She is spotted and shoots the thief. She than flees the scene scared from what she has just done. Erica begins finding herself in a number of situations like this. She kills two men on a subway who stole a boy’s iPod and threatened her as well as a pervert who had “collected” prostitutes. He had one girl locked in his car for nearly a week and attempted to make Erica a part of this collection as well. Detective Mercer (Howard) finds connections between all of these murders. He is sure the same person is responsible for all of them. When he sees Erica near one of the crime scenes, she says this is because she was looking for an interview for her show. They have the interview and they end up becoming friends. Mercer begins to suspect that Erica might be hiding something and possibly that she is the murderer he is looking for. This becomes even more clear when she kills a murderous man who Mercer was trying convict but was helpless in the situation.
Jodie Foster becomes Erica Bain. She does a wonderful job and makes the movie about more than the violence. It becomes about the inner struggle that she just can’t overcome. Terrance Howard was terrific in the supporting role of Detective Mercer. Howard has given many excellent performances. He goes for movies that mean something and that stick with you. The Brave One is no exception for that. There was something very genuine about his character and performance. Just watching him engaged you so much. Between him and the crazy cycle and uncontrollable violence that Erica was going through, it was really hard to look away.
The Brave One is about fear and what it can do to you. It only takes one terrifying experience, violence exhibited towards you to change your life forever. Erica just wants to feel safe, but it takes very severe measures to get to that safety. From the moment she buys the gun, hope of getting back to normal is gone. She gives that life up. Having that gun gives her a sense of power, something that she wished she had the day of the attack. Erica really doesn’t feel like she has control over her life now. No matter what, her boyfriend is gone forever and he is never coming back. Her dog was kidnapped and she has become a much darker individual. Erica is a very intelligent person. Her voice is heard on the radio, absent of her body. She floats around the city killing others like a wronged ghost haunting those who wreck its’ peace. She still has that intelligence but no matter what she tells herself, her hurt is too strong. Killing becomes a reflex that is triggered over and over again. She knows what she is doing is wrong, but it is something that is stronger than her. Erica wants revenge but not just on those who have harmed her. She wants revenge on all of those causing harm or committing crimes. Erica has the chance to lock up her attacker, but she doesn’t. Being put in jail isn’t enough for her. She wants them to feel what she felt, she wants to take their life herself.
Towards the be

ginning of the film, New York City, where the film takes place, is shown much more positively. Erica used to love the city, but as she sees all of the wrongs that are happening, she has only fear and hatred for it. There is questioning of the vigilante role as well. Is it simply wrong or does it have some justice in it? Everyone who Erica kills is a violent person harming others’ lives. She feeds on stopping them. Yet not even she can ignore the fact that she is becoming that person she hates so much. This is a person she can never escape. None of her victims were in the right and in most cases she was defending herself. However, she could have just as easily defended herself by showing she had a gun. For all she knows, those people may have been in horrid experience just like she was that turned them to crime. The Brave One shows us that you might not know yourself as well as you think you do. Everyone is capable of terrible things. There are also questions of whether loyalty or duty is more important. Mercer wants to be the best cop he can be, but he wonders if he could turn in someone who was a true friend. When it boils down to it, he sacrifices himself in order to give Erica a piece of mind.
Posted by Kelsey Zukowski at 9:18 PM