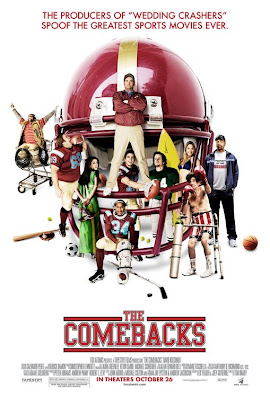 Plot: This spoof comedy follows an out-of-luck coach, Lambeau Fields, who takes a rag-tag bunch of college misfits and drives them towards the football championships. In the process, this life-long loser discovers that he is a winner after all by redeeming himself, saving his relationship with his family and friends, and finding that there is indeed, no "I" in "team"!


My Thoughts: There once was a time when the word “parody” meant something in movies, this

was undoubtedly the golden age for spoof comedies known as the 70’s and 80’s. this golden age was made up on films that spoofed other films as well as actual evince and made it work in a very tasteful and some times no so tasteful manner, but all in all it worked fine and made people all around laugh, but than the dawn of the 90’s began and there showed signs of a Genre that was without a doubt slowly dying, films that had more jokes having misses than hits and spoofing that was so idiotic that it made you if anything laugh at it than with it, and of course the new millennium hit and it seems the Genre is now almost completely dead, and yet the same filmmakers who killing this Genre continues to make sad and hopeless attempt after another trying to bring it back to life but by doing this only puts it further into the grave that they have made for it, thinking that if they keep trying eventually it will bounce back, but what they don’t understand is it won’t, it won’t bounce back it’ll just fade away.

The comebacks like other films before it failed horribly to this 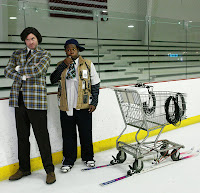 already dying Genre by trying to hard to be funny than actually being funny, and what I mean by that is back in the day of great parodies a movie didn’t have to be literal when spoofing another film, just hinting it here and there which the audience caught on to no doubt, and if they didn’t they would eventually. But no in today’s film much like this one they overly go into detail in spoofing that the joke is killed by it and what could have been a great laugh ends up being something too embarrassing to look at, like for example; in the movie during the sports montages we see the main character Coach Fields (David Koechner) spoof Kurt Russell’s character from Miracle by wearing the same outfit as he did and even have the same hairdo, than they spoofed the movie Dodgeball when they show him teaching the football team how to dodge a tackle, by this time the character went through a complete transformation from having no hair to having a great hairdo, to having long hair and a light beard and suddenly being in a wheelchair and telling the team if they can dodge a wrench they can dodge a tackle, which is so obviously spoofing Rip Torn’s character, Patches O'Houlihan from Dodgeball.

without them having to scream it out to me without making it so damn obvious and ridiculously stupid, plus they could have had all these jokes left in and still made it a good movie, all they would have had to do was make other people play the spoofed roles than the same damn actor for Pete’s sake, also the plot seems to center around the coach and his family, however there are so many other things going on in this movie that it takes the viewer continuously away from the main plot, overall it was just downright embarrassing to keep my eyes on the screen the hole time, I mean I even feel embarrassed to dedicate this much amount of my time and life on a movie this bad.

The story is about coach, Lambeau Fields (Koechner) a man who has never won at anything in his life, and after coaching every sport you can think of he give up all sports and works an honest job as a horse massager (He jerks horses off for a living), until one day he old buddy Freddie Wiseman (Weathers) tells him about a collage football team called The Comebacks is looking for a new coach, and that this might be his last first chance at winning, now he must whip these players up and make them the best team in the deviation.

As for the acting, well much like the movie itself I was greatly

disappointed with actor David Koechner, I mean after seeing him in such hilarious films like Talladega Nights which was why funnier than this, or his small role in Anchorman and also his cameo in The 40 Year Old Virgin was all fantastic, so you’d think with a career background like that he’d do great being in the lead, right? Wrong! I now know he needs more experience playing side roles before given the solo lead again, I was also disappointed with actor Carl Weathers, for those of you who are too young to remember him, he played as Apollo Creed in Rocky, Rocky II, Rocky III, and Rocky IV, and than he blow our mind away when he co-stared in Predator, you’d think he can’t do any wrong, but than I saw this horrible film and seen he can. Talk about a career taking a turn for the worst, as for the rest of the cast, well there isn’t anything really to say here as it is made up on B-list and C-list actors and actresses, and plus I don’t desire to waste anymore of your time reading my rant on this movies, so I’ll end it with my finale say.

Final Say: The Comebacks is yet another film that falls into the what could have been category, however though I disliked it I will admit it had it’s moments, but other than that all it is, is an hour half of moments with no intelligence that had me feeling as if I lose some mine in the process. So I do not recommend it, but if you still plan to see it than all I can say is watch at your own risk.

Copyright 2008 TCWreviews.com
All Rights Reserved
Posted by Clifford Kiyabu at 2:13 AM