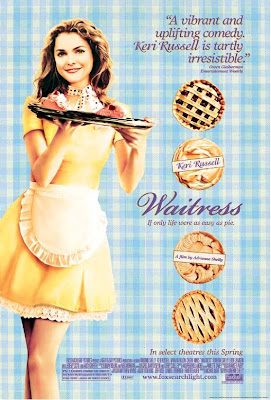 Plot: Jenna is a pregnant, unhappily married waitress in the deep south. She meets a newcomer to her town and falls into an unlikely relationship as a last attempt at happiness.


My Thoughts: So I heard about this movie earlier this year but decided that I would just wait for it on DVD like so many other movies I review. So the other day I finally sat down to watch it. And I must say it quite enjoyable. The movie was fun, very loving and warmhearted. And it had originality to it which I feel is very impotent theses days as there is very little or no originality left in Hollywood. But this movie was a sure fresh sight for these eyes.

love what she does best. Making pies and she dreams of one day entering and winning the national pie contest and taking the money to one day leave her good for nothing husband and opening her own bakery/diner, but when her abusive deadbeat of a husband Earl (Sisto) gets her drunk so he can get his five seconds of pleasure from her, (and yes it’s only about five seconds. LOL.) she finds out that she’s pregnant because of him, and she feels that this is it. Her life is over because now she’ll never be able to leave him now. Until she goes to make sure that she’s 100% pregnant she falls head over into one of the most unlikely affairs with her new hot doctor Dr. Pomatter (Fillion). Now Jenna is in a world of mess and doesn’t know what to do.

Now the movies was great, a little too quirky at times but still good, the acting was nice Keri

Russell who I must say has come a long way from her days on Felicity. With a background showing movies like The Upside of Anger, and even her small role in Mission: Impossible III, is showing that she is coming into her own light away from the show Felicity, which she’s stereotyped for, and does a wonderful performance. And Nathan Fillion also does a pretty decent job playing Dr. Pomatter. And it was really a pleasure to see Andy Griffith back on the big screen. Also Jeremy Sisto’s performance as Earl was great! He make you want to hate his characters and love watching him get owned in the end, all though I liked this movie a lot, in the end I felt that there was something missing. A movie is like a pie with all it’s essential ingredients needed to make it work, and when one, just one of those ingredients go missing, you’re left with an incomplete product, that’s how I felt until I learned what that missing ingredient was.

Adrienne Shelly who directed and co-stared alongside Keri Russell was killed before the movie was done. If you ask me some people see movies as art, others see them for what they are, a movie. I on the other hand tend to see it as a child, and the director as the parent. From start to finish the movie will go through a transforming from child to adult, with the director as the parent raising it to adulthood. But what happens when the parent isn’t there to raise it? You’re left with something missing. And that how I felt, the movie was just missing that magic someone only Adrienne Shelly could give to make it grand.

Final Say: Even though this movie wasn’t as satisfying as I hoped it would be it’s still worth taking a look at. So it’s still rental fare and I recommend it.

Posted by Clifford Kiyabu at 5:14 AM