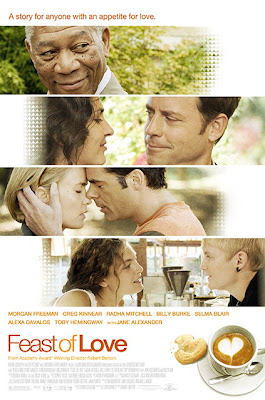 Plot: A meditation on love and its various incarnations, set within a community of friends in Oregon. and is described as an exploration of the magical, mysterious and sometimes painful incarnations of love.

My Thoughts: Director Robert Benton, a man who hasn’t no more than 11 films in his 35 years in Directing movies,

but with each and every film he makes (Or at least those I have seen) comes a story being told in a very careful and humanly way that comes out quite nicely, some could even say his work can sometimes be brilliant, well that is exactly what we get in Feast of Love, the film is deeply multi layered that explores the different personalities in people and the meaning of Love and all it’s heartaches and brakes that comes along with it, it shows the intimacies between lovers and the personal insecurities many put themselves through just to be loved, the film also explores the different types of love, from new love to aged love, and even those who have loved and lost so many times you’re surprised at how they can even continue to love, what, now as to what I liked about the film was how it reveals to you the infidelities that so many people commit shows you how imperfect we are, but to do so is a flaw in our nature, and to error is to be human I guess which is why I loved this film, I also must point out that the film’s dozen or so main players are all connected to each other in some way or another and all are ether in love, falling in love or suffering from not being loved, which I found to be beautiful in a way.

Now I also must point out that this is not, I repeat not your everyday run of the mill chick flick,

no but a very hard and intelligent film that will hit anyone who’s ever loved on some kind of level, now for the guys this is not entirely going to bore you as there is a lot, and I mean a lot of full frontal nudity by Radha Mitchell, Selma Blair, Alexa Davalos and Stana Katic, I swear there are so many scenes in here that got me by surprise I lost count, not to mention easily half a dozen sex scenes in this film that is so explicit I kid you not I had to check the DVD box just make sure that I was watching a Romance-Drama and not a Porno, which will without a doubt satisfy any red-blooded man on this planet while the ladies will be happy to know the film contains strong multiple love stories that will fill you with joy as well as break your heart. The only problem I had with the film was it’s plot holes that kind of left few things unexplained in the film, but other than that this was great all around.

The story centers around an elderly man named, Harry Stevenson (Freeman) a man who him and his wife, Esther Stevenson (Alexander) has just lost their son to drug overdose and while

trying to cope with he observes the many people in his live, as he sees new loves begin and old ones fall apart he leads advise to these individuals hoping to help them make the right dissection while at the same time trying to figure out if he himself made the right dissection with his son, while the story shows his best friend, Bradley Thomas (Kinnear) who just can’t get any luck as his wife, Kathryn (Blair) leaves him for a woman and his new girlfriend, is cheating on him with someone else, and a newly young couple Oscar (Hemingway) and Chloe (Davalos) who have fallen head over heals in love with each other, now they must battle over a great deal of obstacles if they want their relationship to survive, from Oscar’s abusive alcoholic father, to trying to become a full on financially independent.

Now as to the acting, Morgan Freeman is probably one of the most talented actors I’ve ever

seen on camera, and he only proves my point in yet another fantastic role, and actor Greg Kinnear gives an outstanding performance, which I must say is kind of sad because he is a great actor that is greatly underappreciated in Hollywood when yet we have horrible actors left and right making more films and getting paid more than him, truly sad, and though Selma Blair’s role in this is greatly small, her acting proves to be a great asset to the story, and Alexa Davalos who does a great performance that equals her beauty and touch your heart. Also Radha Mitchell did a great performance that had me wowing ber acting and her beautiful body, actor Fred Ward did a great job in making the viewer hate his very guts as the no good abusive alcoholic father named, Bat. And last but not least actress Jane Alexander did a wonderful performance playing as Morgan Freeman’s on-screen wife, Esther, there was times during the movie that had me believing they where a loving married couple.

Final Say: Overall I really liked this movie on more than one way, and even though it had that problem with the plot holes and the few unexplained things I still liked it and highly recommend it.