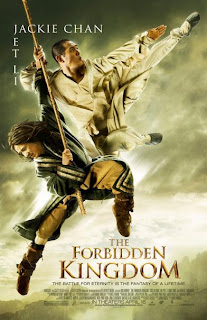 
The best part about “The Forbidden Kingdom” is that it isn’t a bad flick. Oh believe me, the film could be much, much worse. Don’t believe so? It came out the same day studios dumped “88 Minutes.” But all joking aside, “The Forbidden Kingdom” is better than what many are saying. Some reviews commented on how it is too silly, which it is. Other reviews are saying that it isn’t as fun as the film should have been, which is also true.

And for a film where the two masters of Kung-Fu Cinema come together just isn’t as impressive as it should have been.

More than five hundred years ago, the Monkey King (Jet Li) was the most powerful kung-fu master ever, but he was only powerful with his staff. Once the Jade Warlord (Collin Chou) takes it away from him in a battle where the Monkey King is defeated, the staff is later lost and the Monkey King becomes a frozen statue. In present day, the American Kung-Fu Flick Geek Jason (Michael Angarano) walks into a pawn shop to buy some bootleg Shaw Brothers flicks and sees the same exact staff. The kid isn’t sure what the artifact is, but he leaves it alone.

That same exact day, a few bullies force Jason into helping him to break into the pawn shop ran by an old man. (Jackie Chan) Once the old man gets shot, Jason picks up the staff and runs away, but falls of the roof of another building during a chase. He’s sent back in the past, where the Jade Warlord has been ruling the world for many years now. Jason, demanding to get back home, meets an immortal named Lu Yan. (Jackie Chan) Yan fills him in that the staff he has in his possession was once owned by the great Monkey King, who is now frozen.

Yan, Jason, and Golden Sparrow, (Yifei Liu) who has a grudge against the Jade Warlord herself, make it their mission to travel through the dangerous lands to get to the Forbidden Kingdom and rightfully put the staff in the hands of the Monkey King. Oh, and there is a Silent Monk who wants to bring pain to Jade Warlord also, played by Jet Li.

For a film that really shouldn’t have been as good as it was, it definitely pays a lot of respected to earlier kung-fu flicks instead of just becoming a fantasy epic. I should bring up that I am a big kung-fu fan. I can remember back to my earliest of ages that I sat down on my floor, watching one Asian fight off twenty other Asians. I sat through the epics of Chuck Norris, Bruce Lee, Jackie Chan, Jet Li, and others. I watched the first installment of “Kill Bill” just for the reason of the kung-fu fighting, not actually knowing anything about the plot or the actors. Now you all know why I approve of the “Rush Hour” films, right?

But even though I don’t have many problems with the final product, it could have been so much better. The meeting of the two action masters should have really been more eventful instead of a film like this. Ever since Hollywood has been doing kung-fu flicks, things just aren’t the same. They have Jackie Chan starring next to Jennifer Love Huge-Tits and Jet Li next to Jason Statham. While I have no problem with a little bit of mainstream every now and then, I have a huge problem with trying to find an audience when the subject isn’t the audience type. This film should have easily been the type of film that all kung-fu fans would have praised. Instead, it is a family kung-fu flick, which means that there is little blood, the violence is sort of campy, and the battle between the two action heroes is nothing short of tiring.

I have nothing but respect for what the film is trying to accomplish. If the filmmakers were trying to create a kung-fu flick that would appeal to everyone and not just kung-fu fans, they succeeded. But other than just respecting the kung-fu cinema and not actually being a kung-fu film itself, it isn’t as eventful as it should have been. It acts less than a kung-fu flick and more like “Stardust.” Even the final battle is similar to “Stardust.” It’s just that the two Asian women in the film don’t get uglier as the film goes by.

I’ll admit that some people who go into the film expecting nothing will come out with something special. The American hero, played by Michael Angarano, isn’t cowardly, prude, or boring like Shia LaBeouf’s character in “Transformers.” Instead of whining the entire time asking to go home, he sucks it up, acts like a man, and does what he has to do. And besides, he is a film geek. I don’t have any beef with film geeks like that.

But while it isn’t the fault of Jet Li and Jackie Chan, the few action sequences aren’t really as entertaining as they should be. They’re not violent and, if I was to be really nice, I would call them silly. I’m not that surprised because it is PG-13 and it is supposed to be a family film. But I really was expecting much more from the meeting of the two guys for the first time. I wished for the two to come together and have a bloody brawl. The biggest problem with the film is that they fight within thirty-five minutes of the film and not in the finale, but by then, you’re already asking what gives.

“The Forbidden Kingdom” is better than most family films, but it isn’t as good as some old classic kung-fu flicks. Still, I would like to see an R-rated matchup against these two action stars.

Oh, and the Monkey King? What the hell are they, two?
Posted by TonyD at 8:16 PM