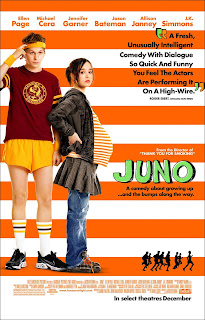 
A teenaged girl and her friend sit her parents down to tell them both something very important that would affect her life forever. The girl’s name is Juno, (Ellen Page) a sixteen year old wise-cracking rebellious teenager. When Juno tells her parents (J.K. Simmons and Allison Janney) that she is pregnant, they begin to ask her questions such as “What are you going to do with the baby?” and “When did this happen?” When they ask her who she did it with, she responds simply, “Paulie Bleeker.”

Her dad responds back, “I didn’t think he had it in him.”

That is the type of humor that you will find in such a film like the Academy Award winning film “Juno.” Originally intended to be a low-budgeted indie-flick, “Juno” grossed over $140 million, making it a profitable flick. Many early reviews claim it to become funny, hilarious, and warm-hearted. Many critics, including Roger Ebert, called this film the best film of 2007. Even stripper-turned-Oscar winning screenwriter Diablo Cody managed to pick up an award at this year’s ceremony. And being whether or not you like it, it doesn’t resent the fact that Cody didn’t try and create something new, even after all of the baby flicks from the last year (including “Knocked Up” and “Waitress”).
But after people started to hype about it too much, I realize that many people who once claimed how much they loved the film immediately started to hate it. They supposedly can spot pop-culture dialogue gone wrong coming from a mile away, and those that once said that Juno learns her mistake at the end of the film later claim that she never did. I’ve stuck by the same opinion since I saw it for the first time the day after Christmas, and I still think that “Juno” is as good as it was the first two times around.

Juno, after telling her parents, her best friend, (Olivia Thirlby) and Paulie Bleeker, (Michael Cera) she decides to give the baby to a married couple who can’t have children. While looking in the penny-saver under the “Desperately Seeking Spawn” section, Juno finds the perfect parents for her unborn child – Mark (Jason Bateman) and Vanessa. (Jennifer Garner) She likes both of them, but she gets along with Mark the best. Mark shares the same interests as her, in both music and film. While carrying around a good few extra pounds on her chest, she tries to sort out her situation with Paulie, who still obviously has a crush on her.

The script, written by ex-stripper and blogger Diablo Cody, is just slightly uneven for the first ten minutes. Yeah, it is no surprise that the people in “Juno” don’t really talk like this, nor does anyone else on the outside. Hell, I’m a teenager and I rage with words like fuck, shit, and crouch. But after the first ten minutes, “Juno” starts to work better than it should. The characters are really likeable and it feels like that we have known them for a longer time than just the time we have spent with them. Not only is it an accomplishment for all of the strippers out there, but to see a blogger win an Academy Award really makes me look forward to the future of blogging.

I don’t know about Jason Reitman receiving an Oscar nomination this soon in his career, or even if he is worthy for one with his direction of “Juno,” but I’ll admit that he is pretty damn good. For only his second film, he creates a film that balances comedy and drama just about equally. Like “Thank You For Smoking,” he doesn’t only show how pregnancy separates you from your friends and classmates, but he shows you that it is a sign of growing up. Unfortunately for Juno, she doesn’t know what it means to grow up. Jason Reitman understands that about his character and decides to examine her even further with her love-life.

The movie is ultimately owned by Ellen Page. Her character is easily one of the most likeable characters of the year. Let’s check back to one of the earlier scenes in the movie when Juno is walking through a crowd of people in her school. No one moves out of her way and she has to dig her own way through. By the third trimester, when she is larger than ever, everyone stands clear and gets out of her way. This shows how we view at pregnant teenagers today. We don’t think that pregnant adults are so controversial anymore. It has basically become the subject “when is the right time to do it?” Ellen Page understands that in these two perfect scenes.

The biggest problem that I found with “Juno” was the music. The first time around, I’ll admit, I never really paid much attention to it. The second time that I saw it during the Best Picture Showcase it became apparent just how annoying the music was. Every song, done by The Moldy Peaches’ Kimya Dawson, should have been another part to the story. What it turns to be is a bunch of annoying singing on the same subject: love. Can we get any more fucking clichéd? That being the only problem, it shouldn’t really bother anyone who only plans on watching this movie once and only once.

“Juno” is a really good movie and is better than what most people are saying. I’ve learned to just give up on those followers of people who once liked the movie but now hate it. Another movie that is subjected to that group of hatred is “Napoleon Dynamite.” Let’s hope that I don’t hate this movie anytime sooner than I did that film.
Posted by TonyD at 3:46 PM