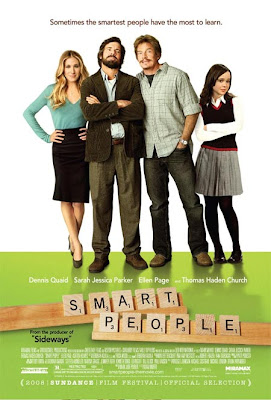 Smart People’s title itself reflects on the film quite a bit. Yes, the characters themselves have intelligent backgrounds, but more so than that they have that intelligence embedded inside them, even when it is hard for them to admit, working against them. The film itself is a very smart film and it is very interesting how it deals with these characters, who are essential to the film as well as to each other, each influencing the other to become the best person they can even through the struggles that all of them are facing.


Lawrence Waterhole (Quaid) has become a very cynical person since his wife died. He is a colle

ge professor, but doesn’t even have that same passion for teaching that he once thrived upon. Teaching is just a job to him now that he attends to, blind to his students. One night after Lawrence falls attempting to climb a gate, he ends up in the hospital. His doctor, Janet Hartigan (Parker), was one of Lawrence’s old students. Janet had a crush on him, but Lawrence still doesn’t even know her or remember who she is at all. Lawrence gets to know her soon enough, as they begin dating. As this wasn’t a big enough change after all of these years, now Lawrence’s brother, Chuck (Church) is back in town and begging for a place to say. Lawrence and Chuck don’t have the best relationship. He just finds Chuck to be irresponsible, lazy, and undependable. However, after his accident, Lawrence is not permitted to drive for awhile. So he agrees to let Chuck stay at the house if he agrees to be his chauffeur.

At first Lawrence’s daughter, Vanessa (Page), has a problem with both of these changes. It is clear that she is not comfortable with the idea of her dad being with someone besides her mother. Vanessa claims that her only reasoning for disproving of Janet is that she isn’t right for her dad, which is something she really doesn’t budge on. Luckily, she ends up warming up to her Uncle Chuck a bit more. They end up spending a lot of time together, especially since she is somewhat of a loner. Vanessa obsessed with SAT’s and being an overall perfect student, Chuck tries to teach her how to just kick back and have fun.

The cast compliments each character in this film wonderfully. There have been complaints that Ellen Page is simply playing her character of Juno over again here. She does have some of the edgy dialogue, loner status, and attitude that Juno had, but Vanessa is a completely unique character from her. Vanessa is much more rigid, constantly putting higher and higher expectations on herself. She has to be the best, which has really forced her to grow up faster than she needed too. A major reason for this is the death of Vanessa’s mother as it is obvious that she tries to play mom, feeling it is now her job as the only woman in the house. Although, Juno was forced to make some mature decisions, she was trying to hold on to her youth whereas Vanessa nearly skips over it by choice. I do think that if Page continues to take roles that can be linked to characteristics of Juno then she will be type cast as that. So I hope she takes on some different roles to explore new things.
Dennis Quaid also did a very good job as Lawrence. I wouldn’t necessarily picture him in this role, but he did very well. He showed that he felt pessimistic towards certain things, but he didn’t play this as his entire identity. Towards Vanessa especially regardless of his sarcasm, he was actually very warm to her. Her adopted role as the women of the house played a part of this as Lawrence saw a part of her mother in her. Sarah Jessica Parker was actually very good in this too. This is the first performance that I can remember seeing that she has done this well in. I felt for her and wanted her to be happy with Lawrence, regardless of all of the ups and downs. The hopes weren’t just for Janet and Lawrence as a couple, but just for both of them to get the respect and chances that they deserved and to find and embrace their happiness at the same time.
Thomas Haden Church did very well too, as the one person who challenged the other characters a lot. This seems a bit ironic since he was thought to be the lazy one of the family. He exerted a sense of warmth and care towards his family though. He became especially close with Vanessa as he really just wanted to let her know that it is okay to be a teenager. He tried to show her how to have fun. The relationship became a very interesting one as it crosses the line when they become a little too close. After this point, things aren’t quite the same with them. This leads to Vanessa’s brother, James, played by Ashton Homes. He shows that even though everyone else is having problems, that doesn’t mean that everything is perfect in his life. At times he gets looked past and turns in to the invisible child. Chuck is the one person who actually realizes this and tries to be there for him. I also enjoyed seeing the small roles played by Camille Mana (“One on One”) as James’ girlfriend and yet another student that Lawrence doesn’t recognize and David Denman (“The Office”) who played Janet’s co-worker and friend.
The one complaint I have about this film is the direction that Lawrence and Janet’s relationship went. Obviously, it wasn’t perfect and was something that they had to work on. It was just such a back and forth thing of them fighting or obviously not getting what they wanted out of the relationship. I even think that they could be good for each other if they would consciously work on it and think of the other. We were just being yanked around like a yoyo, so it would have been better if there would have been more of a resolution sooner which ever way it ended up.
As long as you don’t go in to Smart People expecting a comedy, than there is plenty of enjoyment to experience through the film. It is a dramedy and there are some jokes and comedic instances, but just the state these people are in and what they are going through makes it more of a personal film. Although, some of the characters aren’t the most accepting themselves and on paper may seem harder to like, the actors really bring a wonderful life to them. The script it very well written too as well as the dialogue that brings out their personalities and at times the words that they hide behind. Smart People is really about finding truth in yourself and in those around you. It explores finding yourself and the realization that it is okay to forget about what the norms or expectations are and to just do what you makes you happy. Smart People is a wonderful character piece vividly acted by a top notch cast centering around self discovery.

Posted by Kelsey Zukowski at 12:29 PM