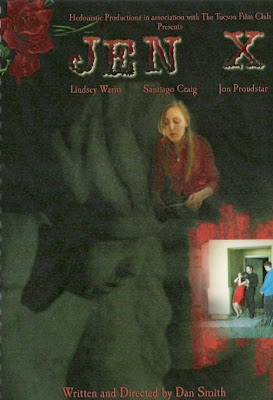 Plot: Generation X has two ways of looking at life, one is wanting to make a positive difference in the world by using their creative talents, while others want riches, success and power right now and not worry about what will happen tomorrow.

My Thoughts: Generation X; A generation that is now in its 30’s and as some have said, “wants it all but doesn’t want to work hard for it, in other words it’s the generation that wants to have what the generation before it (Baby-Boomers) had but not have to go through what they did to get it, with Writer turned Director Dan Smith (J. Floyd King) we get an inside look at a generation that has been labeled by society, but what if we take away the label what do we get? We get Jen X. a short film that may lack in length, but if a photo can say a thousand words, then Jen X has a lot to say that could last a lifetime.

The Story is about Jen X (Lindsey Warm) a young woman who is happy about being pregnant and becoming a mother. But her Boyfriend Bruce (Santiago Craig) is not happy with the new and isn’t at all supportive about the situation and his thrown out because of it, so he heads to his best friend and wife for advice on how to make his girl happy again. Meanwhile Eric (Mike Buck) Bruce’s brother is beaten up by a couple of henchmen working for a Samuel (Jon Proudstar) the man who runs thing is the town they live in and says what goes there, he desires nothing more but a child, and after Eric hears the his bothers girlfriend is with child he set out to have her kidnapped in hopes of getting back on Samuel’s good side.

I’ve been looking forward to seeing Jen X for a long time now, but as some of you know I have had some complications in having it reach me, but alas my problems was fixed and I finally arrived, and my was I pleased to have finally see it. I was really impressed with the production of this film and how it was handled, thing is; Dan Smith manages to tell you a story about an entire generation in no more than a mere 13 minutes and actually have it work in an art-house kind of way. The film deals with how people handle responsibility, life changing situations that will leave some in regret. You have to give Dan Smith credit for doing this when other filmmakers have spent a great deal of time in making films that are two to three hours in length but never making the statement it set out to make, as where Jen X he not only manages to make his point but by doing so in a much shorter time.

Also the cinematography was very satisfying, presenting the film to its viewer in quite the entertaining way, not to mention the score which not only is it fantastic, but matches the film dead on, and also the acting which is great; I give kudos to both Mr. Smith and the entire cast that worked on this protect, my only complaints are one. In one of the scenes the editing doesn’t quite match the dialogue that is being said which clearly reveals the dubbing over the scene. and two. I’d really love to see this movie be given a much longer run time if ever given a second chance, other than that I really have nothing wrong with this film, I recommend seeing it for yourself if you’re in the mood for checking out an Indy short.

You can view this film for yourself by going HERE
TCW
© The Comic Whore 2008.
Posted by Clifford Kiyabu at 3:58 AM