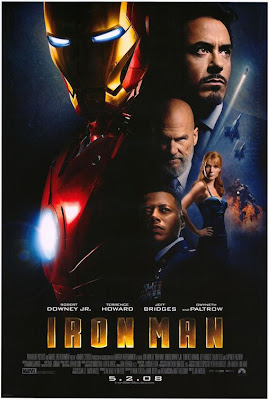 Plot: When wealthy industrialist Tony Stark is forced to build an armored suit after a life-threatening incident, he ultimately decides to use its technology to fight against evil.

My Thoughts: Over the years I have grown to hate films that build up my expectations because it never lives up to its full puritanical and I’m left knocked down by disappointment, and even though I may like the film, there will always be this part of me that didn’t enjoy it as much as I hoped. But finally a hero has come to save me from disappointment, his name, Iron Man. The film not only lived up to my expectations, it exceeded passed it with shining colors all the way to the top. There is without a doubt in my mind that this film will be marked down as one of the greats right next to other fantastic superhero flicks like Superman, Spider-Man 2, Sin City, and 300, and it very much deserves it.

I must say, I had my doubts in the beginning with this one, because

after the sad track record with superhero films lately I started to loss hope in the Comic Book genre (And this is coming from someone with a nick name like “The Comic Whore”), over the last few years it seemed that the studios have only been filming these films so that they could make a quick buck out of the moviegoer audience, with films like; Fantastic Four, The Punisher (2004) , The League of Extraordinary Gentlemen , Catwoman, Elektra, and Ghost Rider (Honestly, I could go on forever ) all have proven to be a great hype builder and end up leaving you unsatisfied, thing is the filmmakers don’t usually give the films the proper justice it deserves, which is not to say that its entirely the filmmakers fault, however a lot of it is, thing is they tend to modernize and change things in the very core of the mythology, which isn’t always a bad thing, however when they keep at it they tend to change so much of it that by the time it makes it to screen it’s hardly recognizable anymore, and I thought that the whole point of making these films was to please the fan base you have? Apparently not, something like that could most defiantly cause someone such as myself to have doubt and loss interest.

Will that is defiantly NOT what I got with Iron Man, what I got is an equal amount of pulse pounding action, intelligent storytelling, fantastic dialogue, and suspense that will keep you at

the edge of your seat the whole way, not to mention a nice mixture of drama and humor throughout. Easley I can say this will be noted down as one of my favorites of 2008, no doubt, also I should mention that the CGI is so well done, so wonderfully handled with care that it surly was a sight for sour eyes. Also one of the real reasons why this movie worked so well is because of director Jon Favreau, he’s a fantastic actor and a magnificent director, he was born to make Iron Man, I honestly can’t think of anyone else who could have given the justice he gave this film, yes he may have made some changes to the original storyline and even did some miner modernizing there’s no doubt to that, , one of the thing s he modernized was moving Toney’s origin from Asia to Afghanistan which was too bad, it actually worked great that way for today’s times, also the other thing they changed which I didn’t like at first was that they changed Jarvis into an A.I. computer program, see in the comic book he was Tony Starks trusted butler who helped him through the most toughest times in his life, and now they turned him into an integrated A.I.

wealthy Superhero with his trustworthy butler (Bruce Wayne and Alfred Pennyworth) so it’s a change that actually works for the better, and aside from all these chagaes he still manages to maintain the core of the comic’s mythology and fully satisfying the true Iron Man fans all over the world by making them shocked and awed having them cheer out in celebration screaming out for more, I for one was thrilled by the very core over this, it was the exact same feeling I got when I first saw Spider-Man on the big screen happening all over again for me, but way batter, yes that’s right, I said it, Spider-Man has been my overall favorite superhero film and I just said Iron Man is better than it, And It’s no big secret that a sequel is now in the works, for those of us who saw the extra footage after the credits know that part two is going to rock even more than this one because what it sets up will be far bigger and epic then this, if you have seen the film but haven’t seen the extra footage at the end of the credits then all I’m going to say is this; Samuel L Jackson as Nick Fury. Yeah it doesn’t get any better than this baby, and if you don’t even know who Nick Fury is than you shouldn’t be watching films like this.

The story is about; wealthy industrialist Tony Stark (Downey Jr.) a man who is known by the world as, an inventor, an alcoholic, a womanizer, and mostly knows for is running a company that

creates WMD’s for militaries all over the world, some would call him a mass murderer for doing such, but a humanitarian and Hero is defiantly not what he is, of course that is until he is captured by terrorist while in Afghanistan testing a new weapon for the united states government, after surviving the act and witnessing that his own weapons in the wrong hands and being held captive to build a new weapons for the terrorist group he comes to relies the error in his ways and instead build an Iron Man suite to break free from the terrorist, once out and back within the US he decides it’s time to undo the wrong his company has doing for years, by sutting down its weapons division and becoming Iron Man so he can rid the enemy who uses his weapons, but his longtime business partner and friend Obadiah Stane (Bridges) doesn’t like the idea of Tony shutting down the companies weapons division and a more sinister plan in store for Tony.

As for the acting; well let me tell you, Robert Downey Jr. was mind blowing, I was greatly

impressed with his performance, he was dead on as Tony Stark, his performance was so good I saw him as the character played rather than the actor playing the character, and there is one thing I can say; despite his troubled past with drug and alcohol abuse, as an actor he is fantastic, and I think Iron Man just brought him back on the top again. Terrence Howard was magnificent, over the years he has shown the public that his acting comes from years of hard work and no role is beyond his talents; he proved that when he played Jim Rhodes with such deduction that now I really look forward to him becoming the War Machine. Jeff Bridges, the dude of all dudes was magnificent as Obadiah Stane AKA The Iron Monger; he gave an outstanding performance giving the character that extra sinister touch it needed. Gwyneth Paltrow was wonderfully fantastic; she gave Pepper Potts the extra charisma and sexiness that made the character work on the big screen, not to mention Gwyneth’s chemistry with Robert gives off this strong bond and attraction between them on the big screen, which is quite lovely to see on screen. and last but not least director Jon Favreau has a nice small roles as none other than Harold "Happy" Hogan, Tony’s chauffeur and personal assistant, it’s always nice to see the director of a film making ether a cameo or have a small role into own films.

Final Say: Iron man was a fantastic film, one I don’t think could have been even possible without Robert Downey Jr. and Jon Favreau behind it, honestly these two men is what makes this comic book adaption work as a motion picture. Also for those of you who are planning to see this let me point out you should look out for a cameo by Stan Lee who plays himself in this, and for Samuel L. Jackson who will be making a pulse pounding cameo as Nick Fury after the credits. I hope to see it again one more time before it leaves theater because this is an exhilarating film that must be seen firsthand on the big screen. I highly recommend it!

Copyright 2008 TCWreviews.com
All Rights Reserved
Posted by Clifford Kiyabu at 12:24 AM