Review: Indiana Jones and the Kingdom of the Crystal Skull (2008) [Reviewed By Clifford Kiyabu] 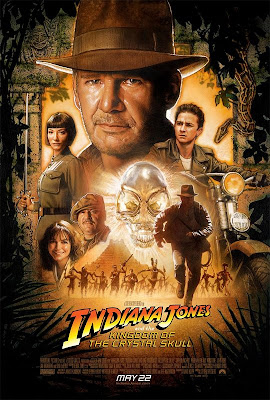 Plot: Famed archaeologist/adventurer Dr. Henry "Indiana" Jones is called back into action when he becomes entangled in a Soviet plot to uncover the secret behind mysterious artifacts known as the Crystal Skulls.

My Thoughts: 1981 the year two great filmmakers of our time came together with an idea in mind, mixing that idea with a talented actor and what was brought to life was something that can only be described as brilliance in its purest form, the film I talk about is none other than “Raiders of the Lost Ark” a film that mixes pulse pounding suspense with none stop action and adventure, and before you could say huh you was give a bit of comedy that loosened the mood a little. Some have said it wasn’t possible to replicate such greatness, and then came the year of 1984; and again we are thrown back into the lion’s den with “Indiana Jones and the Temple of Doom” a Prequel that may not live up the full potential that was Raiders, but still manage to serve up a decent amount of action mixed with chills and humor, which made it a fine addition to the awesomeness that was Indiana Jones, and then alas came the year of 1989. The year we saw our hero ride his last adventure in “Indiana Jones and the Last Crusade” here is where it was all over for fans everywhere, much like the Ark of the Covenant, our hero would be boxed away by the filmmakers and labeled “TOP SECRET” never to be seen again by the likes of you and me, or so we thought. It has been nearly two decades since our wool felt hat wearing wipe cracking hero has been seen by moviegoers alike!, some say that an aged Indy (65) wouldn’t be able to preformed properly like he use to, but Mr. Ford shows everyone age is not a factor as he retunes to take on the mantle of Indy once again, but this time instead of fighting Nazi Germany.

He takes on the might of Communist Russia, instead of facing off against the occult, he up against

KGB operatives looking for the Crystal Skulls. Now after watching this film I decided to set down with some fellow moviegoers like myself in private chats to see others points of views on the film what they hated and what they liked, I do this sort of thing from time to time to research what others think about the film and see how their point of view compares up with mine and try to understand theirs as we talk it over, I feel that the only way to fully experience a film is to talk it over with people who also seen it, well what I found was there are those who liked it (Like myself and a few others out there) and then there are those who said it was bad(a pretty big audience so far), I will explain why some may think that. Most say it didn’t live up to its name and it was a complete waste of time and money.

But I will explane why it’s not as bad as some are claiming it to be. People everywhere are

saying it didn’t quite carry the same torch as Raiders nor does the KGB live up to the villainess that was the Nazis and the occult, and I completely agree, the Commies don’t live up to the evil presence the Nazis brought on screen, some could say that the Nazis had the natural evilness about them that made us all smile whenever Indy killed one of them in the film. And Commies just don’t have that in this, however they still manage to bring some form of evil presence that still fun to see in some way and of course is does not live up to the greatness that was Raiders, Raiders is just a one of kind film that will never be replicated again so I say instead of trying to compare it to Raiders, just like it for what it is, and to explain the other problems moviegoers are having with this; is the film as a whole SC-FI acting take with UFO’s and government conspiracies and such.

when the other three previous films was based solely on a religious take, thing is the first three

films pays homage to the 30’s and 40’s which of course was the War years, and the time of classy films, while the new installment pays homage to the McCarthy era with the ongoing Cold War. So because I didn’t try to compare it with the other and saw it for what it was is probably why I liked it so much, and Yes I will say that the plot is nothing Oscar worthy nor soled, it’s full of holes and the CGI is a bit over used in this as well as a few cheesy scenes that was overly done, but now I must ask, wasn’t that the whole point of the Indy films to begin with, mixing cheesiness with action and adventure with a little hint of chills and thrills that made it all the more worth wild to watch to begin with.

The story is about 19 years after the events in Indiana Jones and the Last Crusade, our lovable

reckless hero Indiana Jones is at it again in another wild adventure, but this time fighting evil Communist during the Cold War. Indiana Jones (Ford) and his partner Mac (Winstone) is abducted by Communist operatives lead by Irina Spalko (Blanchett) and taken to Area 51 where supposedly all the secrets the government is hiding from the world is hidden, while there and being forced to help them find the Crystal Skull he is betrayed by his partner and must fights them off, with a little luck on his side and some smarts he manages to escape with his life, however he must remain on the run trying to figure out just what the commies want with the Crystal Skull, and his mission to do so he comes across a young man who goes by the name Mutt (LaBeouf) who claims his mother Marion (Allen) went missing in shout America and if anything happened to her that Dr. Henry Jones is the man he should go to. Now together the two of them form a team to find the Crystal Skulls and find his mother.

As for the acting; Harrison Ford is back and kicking butt in this new installment of the Indy

films, at the ripe age of 65 he manages to pull off some magnificent acting as well as some incredible stunts, YES folks he does all his stunts in this one, and still shows us as old as he is he still has some years left in him. Cate Blanchett does a great job, although her accent may sound a bit fake from time to time she still pulls off the whole main villain thing quite nicely, not to mention she really rocked that hairdo of hers and has a very climatic drive by fight scene with Harrison Ford and Shia LaBeouf that was just awesomeness all around. As for Shia LaBeouf, I really like his acting I think he’s going to be a real somebody with his talent and with all the good jobs he’s been getting lately with Disturbia, Surf's Up, Transformers and the to be realest later this year film Eagle Eye, one cannot deny his is a fantastic actor, now with that said I must say is acting in this was somewhat forced and at times a little fake, which was a bit of a disappointment for me because I’ve grown to like his acting greatly, oh well maybe in the next Indy film he’ll do better.

As for Karen Allen, she was, well bad! Yes. She didn’t do a good job in this at all, which was a big

downer because I loved her character out all the female characters in all the Indy films and if I could pick one to return it would have been her because both Harrison Ford and her shared this magic on screen that screamed “destined to be together” but this time around it was like she wasn’t even trying, and her performance was way too predictable and somewhat annoying, however I will say it was nice to see her acting on the big screen again. As for Ray Winstone, he just annoyed the hell out of me from the get go, but then again wasn’t that his job from the beginning/ so you could say he didn’t do too much of a bad job in this one. John Hurt was fantastic, he’s a great actor, but I found in to be somewhat out of place in this film and wished they had given him a much better place in this film or at least write a little more depth into his character. Jim Broadbent also did a great job, and must say he manage to pull off playing a new character introduced into the film which is to replace the late Denholm Elliott’s character Dr. Marcus Brody, who ironically dies some years before the film takes place.

Finale say: I had a fun time watching this, and I will say the film has some problems but none of which ruined the film for me, I will be looking forward for this one on DVD when it does come out and giving it another go around. I highly recommend it.

Copyright 2008 TCWreviews.com
All Rights Reserved
Posted by Clifford Kiyabu at 5:55 AM