Review: Lars and the Real Girl (2007) [Reviewed By Clifford Kiyabu] 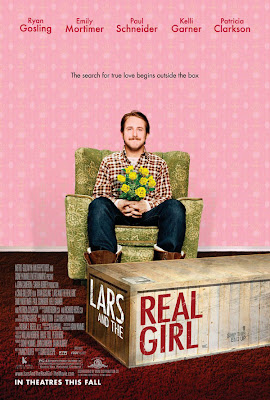 Plot: A delusional young guy strikes up an unconventional relationship with a doll he finds on the Internet.

My Thoughts: Loneliness, a thing we all dread, even those of us who won’t admit it, it’s a troubling thought and feeling to have, to think that one may remain his/hers life alone, without someone to call their own is just heart wrenching, some of us will do anything just so that we don’t have to be alone, now add that with a lifetime of oppressed emotions and what you’ll get is Lars and the Real Girl (2007). Now before I go into details let first say I had a bit of skepticism towards seeing this film at first because of the plot just did bold well with me when I read about it online. But how could I call myself a respectable critic if I let this one pass me by, huh? So I figured I’ll just give it a look see so I can get it out of the way, well what I got was nothing short of sheer brilliance, I was blow away by how this movie could grab a hold of my emotions and bull me in every which way you could think, the filmmakers really came through with making such a outstanding film, managing to make you laugh, cry, and downright feel awkward the whole way.

And it’s because our main character, “Lars” played by Ryan Gosling, wants to be normal so

badly and just treated like everyone else. But he suffers from being extremely too shy, which renders him unable to communicate well with others, so because of this he spends every minute of his free time in complete solitude, isolating everyone in his life from co-workers to family, because of this he creates a form of delusion in which he sees his Realdoll as a real person, and creates a relationship with it. I know I know you can stop laughing now, just the thought about must make you laugh or feel a little weirded out by that aren’t you? That’s exactly how I felt, but in all honesty when I did see it I felt kind of sad. Because when you look, I mean really look at it, you have to ask yourself this; what have I done that was so out of the ordinary that others would call you a weirdo for, just to feel the warmth of love from another? I bet everyone who reads this has at least one memory that they are too embarrassed to say.

Now if what we do for love is alright, then what is so wrong or in his case weird and not alright?

Sure everyone in the story is affectionate and opened to him and willing to show him love, but he doesn’t understand how to comprehend it like others, which I can’t help but feel sad for because in a way aren’t we all like that, aren’t we all to some degree unable to comprehend what others can. But like I said it’s not all sad, it has a great deal of comedy to it as well, see it’s not long after his doll arrives to the town, the townsfolk play along with the idea that she’s real just so that it may help him get better. But not a moment too soon they accept him for what he is and accept Bianca (the realdoll) into the town as a member of their community, the men think of his Bianca as a dream girl because it’s sex anytime with no talking after, while the women like his doll as the new girl to the town, ultimately as strange as he is they welcome him as a normal person, now because of this his shyness is all but gone, which puts him on a somewhat crossroad within himself, a part of him wants to keep Bianca in his life, but the other part of him is slowly letting go Bianca and allowing himself to feel among those who really exists, this of course where it becomes hear breaking, because you see that his delusion didn’t just affect him, it affect everyone in the whole town, it gave them hope, something new, something wonderful that connected them to each other, and most of all it brought them closer together as a community. You could say his mental illness help them more than it caused problems.

and Wife (Mortimer), he’s always keeping himself isolated from everyone, never going out on dates or with friends, he seems like a person who is most comfortable in complete isolation, but one day while at work he comes across a website that sales Real Dolls, fascinated with this, and the fact everyone is grilling him over the fact he’s alone and needs a girlfriend, he falls into a state of delusion and strikes up an unconventional relationship with a doll he names Bianca. Soon when his brother gets wind brother and wife gets wind of this they flip out and what to have him see a doctor or worst have him committed, but when the towns local doctor noticed a change in Lars attitude, she see he’s more talkative and more willing to converse with people now that he has Bianca she tell them not to do anything and let him play it out, because without them knowing this delusion of his is actually helping him overcome his fear of being around people, to that the doctor convinces the whole town the play along as well, soon the whole town will come to see Bianca as a loving member of this small community.

As for the acting; well I must say Ryan Gosling steals the show with yet another fantastic

performance, when you look at his track recurred of films like The Notebook, Stay, Half Nelson, Fracture, it’s clear that as an actor he can do no wrong with ever roles he does. Paul Schneider does an ok performance, although I felt his acting was a little weak at times and it seemed he wasn’t 100% focused with his role during the film, he just felt like he was missing something that keep him off target, but that could just me I guess. Emily Mortimer was fantastic, she give a great performance which was strong and on target the whole way. Kelli Garner also did a great job; she and Gosling share this on screen charisma that is genuine, you could really feel that there was some kind of attraction between the two. Patricia Clarkson also does quite an impressive performance as Dr. Dagmar.

Final Say: Lars and the Real Girl is a film that is humorous and heart touching, it will have you laughing and touch you in a way few films can, I for one really enjoyed this film and could help but drop a few tears of both laughter and sadness while enjoying such a great film which I’ll admit I didn’t think I would, because I didn’t care for the plot when I first heard about it, but all doubt went away after I got into watching it. I highly recommend it to be seen and enjoyed