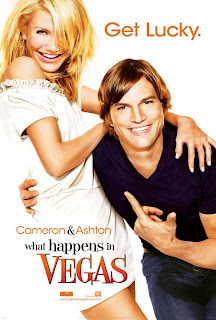 Okay, come on. Let’s just admit right now that we actually saw it coming. “What Happens in Vegas” isn’t the least bit impressive. It won’t win any awards anytime soon (though it may win an MTV Movie Award or a Razzie in the future). Who actually thought that the movie was going to be good, and then I will cut the shit out of the person who said “I did” with a sharp blade.

Though I pulled stunts like this before (not since February, but hey, by some of the films I seen, you would have thought that I’ve been doing it for the entire year), “What Happens in Vegas” is actually the least harmful film out of the bunch of films you all tortured me with, which includes “Mad Money,” “Welcome Home, Roscoe Jenkins,” and “Meet the Spartans.” (Just typing and reading the title of that movie leaves a bad taste in my mouth that gasoline can’t even provide.)

Jack Fuller (Ashton Kutcher) is a Brooklyn boy who can’t seem to finish anything he started, other than sex and annoying the audience. He gets fired by his OWN DAD (Treat Williams, and how messed up is that?) for slacking. Joy McNally (Cameron Diaz) is a fun city girl with dreams of having a great marriage and career, but ever since her boyfriend (Jason Sudeikis) broke up with her in front of all of their closest friends, she hasn’t been herself. Neither of them knows one another, but one night in Vegas turns into a six month-nightmare.

So Jack and his best friend (Rob Corddry) go to the one place that you can forget all of your troubles – Vegas! And they are surprised (and aroused) to be put in the same hotel room as Joy and her best friend. (Lake Bell) (SHIT! I never told you that Joy went to Vegas. Aw well. Are you really surprised?) Anyway, they complain, get penthouse suites, VIP limos and other fun packages, and drinks. Jack and Joy drink and gamble themselves blue in the eye, and wake up the next morning married. After fighting in the casinos like two hungover idiots, Jack puts Joy’s quarter in a slot machine, and wins three million bucks.

But being that it was Joy’s quarter and Jack put it in, and being that they are still married, the judge (Dennis Miller, no other) sentences them to six months “hard-marriage.” This means that Fuller and McNally have to live with each other for six months, plus visits to a marriage counselor. (Queen Latifah) In the end, they both start to realize that they have problems, but they need to work them out in order to get a piece of that money.

Jack Fuller is like the fucking anti-Christ of cinematic characters. It is like they put Ashton Kutcher in a room filled of douchebags and told him to learn from them, then do everything that they did but on camera. This guy does nothing that impresses me the slightest bit. The most Kutcher does for our audience is annoy the living shit out of them. In one scene, he really asks Rob Corddry’s character if a girl party is a trap. Now if these girls are paying more attention to themselves than you, what in the tittie-monster hell do you think?

That being said, Cameron Diaz isn’t much better. Despite her good looks and romantic comedy charm, the only thing that she brings to the character is her awkward expressions in some scenes. But for those of you who were only going to see this film for Diaz, you can let out a sigh since she isn’t the worst part of the film (surprisingly). That honor goes to Queen Latifah. With such shitty and hipster dialogue, it makes me blow any little bit of respect that I had for her after “Hairspray” and “Life Support” were released last year.

I’ll admit, I laughed twice throughout the film, but that was all of the help from Rob Corddry and Lake Bell. It is the chemistry of these two that keeps the movie going. Whenever the two are not on-screen together (or not on-screen by themselves), the movie takes a slow and boring turn. Their love-hate relationship is enough for me to demand that you see it at once. But the Kutcher-Diaz relationship? Yeah, you should just wait for DVD.

You have to let guys write romantic comedies. It isn’t sexist; it’s true. Especially in comedies like “What Happens in Vegas.” The film is terrible because a lady wrote the film. If you notice, MEN always complain about their wives. It isn’t the other way around. Obviously, screenwriter Dana Fox doesn’t understand that. I should have knew that beforehand, considering that epic film “The Wedding Date.” That movie… SUCKED.

You should be lucky if you haven’t seen that movie, because “What Happens in Vegas” is much much better. But that’s not hard. How in the world this made more money than “Speed Racer” I will never know.
Posted by TonyD at 12:55 PM