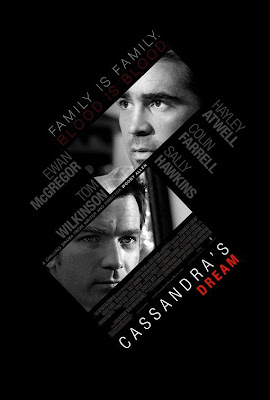 Woody Allen only solidifies his place in the thriller genre with his newest London gripper Cassandra’s Dream. After a couple of years dabbling in the “upper-class” society, he focuses on the “lower-class” and how desperate one can get for money. His Match Point from a few years back really gave him a new poison potion for filmmaking. Years of making his quirky love tales, and over-the-top comedies, he finds himself more at home with these dark and serious tales involving tightly knitted families. After a few production delays, Allen’s Cassandra’s Dream is well worth the wait.

Our premise boils down to one simple thing: a life of lies. Two Blaine brothers are in desperate need of money. Ian (Ewan McGregor) is part owner of a little restaurant with his father. He wants to start businesses of his own though. A dashing sexy actress named Angela (Hayley Atwell), who can be seen as some what of a femme fatale, only increases his need for money. Lies of all sorts come out of his mouth and he even borrows Jaguars from his brother’s garage he works at to drive her around and impress her. Now his brother Terry (Colin Farrell) is a mechanic by day and, on the down low, a gambling, pill popping, booze drinking addict by night. Only his brother knows of his severe gambling problem, not even his sweet caring girlfriend (Sally Hawkins). Yet, he seems happier than Ian even though he’s a degenerate gambler whose luck ranges from the highest of highs to the lowest of lows. He owes loan sharks 90,000 pounds and his job can’t pay for that.

What I loved about this film is the way our two brothers want so badly to get out of the gutter and into the good life. It’s such an exact character diagnosis that Allen puts on screen. While they are in the gutter they seem happy. When the movie opens the two brothers are ecstatic when they have a chance to by a nice little wooden sailboat. They name it Cassandra’s Dream after the dog who won a race for Terry. It’s the only sign of happiness we see from the two. The rest of the movie they’re carrying a massive amount of weight on their shoulders contemplating their offer given by their rich Uncle Howard (the great Tom Wilkinson). Family loyalty and values is what he beats into their heads. Uncle Howard turns out to be their puppet master.

Uncle Howard has such a huge array of businesses he owns. The thing is though he built his empire on lies and cheats. Ian and Terry go to him in need of money but he counters the offer by asking them to take out a fellow business partner who may know too much about Uncle Howard’s flaws and lies. This scene when he tells them this will stay with you. It’s that good. 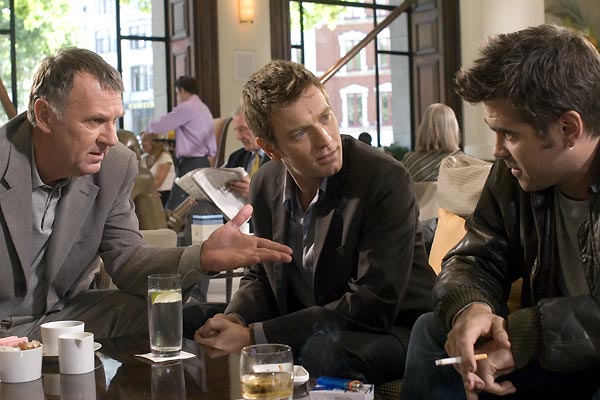 Unlike Before the Devil Knows You’re Dead, similar film about desperate brothers, Cassandra’s Dream offers Ian and Terry a tempting decision. They are nice guys; always conning their way to get what they need, not what they want, to get by but never once did the word murder cross their minds. In the other film the two brothers are evil and they come up with the idea to kill. Woody Allen offers us up two normal Joes and how far they will go for a good lump of money. Most of all they seem like “real” brothers. Always willing to offer the other a helping hand when needed even if they don’t have the money, this proves to be the key to the film to show their strong bond they have for one another.

In the end it’s how each brother moves forward after the decision they come to make. The entire middle half of the film to the end is solely a study based on how they come to reason with the decision they will make. One can’t sleep and goes on a guilt trip while the other lives life to the fullest extent. The ending is only suitable because this film isn’t based on nobody else except for the two brothers. Allen spotlights Ian and Terry the entire film that when the ending does come we don’t care about nobody else’s reaction. Allen puts “real life” into these characters and they do what any sane person would do after and before the matter is over.

Oh, the Woodman and his knuckle balls! Most movie goers will find it hard to believe that there’s a movie out so early into the 2008 season that contains gripping thrills, unnerving tension, and high wire emotion that results in leaving its audience upended. You can’t deny a good film, or a great one for that matter, just because of its release date. We should be jumping with joy because Allen is generous enough to present us with such a good and satisfying film. You can call me a sucker for Woody Allen films but most of all call me a sucker for a good fulfilling film when I see one.
Posted by David Dominic DiMichele at 3:47 PM