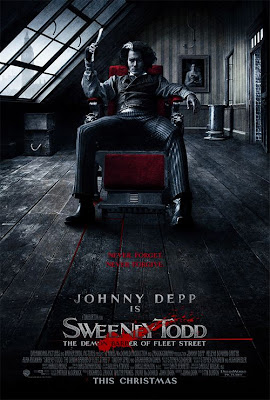 Plot: Sweeney Todd a.k.a Benjamin Barker returns to London after being sent away by Judge Turpin with the help of a sailor, Anthony Hope. He opens a barber shop above Mrs. Lovett's Meat Pie Shop were she sells "the worst pies in London." With the help of Mrs. Lovett, Todd tries to rid of all the people who have ever done him wrong and hopes to be reunited with his daughter, Joanna, who is now Judge Turpin's ward.


My Thoughts: So I saw Sweeney Todd the other day. And I must say that I was impressed with it greatly. But before I go into the review I must first point out that this is nothing like the original stage version. This is Tim Burton’s take on Sweeney Todd, and all those who’ve seen director Tim Burton’s previous films know what kind of level he likes to take movies to. But if you don’t know that I’ll say this. It was dark and extremely disturbing. But in a good way. Mixed with a little dark humor and romance. And just down right gruesomely bloody all around. This was like watching a masterpiece being unveiled right before my very eyes. Few movies I can say have fill me with such a mixture of emotions in such a good way.

the best barbers in all of London, and married to one of the most beautiful women in all of London, Lucy (Kelly) and live happily with there newborn daughter, Johanna (Wisener) . But when Lucy’s beauty is seen by Judge Turpin (Rickman) he has Benjamin Barker arrested and imprisoned for crimes he never committed, nor tried for. Put after fifteen years or so pass Barker makes it back to London in hopes of finding his wife and daughter. But to his shock he is informed that in his absence his wife poisoned herself to death, and his now fifteen year old daughter is under the wardship of Judge Turpin who is also planning to woo her in to bed with him. Now Benjamin Barker is driven to such level of madness that there is no way coming back. Now he has become a barber again in London and changed his name to Sweeney Todd and plots his revenge on those who did this to him one shave at a time with the help of his newfound friend Mrs. Lovett (Carter) who owns a bakery downstairs of Sweeney Todd ‘s barber shop. And agrees to help him get read of the bodies after killing them, by putting them into pot pies and selling them to people in the bakery.

Now like I said earlier this movie was outstanding, great singing

and great acting that just sums up to a fantastic performance all-around. Johnny Depp gives the character Sweeney Todd a much deeper and sinister look and feel, and proves that he is as good a singer as he is an actor, not to mention Helena Bonham Carter who was frightfully beautiful and a wonderful singer as well giving the film a sense of dark humor that is twistedly funny in a psychotic kind of way. And Alan Rickman fantastic in the role of Judge Turpin giving the character this real feel of villainy, why is this? Well it’s because some actors are meant for some roles. Some are meant to be a hero while others are meant to be villains, and Alan Rickman is just one of those actors that is great as a villain. And Timothy Spall did a great performance as Judge Turpin’s lackey, Beadle Bamford who you just love to hate. Also newcomer Jamie Campbell Bower did a surprisingly great job playing as the young and still wet behind the ear sailor, Anthony Hope who falls madly in love with Johanna. But as good as everyone’s music performances I have to say that Jayne Wisener had the best voice out them all and being a newcomer herself was also a big surprise for me, but I must tell you if you liked the play than you may or may not like the movie. But if you didn’t see the play or you are just a downright Tim Burton fan than you will love this movie and want to see it again and again.

Finale say. This was probably one of the best movie I have seen this year alone with a few others. And what a great way to end the year too, with a blast of a movie like this! I highly recommend!

Posted by Clifford Kiyabu at 3:06 AM