Review: There Will Be Blood (2008) [Reviewed By David Dominic DiMichele] 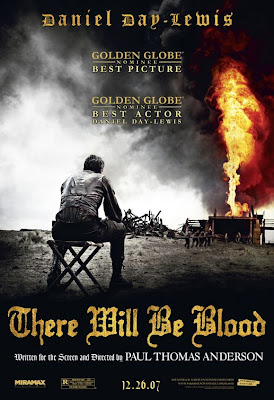 The first fifteen minutes of Paul Thomas Anderson's widely controversial and thematically charged There Will Be Blood is silence, except for the haunting and harrowing score by Johnny Greenwood from Radiohead. The stark and dry landscapes of the west during the turn of the 19th century (1898 we pick up) provide us with a miner and a couple of his partners mining the dry grounds for silver. Anderson starting this sprawling epic in this oddly manner shows dividends not only to his directing ability but also on his approach to the film which spans three decades. It reminded me of the first twenty minutes of 2001: A Space Odyssey: as the apes are fussing around with what they have; bones and rocks. They amuse themselves while an eerie silence and some unnatural music play up the untouched territory of the stark and dry landscapes that engulf them. It's only when they wake up and find something they weren't looking for: a black rectangle of an object. It alters the way the apes think and go about their everyday activities. In There Will Be Blood we get the same exact set-up but with humans and a different kind of object. Here, the miner Daniel Plainview (Daniel Day-Lewis) accidentally stumbles upon oil. Lots of it. This oil will not only change his life and bring him riches but will also bring him ambition, corruption, and extreme hatred. Let's not forget about the big one: Greed.

Plainview is bred differently than everyone else in the movie. He does whatever he wants, says whatever he wishes, and acts the way he wants to. Nothing short of what his darkened, black heart desires. From 1898, and jumping to 1911, the transformation of Plainview is massive. Once digging for silver and minerals, he now finds himself ordering his men around, dealing with huge deadly machinery, setting up camp on family's properties, and becoming greedier by the minute. Now, his profession is an oil man and running a so-called "family" business with his 12-year-old son H.W. (Dillon Freasier). After being tipped off that there's a whole ocean of oil under the Sunday family ranch in Little Boston, California he thrives on the opportunity to capture oil and the weakened family that owns it.

Planning a quail hunting trip with his son just to get inside of the Sunday ranch is genius of Plainview. When he gets in deep enough he strikes with an offer that has the feeble father of the ranch going gah-gah over, while his son, the estranged, extremist preacher Eli Sunday (Paul Dano) starts to question the offer. Knowing what's under their ground Plainview begins to get hungry for oil and land. He utters in his brooding and cocky voice to the town's real-estate agent: "Why don't I have this, or this?" Before you know it Plainview becomes almost untouchable as he owns pretty much all the land in his foresight. Like a snake charming the crowd, Plainview charms the citizens of Little Boston and promises such great turn-arounds in their community, and other communities that felt his wrath, but when he feels comfortable around people he lets them know: "I have a competition in me. I want no one else to succeed. I hate most people." Most people include his son, step-brother, all the town of Little Boston, and maybe even himself.

There's one theme in particular that Anderson explores here and it really struck me like a drill bit strikes oil. It was the church that Eli Sunday runs. Often it's said that the people who act religious really aren't. False prophets. I see this trait offered in Eli. Anderson views him as an over-the-top, freakishly scary, evil kind of cult preacher. His congregation seems to be full of lost souls just attending his sermons because they think that it's right. He has his hands wrapped around them and even the all the town, and when Plainview comes around he literally makes an ass out of Eli. The tow form a heated rivalry that results with both of them making an ass out of each other. Solely due to the fact of money and power that fuels both of these people's lives.

With little ties from Upton Sinclair's 1927 novel Oil!, Anderson shapes a movie that is full to the brim with such ambition and a film that's beyond epic proportions, it's monumental. He locks in on one specific matter and person and the vice that binds the two never let's its grip loosen by any means. The land that cinematographer Robert Elswit captures and the scary-real sets that production designer Jack Fisk creates for us is a world of man devouring man, which is by no means a world for anyone less than Daniel Plainview's status. We see what happens to the weak beings and the faint of hearts. Anderson doesn't acknowledge any women in the movie because he knows that they're not significant in this world that's shown to us on screen and the relationship between father and son resonates with such deep meaning.

Elements from such classic films like Chinatown (John Huston's character), The Treasure of the Sierra Madre (Fred C. Dobbs doesn't trust anyone with his gold findings) and of course Citizen Kane (Charles Foster Kane buying everything he can, resulting him walking like a zombie through his enormous mansion). Kane looked back on "rosebud" and dwells on the lost innocence, Plainview, on the other hand, remembers a huge house during his innocence that he loved to look at and hoped to live in it, now, older and greedier, he looks back on it and it makes him sick.

The music runs throughout the entire film it seems, fusing each scene together at such a high level of intensity that we're waiting for something to explode and we get that in a classic-in-the-making climax. Paul Thomas Anderson easily creates the year's best movie and Day-Lewis easily delivers the best performance of the year as he portrays a vicious, venial, egotistical, charismatic mad man. There Will Be Blood is based on issues of the past but don't look past the fact that it rings true in today's day and age where everyone is simply out for themselves.
Posted by David Dominic DiMichele at 3:55 PM