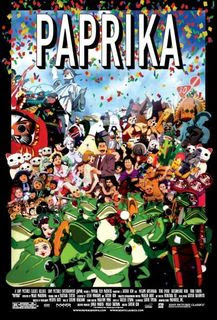 Plot: When a machine that allows therapists to enter their patient's dreams is stolen, all hell breaks loose. Only a young female therapist can stop it: Paprika.


My Thoughts: Paprika is another movie I so badly wanted to see in theaters, but it was only showing at the Hawaii film festival here in Honolulu and I unfortunately didn’t find out about this until after the film festival was over. So I had searched high and low at the local mom an pop stores to see if any had the Japanese DVD. But I was out of luck. So I had to do what most people do these days. I waited till it was realest on DVD here in the US. And my god have I ever been so excited in my life to see an anima such as this, the last time I was like this was for Katsuhiro Ôtomo’s Steamboy, and was that a blast.

So after finally watching I must say that not only did the movie meet my expectations, but it exceeded it. the animation was so stunning it was pure pleasure for the eyes, as well as the complex highly intelligent plot that is like food for the mind. And the score which is done by Susumu Hirasawa is pure energy for the soul. I man have you ever heard music that was so emotionally powerful that it had you stuck with a smile on your face every time you hear it? I did when I heard the score to Paprika. I love it so much that I just bought the soundtrack off of Itunes and I’m listing to it as I write this very review.

The storyline is about a group of therapists us a machine to tap into the dreams of the mentally insane to help them get better. But when the machine goes missing all hell breaks loose the someone is using it to enter the dreams of people and putting them under there control, but the more serious problem at hand is that whoever is doing using this device is also breaking the boundaries between dreams and reality and causing our dreams to become reality and It looks like all hope is lost, but there is one person who can stop whoever it is that is doing this, and her name is Chiba Atsuko a young female therapist who’s alter ego is Paprika an alter form that can enter the minds and dreams of all to help. But can Paprika stop this madness before it takes hold of the entire world?
Now I must worn you that this is not like your daddy’s cartoon

from the old days and is in no way something for children to watch as it is Rated R for violent, language, and sexual images. So please be careful while watching this if you have little ones in the house. and for those of you who don’t really watch anime probably wont care too much for this but I still hope you watch it as it is one of the best anime movies and stories I’ve ever seen, and for the true anime fans, well this is without a doubt something that will bring tiers to your eyes out of pure joy and something that is going to be remembered for many years to come.

Final Say: I can’t express anymore on how much I love this movie without giving away key points to the plot. So I will leave it at that. I highly rearmament it!

Posted by Clifford Kiyabu at 2:49 AM