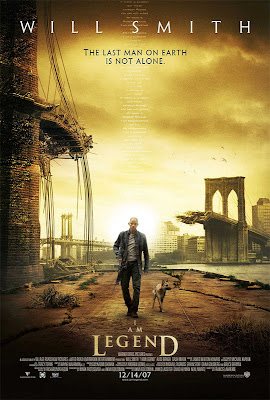 Directed by: Francis Lawrence
Written by: Mark Protosevich and Akiva Goldsman
Genre: Drama / Horror / Sci-Fi
MPAA: Rated PG-13 for intense sequences of sci-fi action and violence.
Released: 14 December 2007
Starring: Will Smith, Alice Braga, Charlie Tahan, Salli Richardson, Willow Smith, Darrell Foster, April Grace, Dash Mihok, Joanna Numata, Samuel Glen, James Michael McCauley, Marin Ireland, Pedro Mojica, Anthony C. Mazza, Steve Cirbus, Emma Thompson.
Plot: Robert Neville is a brilliant scientist, but even he could not contain the terrible virus that was unstoppable, incurable, and man-made. Somehow immune, Neville is now the last human survivor in what is left of New York City and maybe the world. For three years, Neville has faithfully sent out daily radio messages, desperate to find any other survivors who might be out there. But he is not alone. Mutant victims of the plague -- The Infected -- lurk in the shadows... watching Neville's every move... waiting for him to make a fatal mistake. Perhaps mankind's last, best hope, Neville is driven by only one remaining mission: to find a way to reverse the effects of the virus using his own immune blood. But he knows he is outnumbered... and quickly running out of time.
Rating: 9/10
My Thoughts: Okay so I got to see I AM LEGEND on opening day. I know what your gonna say. Why take so long to write a review??? Well it’s because I been oh so busy with the holidays just around the corner and haven’t been able to get a round to it. Hell I haven’t really been able to watch a lot of movies this month and this is the last month in the year so usually I try to watch as much movie as possible, but that’s just not happening this year. So anyway, yeah I saw it on opening day, now let me tell you that I have read the book to I AM LEGEND which is written by Richard Matheson.
And there have been two other movies that are based on the book as well. The first version being “The Last Man on Earth (1964)” starring Vincent Price. And the second version being “The Omega Man (1971)” starring Charlton Heston. And now this version which makes it the tired time now starring Will Smith. All three movie are really good, but none is close to the book

s original story which I’ve read by the way. But before I go more into the films review, I want to say that a lot of people talk so highly about the book and many make it out as this masterpiece.
Well I’m gonna come out and say it, I did not care for the book! I kind of found the book to be too depressing, and the ending left me saying what the fuck! So when I heard about this movie being closer to the book

than the two previous films I keep saying to myself; please oh please don’t end like the book did! But I was greatly empress with how the outcome of the movie went, and the direction Director Francis Lawrence took it.
So the story is about in the very near future a doctor creates a virus that can cure cancer and a list of other big diseases in our lifetime forever. But this cure comes with a price, one that the hole human race will pay for. The virus started to change people into a vampire like monsters that feed on flesh and blood. One man was appointed to stop this virus before it spreads all over the world. That man is named Dr. Robert Neville (Smith) a brilliant military scientist who is based in New York city, or also known as ground zero. The plan was simple, cut off Manhattan island from the rest of the world and stop the virus while it was isolated to one location. But the brilliant doctor could not find a cure in time and the virus managed to make it off and spread across the planet. Know three years has passed and Robert Neville managed to survive somehow because he is immune to the virus and spends his days getting supplies and trying to find a cure. While spending his nights just trying to make it to the next day.
Now one of the things I liked was the movie has a strong and deeply emotional take on the story

, you see that with every passing day being the only none infected human being left in New York takes a toll on him, you see that he is slowly loosing it, and that the only thing holding him together is the promise he made that he would make things right and find a cure, and his dog, who is the only thing left connecting him to his family. One of the other things that I liked is the major differences between the book and the movie and the take on it overall story, now major differences are usually a bad idea, but in this case it was great. For example the book takes a very scientific stance, where as the movie takes a very religious stance. Also the ending which I just loved, I found it to very satisfying compared to the books ending, which didn‘t settle with me to well because I found it to be a little too depressing. Now there was two things I did find to be a little displeasing. The first is I felt the movie was a little too short with a running time of only 101 minutes from start to finish, I felt that a movie as epic as this should have run longer (nothing shorter than two hours at lease) than it did, but since the director manage to still pull off telling the story and keeping it strong in that short of time I’ll let it slide. The other problem was the movie’s tagline “The last man on earth is not alone” is a little misleading. But I wont say how because it will ruin the movie for you, you’ll just have to watch and see what I mean for yourself. Now as for the acting, Will Smith is magnificent as Robert Neville mixing some light humor with a powerful and emotionally dramatic performance that will have you drooping tears from your eyes.

Finale say. I greatly enjoyed this movie and can’t wait to see it again someday. I hope you see it and enjoy it as much as I did. But remember if you didn’t read the book than watch the movie first and than read the book so you can decide which one you like better. Otherwise you might not want to see the movie if you think it’s just like the book. I highly recommend.

Copyright 2008 TCWreviews.com
All Rights Reserved
Posted by Clifford Kiyabu at 3:10 AM