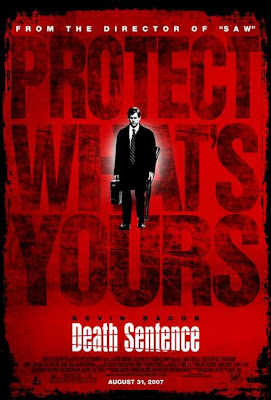 did it meet my expectations but it exceeded it. Now most of you who see this film will probably think to yourself that you seen something like this before, well that right you have because Death Sentence Is the original sequel to “Death Wish" (1974) which starred Charles Bronson as Paul Kersey. But because Brian Garfield the author of the book Death Wish hated the movie so much and all the sequels that followed he said that he would never sell the rights to Death Sentence, but low and behold it seems that he changed his mind and sold it, but from what I’ve heard he made a deal that this time around he would be greatly involve in making the film unlike the past Death Wish movies.
So to make sure that the movie could be as good as the book some

miner changes had to be made with the approval of Garfield of course. the changes were instead of the storyline taking place in Chicago it takes place in South Carolina and the movie has no connection what so ever to the Death Wish films even the character’s name isn’t the same, they changed the character’s name from Paul Kersey to Nick Hume played by Kevin Bacon (Mystic River) who does a extremely good job playing Nick Hume a man who’s a big shot executive that lives the good life with a loving wife named Helen (Preston) and to wonderful sons Brendan (Lafferty) and Lucas (Garrett). Life seemed good until one night when his oldest son Brendan (Stuart Lafferty) is killed right in front of him as part of a gang initiation ritual for an urban gang’s newest member and since the legal system can’t really do anything due to the fact that he is the only witness to his son’s murder the killer is off the hook but not for long because as sooner as the guy is set free Nick (Bacon) avenges his sons

death by killing the guy who killed his son, but doing in his sons killer does not go without consequence as he soon finds out the guy was more important than just a simple newbie the gang and now the gang as declared war on him and his wife and son.
Now what I liked was the way the movie was made; the beginning has this warm happy family feel to it than your given this sad dramatic feel which quickly turns into this dark gritty film style that screams the movie Saw all over it. But you know what? It works and man it works really good. Another thing I liked about the movie is as you watch the film you see as Nick (Bacon) a man that did nothing wrong in his life slowly fall down the dark path of vengeance. So before I end this review I must tell you that the cinematography is great, the acting was terrific and storyline overall touch me in a way that left me with a question that I keep asking myself over and over again after watching the movie, If you witness a loved was killed right in front of you how for would you go to avenge them? For me, I keep coming to the same conclusion over and over again; I would kill the ass holes who did it even if it meant I would die too.

Finale say. I really enjoyed Dteat Sentence a lot, it was a heart pounding rollercoaster ride that never lets up. I highly recommend this to anyone who likes a good Drama / Thriller.

Posted by Clifford Kiyabu at 5:17 AM