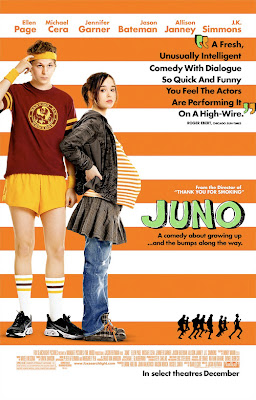 Plot: Faced with an unplanned pregnancy, an offbeat young woman makes an unusual decision regarding her unborn child.

My Thoughts: So after hearing nothing but good things about Juno I decided to check it out, after all it is nominated for 4 Oscars so what could I lose? Well let me tell you this movie was fantastic, it was cheesy but in a good way while at the same time being intelligently funny, plus what I thought was the best part was the fact this film takes a rather risky chance involving teen-pregnancy, talks of abortion, and putting a child up for adoption. Three topics in our country (United States) that seems to be taboo, but by taking this risk the filmmakers proved that sometimes taking risks is what makes a movie all the more with it to see, which of course was a nice change for once. Juno is film that shouts out girl power all around while not offending it’s male audience, in fact it keeps both men and women fairly entertained by nonstop laughter and a sweet heartwarming story that will make both gender fall for this film, Also Juno make a great date movie for all ages, may you be a coup

le that 16 or 61 this is for you, And not to mention the cinematography was beautifully done in an art-house style that works so nicely for the film as well as it’s soundtrack which consists of Indy rock that works great.

The storey is about Juno Mac Guff (Page) a 16 year old teenager who gets pregnant from her long time best friend Paulie Bleeker (Cera). but refusing to become another victim of her circumstances she looks over her options, like abortion, raising the child as a single teen parent, or adoption. Unable to go through having the child aborted she decides the alternative choice, adoption and looks for a family that will raise her child the best way possible.

The acting was wonderful. Ellen Page did a great performance as Juno by making her character a mixture of witty, funny, and downright straightforward. She is a blunt individual who isn’t afraid to speak her mind loudly and proudly, she has proven that she is without a doubt an up and coming star. Michael Cera did yet another great performance, much like Superbad he makes his character dorky, geeky and somewhat shy, which I (and I know I‘m not alone here) can relate to. And I was happy to see Jennifer Garner back acting in such good films like the Kingdom and now Juno, for a good while now I thought her career was coming to an end because ever since she married Ben Affleck her career had gone for good to bad to almost ugly, but after seeing her act in The Kingdom, and Juno I happy to say I think she’s coming back! As for Jason Bateman, I will admit I have never been a fan of his work, no reason really, I just never cared for his work, but I will say he does a fairly nice performance in Juno, so I will give him that. Allison Janney also is great in this movie as Bren MacGuff, Juno’s wiseass stepmother who I couldn’t help by like because she is both hard and supportive at the same time and also has quite a few funny moments with actor J.K. Simmons who by the way is perfect for the role of Mac MacGuff, Juno‘s father who is loving and always in support of his daughter no matter what her decision is.

Final Say: Juno is a charming, and warm hearted film that will make you laugh and for some cry. The only problem I had was the dialogue because I don‘t think many teens talk as they do in this film, although I could be wrong since it‘s been a few years since I was a kid. ’laughs’ but if you can get pass that than I d say this is a near flawless film the should be seen on the big screen. So I leave you with this short quote that you wont understand until you see the movie “ That ain't no Etch A Sketch. This is one doodle that can't be undid, Homeskillet”. I highly recommend it.

Copyright 2008 TCWreviews.com
All Rights Reserved
Posted by Clifford Kiyabu at 3:28 AM