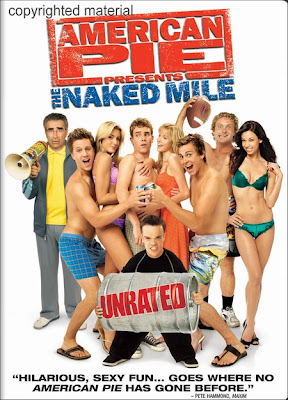 Plot: When Erik Sifler gets a free pass to do whatever he wants from his girlfriend, he and his two best friends head to see his cousin Dwight for the Naked Mile and a weekend they will never forget.


My Thoughts: So I saw The Naked Mile the other night and I must say it was more

disappointing than Band Camp. Now for those of you that don’t know what The Naked Mile is, it’s the fourth installment in the American Pie series. And it seems that the movies get ridiculously dumber with every new installment. Plus the fact that actor Eugene Levy reprises his role as Mr. Levenstein (or as we know him best as Jim’s dad) was somewhat out of place, it made sense way he’s in the first second and third American Pie films because he’s Jim’s dad, but when he showed up in American Pie Presents: Band Camp that made me say “huh” not to mention all but two of the original cast returned for Band Camp. And now for The Naked Mile only one.

Now what I found to be a little annoying is the fact that the most recent American Pie films all focuses entirely on the Stifler family, which doesn’t make sense because as I remembered the first three American Pie films correctly, Jim Levenstein (Jason Biggs) was the main character and Steve Stifler was only a side character. And sure his role got bigger in the second and third film but he always remained a secondary character in the films. Than here comes the fourth installment with Steve Stifler younger brother Matt Stifler, which acts if just like his brother.

And than just when you think there are no more Stifler’s to show up we get Erik Stifler, the cousin of Steve Stifler. Now the thing that annoyed me the most was the fact they made all the Stiflers act the same way, now that was a big no for me because the first Stifler acted the way he did because he was like that, and it was understandable why is brother would act like that too. But to make all the men in the Stifler

family like that was just down right silly and had me rolling my eyes at the screen.

his family name as he is still a virgin, worried that he might graduate a virgin he tries to get his girlfriend to have sex with him, but after telling him she’s not yet ready she gives him a weekend guilt free pass to have sex with any girl or girls he wants with no guilt what so ever. So him and his buddy’s go to visit his cousin Dwight Sifler in collage to take part in the Naked Mile and enjoy a weekend they’ll never forget.

Now you probably already know that acting is bad. And I mean BAD! But what they seem to do is cover up the bad acting with lots and lots of hot naked girls in most of the movie, which does it's job as you'll only be staring at the hot T&A all over the place.

Final Say: the movie isn’t worth owning nor really worth running out the door to watch, but if you’re in the mood to watch a another dumb teen comedy or just trying to kill some time than check this out. Other than that I wouldn’t recommend it.

Posted by Clifford Kiyabu at 3:52 AM