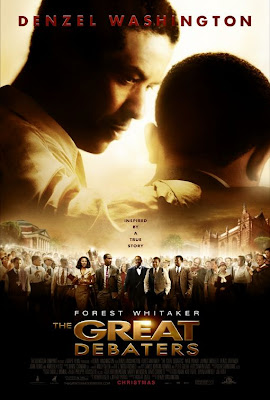 Denzel Washington had a great year in 2007 with The Great Debaters being released with in a month of another great success of his, American Gangster. Washington not only had a major role in the film but directed it with a raw feeling of truth. The Great Debaters takes place in 1930’s Texas and is based on the true story of Melvin B. Tonson, the professor and advisor of Wiley College’s debate team.

Melvin Tolson (Washington) is a very rigid professor, but an even tougher couch. With a new year it is time to hold auditions for this year’s debate team. Many people audition but only four people actually make it, two of them being alternates. The team is made up of Henry Lowe (Parker), Samantha Booke (Smollett), James Farmer Jr.(Whitaker), and Hamilton Burgess (Williams). Henry had just recently came back to school. He would really be happy with just reading books all day long and expanding his knowledge, which shows in his intelligence. Samantha is the first girl who has been on this debate team and that is a role that she really had to fight for. She probably has the most impulse to argue what she believes really matters. James struggles quite a bit as he is thriving to be the one debating rather than a researcher. This chance means so much to him and he is thriving to be on the spotlight.

they will need not just for success but to raise awareness. The team does very well, winning every debate against colleges all around the country. This becomes particularly noticeable when they beat the previously reigning best black college. This even brings the attention of Caucasian colleges. At first they seem to be at somewhat of a disadvantage as the minority race. The students argue for change though and they continue to defeat their opponents. Melvin is at the debates supporting them, but he ends up having some problems of his own. He is working with the white farmers in town forming a union. The sheriffs department is very suspicious of him. They attack the secret meetings and later they even arrest Melvin. Controversy is setting in around him and the students of the debate team that manage to stick together have to learn how to make it on their own. The stakes are high as they are now up against Harvard for the national title.

Denzel Washington does a terrific job as the strict, controversial, yet very influential teacher and coach. The injustices that have been done to African-Americans really drive him to discourage things like that from happening again. Denzel Whitaker was actually named after Denzel Washington and it is clear that he is very capable of being a quality actor like Washington. His character of James was the youngest on the team. He had so much passion even though many upsets went along with this. Forest Whitaker played James’ father very well. He does seem to be too hard on him during much of the film and unable to understand how important the debate team is to his son. We realize that this is just because he wants the world for him. He just wants James to be protected from the many terrors of the world. In the end, Mr. Farmer has nothing but pride for James. Nate Parker and Jurnee Smollett have great chemistry together. They fall in and out of love and back again. It comes to be more than just an attraction though. They have the same type of desire for the bettering of mankind as a whole. When they do fight it is just because of the pressures and conditions they are under making them more likely to clash.

The most chilling scene in the film comes when Melvin is driving the team to their next competition. It is late at night and most of the students are asleep. They come across a horrific scene of a man not only hung but also burnt at the stake. The dead corpse hangs limp as it has been reduced to the cheering of an angry mob. Torches surround it by people with joy and hate simultaneously in their eyes. As soon as their car is spotted the mob comes after for them because he sees that they are African-Americans. The car is attacked and they barely make it out of there alive. This really screws with the kids’ minds. They pose questions of who that man on the stake was. What did he do to get treatment like that? Did he even do anything at all or was it just because he had darker skin than they did? The reality of the situation is that they live in a society where something like this can happen and nothing may be done about it. Murder can be gotten away with yet some minor mistake can be punishable by death. Growing up in a world like that where you are at the disadvantage can make you afraid to even live. This just pushes the characters to make others realize that the world needs to be made more fair for everyone.

The Great Debaters is a very intelligent film that explores the value of knowledge among young people. It shows what encompasses debating, but doesn’t resort it to a hobby. It is the start to improvements for everyone in the world. Many times Caucasian opponents agree that there is not equality or fairness for different races, yet they say, “Now is not the time for change”. The film challenges that by saying yes, now is the time for change. It will always be the time for change and to fight for what is right. The longer you wait, the more comfortable people get with things and the harder it is to move away from those thoughts that have become instincts. Although, the film takes place in the thirties and things have improved immensely since then it is still relevant because knowledge, truth, and discussion is what will spark the opportunity to have the liberties that should not be denied of anyone. Overall, the story was very touching and a huge amount of emotion resulted in this very well done film.
Posted by Kelsey Zukowski at 6:31 PM