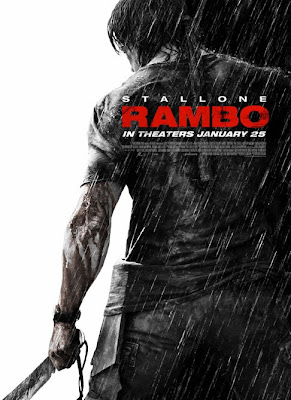 Plot: In Thailand, John Rambo (Stallone) assembles a group of mercenaries and leads them up the Salween River to a Burmese village where a group of Christian aid workers went missing.

My Thoughts: Many people have said actor Sylvester

Stallone was done for, an actor that’s long past his prime, but after viewing Rambo I say defiantly, I say this old dog has still got some fight in em and damn it I say we give it to him, first Mr. Stallone pulls off a stunning comeback in 2006 with Rocky Balboa , and than blown away with Rambo which many people laughed at the idea of a 62 year old John Rambo kinking it old school style on a bunch of bad guys. Well I have to say to that is it looks like Mr. Stallone got the last laugh as Rambo has gotten some nice reviews by moviegoers all around and is doing pretty good at the box-office with $18,203,876 in it’s opening weekend, taken the movie cost only $50 million and is rated R by the MPAA which I can’t understand how they gave it only an R when movies have done less than what they did and got worst. But I guess I should be thankful for it getting only an R and keeping all the good stuff in, but the thing that I guess I’m still having a problem with is the fact that such a good film like this only gets a second place to a shitty excuse of a film like Meet the Spartans! That to me falls hard in the WTF! Category, and shame on you, if you in anyway helped the movie become number 1 at the box-office or even think about seeing it in anyway, if so than I hope Chuck Norris pays you a visit at your home and roundhouse kicks you in the head! but enough about that crappy movie and back to the review.

Okay so like I said Rambo is a nonstop action flick that never lets up, but besides all the gore and the 200+ body count in this movie I think the part that got to me the most was the realism to this film like the story for example which is involving the current problems going down in the country Burma with such things like genocide, gorilla warfare, kidnappings which is very well putting fear into the population of the country, and by putting this into the film makes John Rambo seem real and make the feel overall even greater, plus like I said with the action not letting up well this move goes all out with extremely graphic kills. Like in one particular scene in the movie involves a women only seconds away from being raped by a solder and right from behind the gut Rambo grabs him by the neck and brakes the guy’s windpipe and while the guy is still alive but unable to scream Rambo slowly rips the guy’s neck open while making sure that the last thing the guy sees is that women as he feels excruciating pain before he dies, and that’s just one of the kills in this movie! Now if you liked the description of just that one scene from the movie than I can guarantee you’ll love this movie overall.

The movie is basically about it’s been 20 years since our hero John Rambo has been in war, and

lives a very quiet solitary life in a small village with locale villagers in Thailand, and like all things in time our hero is forgotten and is aged but he is happy to be out of trouble and just living his life, but when a group of Christian aid workers asking for his assistance in providing a passage into Burma so they can bring aid to the small village he refuses but eventually agrees letter word is brought to him that it’s been almost two weeks and the Christian aid workers never been heard from now he is ask to provide passage into Burma again, but this time a group of mercenaries hired by the church's reverend, but what they don’t know is the Christian aid workers is being held captive by a military group of over a 100+ solders, which means it’s time for our hero to come out of retirement and kick some major ass.

Now there has been some debate over Sylvester Stallone acting in this because he doesn’t really give any expression except from one which is rather cold looking, but to me it works very well because he is suppose to be Vietnam vet that has seen way more war time that any man should have (Rambo 1, 2, and 3) and after all the years and years of killing how do you expect him to even have an ounce of the man he once was? The answer is you can’t because Rambo like any other human in that situation would be damaged beyond repair from such a life of violence, so for Sylvester Stallone to so that was fantastic, but that’s just my opinion.

As for the rest of the cast; Julie Benz who some you may remember her from her days on the

once hit TV show Angel does an okay job playing as, Sarah, one of the Christian aid workers and the only one who could convince Rambo in helping them in the first place and only main reason why he would go back to help them, and although it’s never said or confirmed she and Rambo kind of have this moment between them. First time actor Maung Maung Khin did a great job playing, Tint the commander of the militant squad in Burma which I was impressed with because he sure did such a great job in making us hate him so much. And of course actors Matthew Marsden, Graham McTavish, Reynaldo Gallegos, Jake La Botz and Tim Kang do pretty nice jobs in this film playing as the mercenaries and even though their roles were rather small it still help add to the movie overall not to mention each and everyone one of there character’s were uniquely different in everyway, and of course actor Paul Schulze is great playing as Michael Burnett, the leader of the group of Christian aid workers, who I found to be greatly annoyed with throughout the film, but than again that how his character was made to be to all an all it worked out magnificently.

Final Say: Rambo is without a doubt going to be noted down as one of the best action/sequels of 2008, and better yet looks it’s only the beginning of the year the supposed bad luck quarter for films all around and already have I seen three great films (Cloverfield, Juno and Rambo) that all deserve to be called great. I highly recommend.

Copyright 2008 TCWreviews.com
All Rights Reserved
Posted by Clifford Kiyabu at 5:57 AM