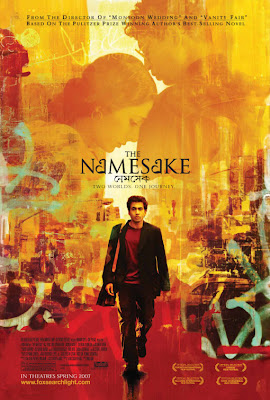 Rating: 8/10
My Thoughts: A name we all have a one, but many of us don’t know why we have it, or better yet what history

does it carry. They say every name or namesake has it’s reasons. And The Namesake shows us just that, a powerful and greatly moving film of learning and understanding ones past, the film takes us to both past and present showing us two incredible individuals, a father who gives his son a name that means so much to him that no one will ever truly understand why, and a son who doesn’t relies just how important his name is to his father. the namesake is a touching and emotionally moving film that you will appreciate. I must admit I knew nothing about this film but the fact that it starred actor Kal Penn in it and it wasn’t a comedy, but man was I glad that I didn’t know much about this film because for me it was an incredible adventure that had me sold with in the first five minutes of the film, the on location filming was beautiful, showing you the beauty that is India and the cinematography was so beautifully done it should get an Oscar nomination. I am however greatly surprised it didn’t because such movie like this should never get unnoticed.

culture and the rebelliousness of children from there parents, like for example; Ashoke and his wife, Ashima are married by there families instead out of love, and yet over time they learn to love each other and become soulmates, and there son ,Gogol and daughter, Sonia who rebels from the old traditional why of marriage of being married off to another Indian, by it’s culture overall but slowly by slowly there son Gogol begins to fallow his Indian cultural roots as do many after they hit maturity, which I found to be beautiful and somewhat poetic in it’s message, which says in life we all must take this journey of self discovery in one’s self and in one’s culture before becoming fully free and shine into your own light.

The story is about Ashoke Ganguli (Khan) and his son, Gogol Ganguli (Penn) Ashoke experiences

a horrible tragedy as a young man while reading a book by Nikolai Gogol, which through this tragedy he later will use the author’s name as his son’s namesake, while his son however does not know of that part of his father’s past desires to change his name because how stupid it may sound and because he is laughed at for having such a name like Gogol, and the more and more he tries to rid himself of this name the more he is reminded what it means to be named after this author, and ultimately learning the truth behind the mystery of his name.

As for the acting, well I can tell you now I was greatly impressed with Kal Penn because in this movie he shows a more mature side and that he’s more than just another actor sticking to the boundaries given to him, and if you ask me I liked it because after seeing him in films like, Van Wilder, Harold & “Kumar Go to White Castle, Van Wilder 2: The Rise of Taj, I thought oh his end is near, even his small role in Superman Returns I thought was somewhat laughable, and than he did the horrible Epic Movie which I thought would without a doubt be the end f his career, but after seeing him in The Namesake I must admit he made a magnificent comeback with an outstanding performance.

As for the rest of the cast, actor Irfan Khan did a fantastic performance Ashoke Ganguli that 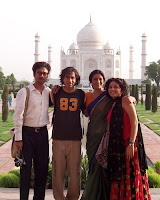 most both powerful and hart warming, and even though this is the first film I’ve ever seen him in I will be looking out for other films by him and looking forward to future film by him as well, and actress Tabu who plays Ashima A. Ganguli was great, her performance was beautifully done, not to mention her beauty is only matched to that of her voice which is wonderful, also of course actress Zuleikha Robinson does a fantastic job in seducing the audience with her deadly good looks and her great acting, I first seen her co-star along side Viggo Mortensen in Hidalgo which was an ok movie, not the best but certainly not the worst, just ok, but than she really showed she is an actress that is willing to go the limits in a role, see Rome Season 2 to see what I mean and than you’ll understand, and last but not lest Sahira Nair does a nice performance as Gogol’s sister, Sonia, and though her role in this film is small she still manages to do her part, as well as being this brother sister relationship with actor Kal Penn that feels real.

Final Say: overall this movie was greatly enjoyable and worth watching again sometime, though my only problem was the running time which for your information is 2 hours and 2 minutes, I felt it should have been just a little longer as for me this story was over too quickly. But other than that I highly recommend it.